The Salvation Army’s major fundraising campaign, the Red Shield Appeal, has kicked off in all states and territories with a number of launches and other public events. 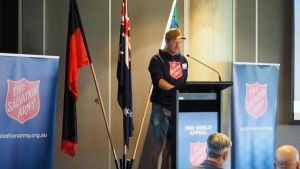 Salvos and friends across Greater Geelong met under the blue and white stripes at Kardinia Park to kick off the Red Shield Appeal for 2021, raising $13,500. More than 90 supporters combatted the chilly weather with an energised auction, before Salvation Army staff from across the region shared stories from the coalface.

“We live and breathe our mission in all we do to leave no one in need and are grateful that you share your spirit of goodwill,” said Lieutenant Colonel David Godkin. “Your willingness to give brings hope to others when they need it most.”

In Tasmania, staff at Divisional Headquarters gathered for their own ‘Red Day’ – and their outfits didn’t disappoint. Red vests, socks, kerchiefs and hats were in full force, and staff raised more than $100 to start off the crucial campaign. The Red Shield Appeal in Tasmania will officially launch in Hobart on Thursday.

Following their sudden three-day lockdown across the Perth and Peel regions, Salvos across the state focused on the digital launch of the Red Shield Appeal. Corps engaged with social media, while the state team works towards their stated Red Shield launch on 12 May. Pending restrictions, they hope to have 400 people at the event as they hear stories about the work of The Salvation Army across the state. 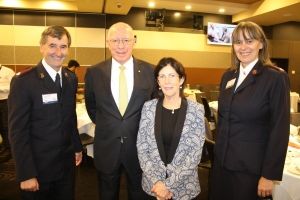 The Governor-General, His Excellency General the Honourable David Hurley AC DSC (ret.) was the special guest at the launch of the Red Shield Appeal in Canberra, which was held at the National Press Club.

He spoke about the importance of showing kindness and commended the Army’s work. He also paid tribute to long-time Salvation Army volunteer collector Alan Jessop, who retired this year after decades of collecting at the Canberra Centre.

Tara McClelland, Salvation Army speaker and ACT Young Person of the Year, spoke about how privileged she felt to work for The Salvation Army in assisting people who have experienced domestic and family violence and homelessness.

Various donations were received, with Public Relations Secretary for the ACT, Major Wendy Hateley, saying a pair of Red Shield socks signed by the Governor-General sold for $5000.

A breakfast launch event in Brisbane got the state’s Red Shield Appeal off to a good start with about $277,000 raised. 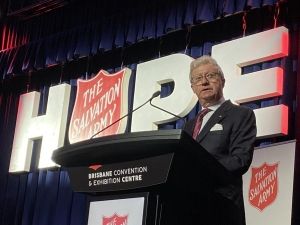 Queensland Premier Annastacia Pałaszczuk said she was “absolutely delighted” that the Queensland Government will kick off the Red Shield Appeal with a $100,000 donation. Brisbane Lord Mayor Adrian Schrinner donated $10,000 on behalf of Brisbane City Council.

The ballroom breakfast was attended by about 530 people who heard about the focus of this year’s appeal – homelessness. Nicole described as “heartbreaking” the numbers of people suffering hardship and injustice in the community and the way the Army was able to help many of them showed the value of its work.

“When you see someone who is homeless, stop and have a chat with them and offer them a meal,” said the outgoing chair of the Army’s Queensland Red Shield Appeal Committee, Nicole Hollows.