Army invitation to an 'experience of a lifetime' Army invitation to an 'experience of a lifetime'

Salvationists across Australia are being invited to be part of a group to attend this year’s Laura Quinkan Dance Festival in Far North Queensland.

Australia’s longest-running Aboriginal and Torres Strait Islander cultural festival is back, and a Salvation Army contingent is planning to attend.

Queensland’s Laura Quinkan Dance Festival was cancelled last year due to COVID, but event organisers are expecting thousands of people to make the journey north to Cape York Peninsula’s sacred bora [initiation] grounds at Laura when the ticketed event makes its comeback from 2-4 July.

To give Salvationists the opportunity to take part in this “experience of a lifetime”, the Army’s Aboriginal and Torres Strait Islander (ATSI) Team is coordinating a group to go to the festival.

Christopher Congoo, Territorial Aboriginal and Torres Strait Islander Engagement Coordinator, said people could travel to the festival separately but it was better to travel as a group.

Laura, about 330km north of Cairns and 160km east of Cooktown in Far North Queensland, is the central meeting place for people from the Cape. Organisers said the festival would see the coming together of 20 Cape York communities to present “the finest cultural dancers” and “Australia’s most significant collection of rock art”.

Chris said the plan for the Army contingent was that people wanting to be part of the group would meet and camp at Cairns Corps overnight on Thursday 1 July and leave for Laura around 10am on Friday 2 July.

He said there was limited seating on a bus that would make the journey and that most people should use their own vehicle, advising that the road is easily managed with a standard suburban car. People were also welcome to take caravans or motorhomes to the festival or camp with their own equipment.

He said the ATSI team would conduct morning prayer and devotions each day but then group members would be free to experience festival events at their own discretion: “There is plenty to see and do,” Chris said, adding that the group would leave the bora grounds on Monday 5 July to return to Cairns. 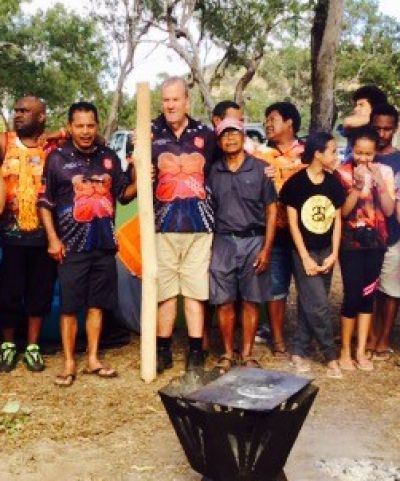 Commissioner James Condon and some of The Salvation Army’s ATSI group at a previous Laura Quinkan Dance Festival.

Along with the Cape York Arts Exhibition, there is to be a festival of music and cultural workshops. At night, there are to be traditional meals and yarning circles and more singing, music and dance performances. As well as the festival schedule during the day, there will be food on sale and various stalls.

The biennial festival began in the early 1980s to showcase the culture of the Aboriginal people of the Cape through song, stories, language and dance. Organisers say it usually attracts “thousands of visitors” from across Australia and overseas, giving the wider community a unique cultural insight.

Retired former Australia Eastern Territory leader, Commissioner James Condon, attended the Laura Dance Festival in 2015 with a group of about 20 from Cairns. He said it was “an amazing life-changing experience” as he “gained a new appreciation for the history of the Aboriginal people and their culture”.

“As well as viewing the dance festival, some of the best times we had was sitting around the campfire enjoying damper and hearing the stories of our people,” he said. “The experience helped me in my role as I sought to resource and empower our people and particularly those serving in Indigenous ministries across the territory at the time,” he said.

Registrations, which need to be made through the official festival website, close on Friday, 21 May.