The Victor Harbor branch of the ANZ Bank in South Australia has launched its 2021 Winter Appeal, which has run annually for more than 12 years to support The Salvation Army. Donations are given to The Salvation Army to distribute to people experiencing homelessness and the vulnerable within the seaside community on the Fleurieu Peninsula, 85km south of Adelaide.

Branch senior personal banker Sharon Hajek said the appeal, which runs from the beginning of June until early September, had become an “institution”, adding that “people are so generous ... we get so much support.” She said donations were placed into a ‘bin’ inside the bank and included quilts, crocheted and knitted rugs, blankets, beanies ... “anything that keeps people warm”.

Captain Nathan Hodges, Victor Harbor Corps Officer, said homelessness was “a big issue” in the town. “The Winter Appeal is a brilliant way to support the community. There are a lot of people in need,” he said.

Branch manager Ray Martin said the bank had “actively promoted two community activities” in conjunction with the Victor Harbor Corps over the past 14 years. Along with the Winter Appeal, the branch holds a Christmas appeal to receive toys and non-perishable goods to be done up in hampers.

The SAES is providing ongoing assistance to residents in Victoria’s south-east following last month’s storms in the area.

In Melbourne’s outer-east, The Salvation Army Emergency Services was at Lilydale this week continuing to provide hot meals to residents without power following the violent storms earlier this month.

Mooroolbark Corps Officer Captain Ashley Proctor was stationed at the Kalorama community relief site in the Dandenong Ranges to help with outreach and assistance while managing the pantry of donated food. The Army also purchased drums of fuel to keep residents’ generators running and provided batteries for torches. In Gippsland, the Army’s bushfire outreach worker assisted residents and helped them apply for government grants.

Salvos worked with shire councils to supply food parcels, with corps officers, members and volunteers spending the weekend onsite assisting residents who had lost everything in their fridges and freezers. Leongatha and Wonthaggi Doorways also provided community support. The Salvos relief response so far includes $30,000 in emergency cash payments, $10,000 in-store vouchers, 7000 meals provided to residents and first responders, and 311 people assisted in the recovery. 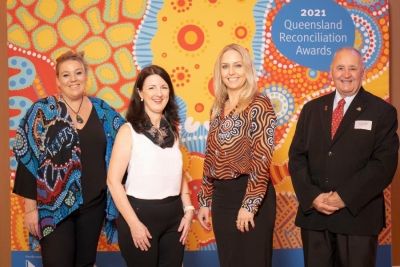 Our Nangara Group in Logan, south of Brisbane, reached the finals of this year’s Queensland Reconciliation Awards, the winners of which were announced at a ceremony in Townsville on 1 June.

Uncle Barry Watson, Elder in Residence for The Salvation Army Communities for Children Logan, is a group member. Uncle Barry said the group was nominated in the ‘education’ category for having developed a program to help early childhood educators and teachers include Indigenous perspectives in their curriculum. “I felt very proud of our team to be nominated and make the finals,” Uncle Barry said. “We all agree that our efforts and hard work are for the benefit of our children.”

Uncle Barry said the group, formed about five years ago, meets monthly and aims to embed Aboriginal and Torres Strait Islander cultures into the community through planned activities and gatherings. The group’s largest community event is held during NAIDOC Week. Uncle Barry said 435 children had so far enrolled to be part of the group’s NAIDOC week Under 8s day to be held at Daisy Hill State School on 15 July, where there will be performances by Aboriginal and Torres Strait Islander dance groups, traditional face painting, nature craft activities, the Dreamtime Show and weaving demonstrations. 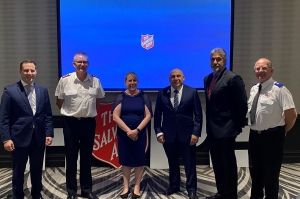 Students played Kahoot [a game-based learning platform] and were quizzed on their knowledge of The Salvation Army. “They also heard from Erin McCready, ‘local legend’ from Rouse Hill Corps, about how she is involved in the Salvos and how they have helped her on her journey,” Susanne said. “Some exciting results have already come from this event, with participants interested in bringing fundraising ideas back to their schools and individuals signing up to volunteer.”

Captain Joel Clifford on his paddling adventure in south-east Tasmania, backed by his support crew.

Overcoming systemic poverty is a journey – just ask Captain Joel Clifford, Corps Officer at Clarence City Salvos in Tasmania. Last week he paddle-boarded 6km from Lauderdale to Seven Mile Beach, all in the name of raising funds for the Red Shield Appeal.

This is the second time Joel has braved the icy waters of Tasmania’s south-east for the Red Shield Appeal. Last year he went swimming in the Derwent River to raise money for the appeal. This year he has so far raised over $700 for the Clarence City Salvos mission work.

“I wanted to try and find something creative to do to encourage people to donate to the Red Shield Appeal. I thought that maybe if I challenged myself to something, then people might donate in order to support those in our community that face huge challenges every day,” he said. “The generosity of those who donated and those who came for a paddle with me will make a real difference in the lives of those who live with challenge daily.” 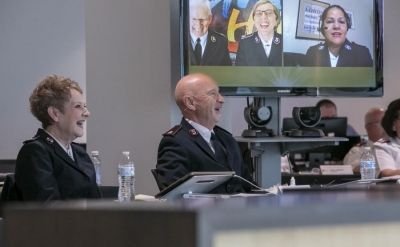 The congress theme was ‘Indescribable Faith, Confident Hope’ and was aimed at celebrating mission advancement and to spur on Salvationists in America’s Midwest after more than a year of sacrifice and creativity during the COVID-19 pandemic.

More than 1300 registered delegates attended the live-streamed congress, which was a hybrid of pre-recorded and live elements viewed. The weekend included a soldier-moderated question-and-answer session with General Peddle and Commissioner Peddle, tackling challenging inquiries on subjects such as sexism, LGBTQ+, racism and social justice.

A virtual prayer room, held in English and Spanish, was run by 30 officer and soldier counsellors. As part of the weekend, the Messengers of Grace session of cadets were ordained and commissioned as Army officers and discovered their appointments with the help of Google Earth on a jumbo screen.