Salvos SleepOut a wake-up call for homelessness in Tasmania Salvos SleepOut a wake-up call for homelessness in Tasmania

The Tasmanian Salvos SleepOut is an immersive experience, and this year people in Hobart, Kingston and Glenorchy were also given a tour of local homelessness services. Pictured here, Acting Homelessness State Manage and Street2Home Team Leader Don McCrae guides participants around the streets of Hobart.

It’s hard yakka sleeping on the streets of Tasmania, but this year’s Salvos SleepOut proved it could become a memory after $94,000 was raised for The Salvation Army Street2Home program. 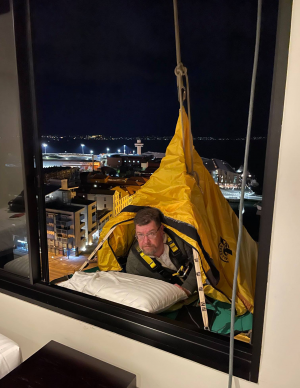 Participants at the 2021 Salvos SleepOut in Tasmania embraced the reality of sleeping rough – but Ralph Freckleton, General Manager at the Hotel Grand Chancellor in Hobart, took it to new levels and slept suspended from the building!

“We’ve been somewhat astounded by the results of this year’s Salvos SleepOut,” said Major Brad Watson, Public Relations Secretary for Tasmania. “We make it as much of an experience and education piece as possible, so people are literally out on streets where the wind comes off the water and are mixing with people who are experiencing homelessness.”

On Thursday, 84 locals participated in the 13th Salvos SleepOut, which invites Tasmanians to experience a night on the streets to raise funds for The Salvation Army.

In Hobart, staff, MPs and sponsors slept in the courtyard of the Grand Chancellor Hotel, and two even slept on platforms suspended from the building. Two satellites also enabled community members in Kingston and Glenorchy to participate at the Kingston Beach Surf Life Saving Club and Glenorchy City Council, respectively, and a youth group in New Norfolk participated outside the Derwent Valley Corps.

In addition to sleeping rough, each Salvos SleepOut site was given a tour of local homelessness services. In Hobart, participants learned about the connection between Salvation Army Housing, Campbell Street and other programs, visited the Salvos street teams at Salamanca, and learned how medical, food and support services are provided in places like the Elizabeth Street Mall. Later, a panel consisting of Housing Minister Michael Ferguson, the Salvos’ Acting National General Manager of Homelessness Services, Dr Jed Donoghue, and two former Street2Home clients kept lived experiences at the forefront of the conversation.

Participants in Glenorchy slept out on the council lawn, allowing the local homeless community to share their stories with MPs and Mayor Bec Thomas. All up, 12 people stayed the night, raising more than $11,000 for the Street2Home program. Corps Officer Captain Jeff Milkins said the event is expanding every year. 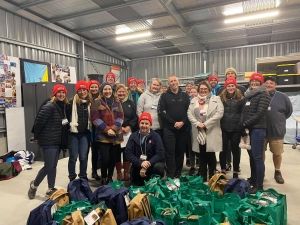 Captain Steven Haworth (centre front) and participants in Kingston joined the Salvos SleepOut by satellite. They are pictured here with hampers they packed for the local homeless community.

“One of our aldermen who is a first-time sleeper raised $4000 – and the Governor-General of Tasmania, Barbara Baker, donated 110kg of food to stock our fridge and freezers,” said Jeff. “The Salvos SleepOut is a chance for some of our local guys who are homeless in the centre of town to access these politicians and to tell their stories. That’s the area we are expanding to.”

The success of this year’s Salvos SleepOut means the Street2Home service can expand. Currently, the assertive outreach service reaches people on the streets and in parks. Additional funding will increase their reach in Hobart, Burnie and Launceston. And come next year’s SleepOut, they plan to set up a third satellite so people in the state’s north can participate.

If that wasn’t enough to give you hope, the fact six MPs and the Governor of Tasmania showed up should. The tide is turning on homelessness in Tasmania – one life and one SleepOut at a time.