The theme of the first-time virtual event was "On Earth as it is in Heaven". It was moderated by the Army's International Social Justice Commission (ISJC) director, Colonel Richard Munn.

One hundred Salvationist delegates from 45 Territories gathered virtually for the week to learn and discuss the most pressing current and future moral, social and ethical issues the Army has yet discussed, including artificial intelligence, corruption, gender, human trafficking, and nationalism.

In his address to open the IMASIC symposium, the Army's world leader, General Brian Peddle, said it was important to meet in such a way to discuss moral and social issues and to have the Gospel at the centre of engagement with those issues.

"In the complex and multifaceted world we live in today ... The Salvation Army needs to gather its best thinking minds to guide our denomination through the issues of the day," the General said.

Richard hosted the symposium from the ISJC offices in New York with the event having started daily at noon London time. Many of the delegates either joined early in the morning (4am in California) or late at night (11pm in New Zealand).

MASIC exists to identify, study, advise on and respond to moral and social issues about which the Army believes it has a responsibility to form a view. 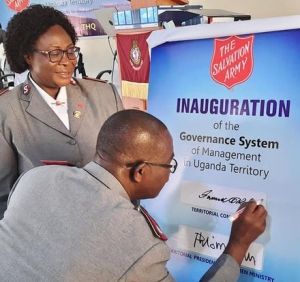 The Salvation Army Uganda Territory has launched an upgraded version of its Governance System of Management.

Territorial Commander Colonel Samuel Kwao Oklah said the new system was designed to be more inclusive and liberal to ensure all sections – such as youth, women, local officers and friends of the Army – were represented in the "top administrative structure", the Governance Board.

Samuel said that, in the new system, the Territorial Governance Board would have a supervisory and policy-making role, while the Territorial Management Board, chaired by Chief Secretary Colonel Chatonda Theu, would be responsible for the implementation of the process.

Also in Uganda, on the eve of The Salvation Army's World Day of Prayer for Victims of Human Trafficking, Samuel launched the second phase of its national Anti-Human Trafficking Project at Kampala Corps in the nation's capital. 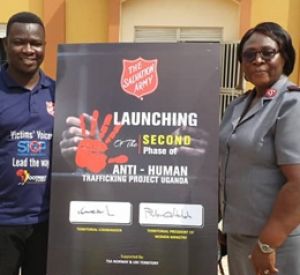 Project manager Emmanuel Wataka said the two-year project, made possible through funding from the Norway and United Kingdom and Ireland territories, would be implemented in Lwakhakha, Busia, Mbale and Tororo, focusing on the creation of awareness.

Emmanuel said the Territory had run a pilot to the project over the past 12 months and its success led to the launch of phase two.

Samuel said that, to achieve the aims of the project and reduce the human trafficking in Uganda, "we have to work on behavioural change and building resilience in community people".

The Salvation Army in the United States has received a $US10 million ($A13.8million) grant from Lilly Endowment to support ongoing emergency response and long-term recovery for those affected by August's Hurricane Ida – from Louisiana to New England – and by recent wildfires across 10 western states.

The National Commander of the Army in the US, Commissioner Kenneth Hodder, said that thousands of people had lost their homes and livelihoods in the hurricane and fires and the donation would help the Army get them back into their homes and find stability.

"I have seen the impacts of recent hurricanes and wildfires firsthand, which has shown without any doubt that needs will continue long after initial responses are over," Kenneth said.

Lilly Endowment is a private philanthropic foundation that supports religion, education and community development across the US.

It’s vice president for community development, Ronni Kloth, said the organisation was pleased to continue its long history of supporting the Army’s disaster relief efforts and helping people in need, including during the COVID-19 pandemic.

Last year, Lilly Endowment gave $US15million ($A20m) in grants to the Army for its for COVID-19 relief efforts.

Excitement over handbook in native language Happy Ukrainian Salvationists with copies of Called to be a Soldier – Exploring the Soldier’s Covenant, printed in their own language.

It was a momentous and exciting occasion when The Salvation Army Eastern Europe Territory Ukraine Division received hard copies of the Called to be a Soldier – Exploring the Soldier’s Covenant handbook, and companion Day by Day – Call to Mission, printed in their native language.

It was a similar scene in the Burundi District of the Rwanda and Burundi Command when Officer Commanding Lieutenant-Colonel Jean Laurore Clenat and General Secretary Major Emmanuel Ndagijimana visited and handed to each soldier a copy of the same books – 60 copies of each in all – which had been locally translated.

Command Projects Officer, Francois Nsengimana, said the leaders went to the district especially for "a spiritual visit" to hand over of the books. The soldiers in the Burundi District of the Rwanda and Burundi Command with their copies of Chosen to be a Soldier and Day by Day.

"The recipients were overwhelmed with joy for having been given such rich resources as they continue journeying with Christ in their soldiership covenant," Francois said.

Army world leader, General Brian Peddle, has said the books, which he launched in July this year, were available to every senior soldier.

The General said the books were "important resources" for Salvationists to help them realise soldiership was a calling and to understand the connection between discipleship and mission.

Called to be a Soldier is regarded as an updated version of what was known as the Orders and Regulations for Soldiers. Through the technology of video conferencing, Rosalie conducted the interview from International Headquarters in London with Priscilla in Los Angeles and Malaika was in the Netherlands.

The theme for the prayer day was Beyond the Dark, which was inspired by 1 Peter 2:9-10.

The interview is the first of a new series of discussions between Rosalie and some of the "influential voices" within The Salvation Army’s global network, centred around the question 'What is on your heart?’

The International Day of Prayer for Victims of Human Trafficking is marked on the fourth Sunday in September to provide an important focal point for prayer to support people caught up in trafficking and those working with survivors.

The 13-minute interview can be seen on the SalvArmyWomen Facebook page at https://www.facebook.com/SalvArmyWomen.

Order of Founder for morals campaigner 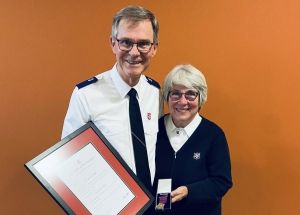 Dr James Read and his wife, Laurie, with the Order of the Founder certificate and medal.

Retiring chair of The Salvation Army International Moral and Social Issues Council (IMASIC), Dr James Read, has been presented with the Army’s highest honour, the Order of the Founder.

It was presented to James, on behalf of Army’s world leader General Brian Peddle, by Canada and Bermuda Territorial Commander, Commissioner Floyd Tidd, in a ceremony at the College for Officer Training in Winnipeg, Canada.

Dr Read most recently was Executive Director of the Army's Ethics Centre, which he founded in 1994.

Among his achievements have been helping to establish the Catherine Booth Bible College (now Booth University College) in Canada in 1982 and, in 2008, became a senior policy analyst for the newly formed International Social Justice Commission (ISJC). He is active at his home corps, Heritage Park Temple, in Winnipeg, together with his wife, Laurie.

The Order of the Founder was instituted by General Bramwell Booth in 1917 to mark "outstanding service rendered by officers and soldiers such as would, in spirit or achievement, have been specially commended by the Founder".