One of London’s tallest buildings, the 183m Tower 42 (or NatWest Tower) last week displayed The Salvation Army red shield to help raise awareness of modern slavery in the United Kingdom.

A neon image of the shield was displayed between 18 October (International Anti-Slavery Day) and 20 October as part of the Army’s latest campaign in the United Kingdom and Ireland Territory to help the community spot the signs of slavery.

Major Kathy Betteridge, the territory’s Director of Anti Trafficking and Modern Slavery, described the issue as “a scourge on society” and hoped passers-by would be prompted to ask why the shield is on the tower and learn more.

“The public has an important role to play in spotting the signs of people trapped in slave-like conditions across our cities, towns and villages and reporting their suspicions,” she said. “They [slavery victims] come to us fearful and traumatised with nowhere else to turn for help. We can all help fight modern slavery by raising the alarm if we are worried that something is wrong.”

Army has 'stranglehold' on wrestling fundraiser 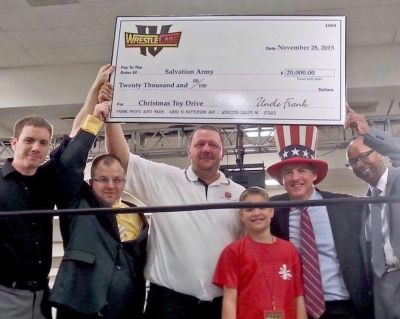 Big cheque ... The Salvation Army's Stephen Wilson (centre) accepts a cheque for $US20,000 from the Westlecade team, including franchise owner Tracy Myers (with hat), after a previous event.

Professional wrestling is not something The Salvation Army usually steps into the ring with, but the Greater Winsome-Salem Corps in North Carolina (USA) has a stranglehold on the sport.

For more than 10 years, the city has hosted WrestleCade – a three-day professional wrestling event – that has the Army as its sole beneficiary of proceeds. The event was not held last year due to COVID-19 restrictions, but it is planned to be held from 26-28 November this year.

Tracy Myers, WrestleCade Managing Director and founder, said the event had raised “tens of thousands of dollars” for the Army since it began as a one-day pro-wrestling event. When WrestleCade began nine years ago, 30 wrestlers took part. This year 100 have signed up, making it the largest and most diverse yet run, with more than 7000 people expected to attend over the three days, making it one of the biggest wrestling conventions in the world.

Bob Campbell, the Army’s Director of Marketing and Public Relations for Greater Winston-Salem Area Command, said: “Wrestlecade has been a fantastic, fun event for the whole family for years, and their support of the families served by The Salvation Army cannot be underestimated.”

The Singapore Territory’s Peacehaven nursing home has become the first in Singapore to achieve international accreditation from the Australian Council on Healthcare Standards (ACHS) through its International Accreditation Program based on the Quality Improvement Program (EQuIP) Residential Care Standards.

EQuIP is a quality assessment and improvement program designed to assist and support healthcare organisations to ensure safe and high-quality patient care and services and achieve continuous quality improvement.

Peacehaven Executive Director Low Mui Lang said the Army was looking forward to working with ACHS International and “connecting with the global family of accredited organisations on our journey of ensuring safety and quality improvement for those we serve”.