Melbourne turned into a ghost town during lockdowns, but that is changing with a weekly busker festival, thanks to a collaboration between Scots' Church and The Salvation Army’s Project 614. Named 'Loving the City to Life', buskers are to perform outside Project 614 on Bourke Street each Wednesday from 12-2pm. The next day, Scots’ Church on Collins Street will host more performers.

Volunteers are to be on hand to give out free cups of coffee – ensuring Melburnians can enjoy their two great loves simultaneously. The busker festival is to run twice a week until Christmas and is only the start of the churches' 'Loving the City to Life' initiative.

Corps officer Major Brendan Nottle said the decision to share some music and happiness with passers-by was an easy one. "We know the power of music," Brendan said, "and Melbourne has had a rough two years. So when the opportunity came up for buskers to set up outside 614 on Wednesday afternoons, and outside Scots' Church on Thursday afternoons, we all saw the value.

"We know that music is one of the greatest gifts God gives us, and the smiles on people's faces tell us that it is appreciated." 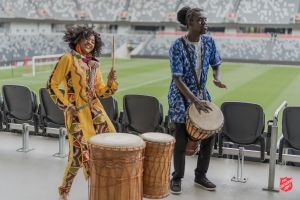 In the true spirit of celebration, The Salvation Army acknowledged the work of community members to enhance social cohesion across the multicultural communities of Western Sydney. The award winners announced on the night were House of Welcome, Dr Olayide Ogunsiji, Peter Htoo, and the Community Refugee Welcome Centre.

"The resounding message that was reinforced throughout the evening was that the Salvos is a place of welcome and belonging for multicultural communities everywhere and our firm belief is that we are all created in God's image!" said Adrian Kistan, National General Manager for Diversity and Inclusion in The Salvation Army.

"We are believing that from this event and the ongoing Multicultural Ambassador Campaign, there will be greater collaboration and partnerships with local Salvo expressions and their multicultural communities so that we can transform Australia one life at a time with the love of Jesus."

The Salvation Army Strategic Emergency and Disaster Management team was called in overnight by the Queensland Government to be part of a recovery effort as this week’s floodwaters recede in towns near the Queensland and New South Wales border.

Army National Recovery Specialist Sue Hopper said that, while SAES catering response vehicles were not yet required, SEDM would provide financial and practical assistance to people affected by the floods over coming days, initially at Inglewood, at a Government-coordinated Community Recovery Centre to open tomorrow.

Persistent record November rainfall over several days caused several waterways in the region to break their banks, non moreso that at Inglewood where Sue said 30 homes were inundated.

Residents fled their homes mid-week as water washed through the town. The ripple effect is being felt in other areas, such as at Yelarbon and Goondiwindi, as floodwaters flowed downstream.

Goondiwindi continues to brace for its highest flood peak yet recorded at 10.7m.

SAES Queensland coordinator, Adam Cole, said there were a number of areas being monitored across southern Queensland, with Chinchilla on the Western Downs having a "watch and act" message in place for moderate flooding over the next few days.

Sue said the situation continued to be "dynamic and changing" and, with the storms at the weekend and a further rain event in the affected areas forecast for next week, SEDM and the SAES would continue to be ready to respond as needed.

Christmas a challenge at Calamvale Alex Satina, left, and Major Di Gluyas from Calamvale in Brisbane, with some of Alex's artwork for the Corps' Christmas Challenge.In the lead-up to Christmas this year, The Salvation Army Calamvale Corps, on Brisbane’s southside, aims to "bring change to a random person every day" as part of a new take on the Advent calendar.

Corps Officer Di Gluyas said that, instead of someone opening a box or flipping open a little door to get a treat, through a social media page campaign during December, the corps was to encourage corpsfolk and the wider community to "bring hope and life to a complete stranger" by taking on a daily challenge.

Titled 24/12 – OTHERS, Di said that each day from 1 December to Christmas Eve, a new challenge would be posted, along with specific artwork, which was designed to "bring complete, unexpected hope and life to others".

She said people would be invited to pass the challenges on to others, too, to encourage them to be part of the initiative.

"Together, let’s start to change lives and the world: one day, one challenge, one life, one huge difference," Di said.

"At the end of the 24 days on the 12th month of the year, you will have brought change in your community and you will be a different person as well," she said.

The graphics for the campaign are the creation of Alex Satina, who has been a member of the corps for several years.

Di said Alex was "very creative", loved to work through social media and "had a heart to promote The Salvation Army as much as possible".

The campaign kicked off yesterday (subs: Dec 1) with the first challenge: to smile at as many people as possible during the day. Today, the challenge was to buy a coffee or a cold drink for a stranger and, tomorrow to "put it back" such as returning a shopping trolley – or someone else’s – to the trolley bay instead of leaving it between the cars or take your coffee cups and crockery back to the counter so someone else does not need to clean up after you.

Di said the final challenge – on Day 24 – would be to invite friends to attend a Christmas Eve or Christmas Day service "to hear the message of what Christmas is all about – the true gift of hope".

To follow the Calamvale corps posts on Facebook, go to @Salvoscalamvale. When posting about challenges, use #24/12-OTHERS.

Door to door in Laverton 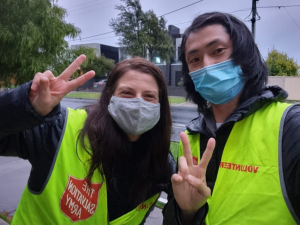 (L-R) Natalie Rotin and Luke Moon from Hobsons Bay Corps working as part of the hot meal delivery team.The Salvos' Friday night barbecue was a lifeline for people in Laverton, so when it shut down due to restrictions last year, the team at Hobsons Bay Salvation Army took the food door to door.

For the last decade, Hobsons Bay Corps has done outreach in Laverton to connect with locals struggling with mental health issues, addiction and isolation. On the suggestion of Outreach Team Leader Steve, a growing group of volunteers began cooking, driving and delivering fresh food to the most vulnerable community members. The ministry has since evolved, and every week they now deliver 100 meals to 50 people, forming deeper relationships between residents and volunteers.

"It’s not just the meals that the community looks forward to. It is a friendly face and socially distanced chat at the door for people who haven’t seen anyone else all week. It is a prayer and a laugh, and even referrals to other help," said Corps Officer, Lieutenant Star Conliffe. "The food is almost an afterthought, because our volunteers have real friendships with the people at the door. And I believe that is what makes us different – the community trusts us because we do it all with the love of Jesus." 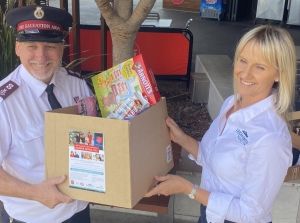 Gold Coast Temple Corps Officer, Major Steve Dorman, receives from Sarah Leigh-Smith the first of many hampers to be donated by Leigh-Smith Yachts to The Salvation Army's Christmas Appeal on the tourist strip this year.For hundreds of "Gold Coasters" doing it tough, Christmas will be smoother sailing this year because of a donation from luxury boat business, Leigh-Smith Yachts.

For the past three years, the company has been collecting specific items in the lead-up to Christmas to put into hampers which it donates to The Salvation Army to hand out to the vulnerable in the community.

The business’s Sarah Leigh-Smith said, at the launch of the Army's Christmas Appeal on the Gold Coast, that "a team of people" would gather on 9 December to organise the items into the hampers "so The Salvation Army didn’t need to do it, saving them many man-hours".

Sarah said Lee’s IGA at Sanctuary Cove provided the boxes each year into which the hamper items were placed. When the business first began the initiative, 40 boxes were donated to the Army. Last year, it was 250 and this year more than 320.

The Gold Coast Community Fund donated 400 $30 gift cards, many of which are to be put into the Leigh-Smith Yachts hampers.

The fund's Karen Phillips said the fund did not have the resources to distribute the cards where they were most needed so collaborating with the Army with its support network and programs enabled that which was "really wonderful".

Gold Coast Temple Corps Officer, Major Steve Dorman, said the Army was expecting "a new peak" as the community faced a second Christmas struggling with the social and economic burden of the protocls put in place to combat the COVID-19 pandemic.

"Christmas is the busiest time of the year for the Salvos on the Gold Coast. While it's a time of joy and celebration for many, others doing it tough find it an extremely difficult period for them personally," Steve said.

"The increased isolation, financial stress and mental health impacts of COVID-19 this year will only exacerbate these issues. The Salvos want to leave no one in need this Christmas and we need the generosity of the public to once again partner with us in support of Gold Coasters in need,” he said.

The Army hopes to raise $3 million as part of its Christmas Appeal this year.

Fete welcomes in community at Floreat

The Silver Threads Band delighted the community with their performances during the Floreat Corps Community Fete. After a one-year hiatus, locals streamed to the Floreat Corps Community Fete for a day of fun, community and fellowship. The corps in suburban Perth has held the event for more than 40 years, and 2021 did not disappoint – a bouncing castle, animal farm, fresh food market and the Silver Threads Band made it a special day for all ages.

The combined effort of the corps made the event possible, with the 55 Plus group sourcing donations for a silent auction. Meanwhile, funds raised from the event went towards The Salvation Army's "Making It Happen" project and the corps' community work.

"Some of our corps folk are now unable to help in the same way due to age or ill health, but it was lovely to see them attending and sitting in the café talking to those who enjoyed morning tea or lunch.  These corps folk were sharing the love of Jesus to those who came to our fete," said fete organiser Major Jennifer Armstrong.

The year 2021 marked a milestone for Floreat Corps, their 125th anniversary in August. The return of the fete was the icing on the cake for the community – with Captain Melissa Templeman Twells even being approached about it while in line at the supermarket. What a great way to show the love of Jesus!