Nicki Troyanova, one of several villagers to be given firewood by The Salvation Army in Bulgaria as part of a ministry to vulnerable families to provide fuel for their fires and fuel their spirits with the warmth of the gospel. 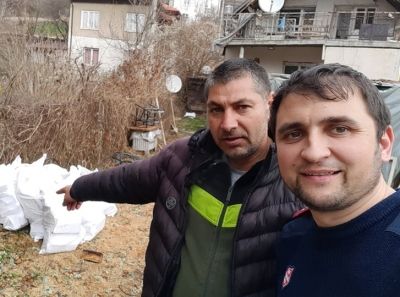 The Salvation Army Bulgaria Regional Leader, Captain Eduard Lebedev, with a resident of Tran and a welcome delivery of firewood.

Leaders and volunteers from The Salvation Army in Bulgaria have been delivering warmth to people in and around the capital, Sofia – not only with firewood but also with the gospel message.

As part of the initiative, Regional Leader Captain Eduard Lebedev, Captain Kathleen Johansson, Lieutenant Erik Johansson, and volunteers Borislav and Albena took two large vans to deliver 170 sacks of firewood to 17 families in the small village of Tran, which is in Pernik Province, near the Serbian border – a 150km round trip from Sofia.

“Since in small towns many people use wood for heating, this help turned out to be in the right place at the right time,” Eduard said. “We had the opportunity to share the gospel, donate Christian literature and pray with people.”

Kathleen said the firewood would last the families about 4-6 weeks. Each year, the Eastern Europe Territory distributes funds around its divisions and regions as part of its Winter Relief initiative to be used to help vulnerable families and children. “We decided to split the money into three smaller projects,” Kathleen said.

Along with the firewood delivery in Tran, the Army in Bulgaria provided shoes for children at a temporary relief shelter and gave out new blankets to 50 children and their families. 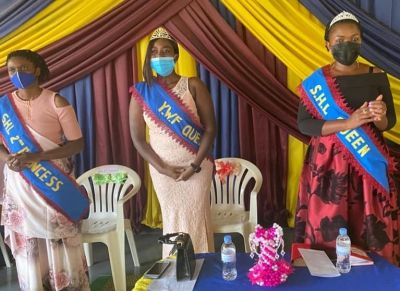 As part of its annual Helping Hand Appeal each year, The Salvation Army Rwanda and Burundi Command holds a special coronation to recognise women who have made a significant contribution to the appeal.

The women, part of the senior and junior home league ministries in the command that took part, are crowned queens or princesses.

The crowns are bestowed to the women who raise the most money for the appeal in their home league stream, with the Queen and Princess being the winner and runner-up in the SHL. JHL is for people aged seven to 30 years of age, and SHL is for those aged 31 and over.

Development Officer Francois Nsengimana said the appeal, run by the Women’s Ministries Department, was not limited to Home League women, with people outside the Army supporting the appeal and men also taking part and crowned as kings.

General Secretary Major Emmanuel Ndagijimana said that, along with raising much-needed funds to support the work of the Army, Helping Hand encouraged donors to look beyond their local boundaries and domestic needs to those of others around the world.

“Funds raised from this appeal, like previous years, are used to visit children with disabilities to bring smiles and joy into their faces after being discriminated, to visit hospitals including psychiatric for unattended patients, the homeless people and many others,” Emmanuel said.

Corps and Sections (Districts/Divisions) were also recognised for their fundraising with Kigali Central Corps, and Kigali Section presented with certificates. The eager shoppers were treated to doughnuts and coffee as they waited in the queue.

Dalita Lovett, Director of Resource Development in the USA Western Territory Adult Rehabilitation Centres Command, said the store opening was part of “a larger story”. She said the funds generated from the new store would provide resources for the Army’s San Diego Adult Rehabilitation Centre (ARC), which opened in a new location in Otay Mesa near the Mexican border in June last year, after having moved from its downtown San Diego location where it had been for more than 40 years.

She said the state-of-the-art facility, which cared for people experiencing addiction, was “the newest, flagship ARC in the United States”.

The 3m character takes about 20 minutes to inflate. A small generator at the base keeps the character inflated while in use: “We don’t have a nickname. We just refer to him as ‘the inflatable officer’, but he sure is an eye-catching fellow,” Dalita said.

“We’ve patched him over the years with bicycle tyre patches where small holes have opened from wear and tear. He is [used] for the many outdoor events we do in Southern California and really draws in supporters, many taking the opportunity to grab a photo with him.

“We do share this bundle of joy with our divisional counterparts, who use him for Red Kettle kickoffs and other prominent public events around town. It is visible from afar and is a huge crowd pleaser.”

Majors Charles and Shari Fowler, the General Secretary and Secretary for Program of the ARC Command in the Western Territory cut the ribbon to open the new store. The Territorial Commanders, Commissioners Douglas and Colleen Riley, were there along with Chief Secretary, Colonels Kelly and Donna Igleheart, ARC Commanders, Majors Henry and Dina Graciani, General Secretary and Program Secretary, Major Charles and Shari Fowler, and San Diego ARC administrators, Captains Paul and Jennifer Swain. 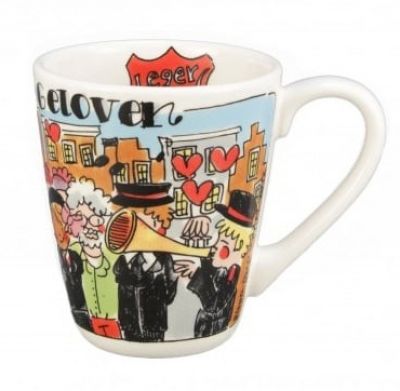 Mug’s game: a photograph of a mug The Salvation Army in the Netherlands produced to celebrate 125 years of the movement’s presence in the country.

Soelaas, The Salvation Army magazine in the Netherlands, is scouring the country looking for antique, original or fun mugs and cups to be part of a feature in an upcoming issue of the publication – not the actual vessels but photographs of them. The cups or mugs must have some Army design on them or have been produced by the Army.

Soelaas editor-in-chief, Willemijn de Jong, said The Salvation Army (Leger des Heils in Dutch) had produced many commemorative mugs over the 135 years of the movement’s presence in the Netherlands.

“Our call only applies to Dutch mugs. All kinds of mugs and cups have been made by and for The Salvation Army in the Netherlands, for all kinds of reasons,” Willemijn said. “We want to make an overview of these mugs, just like we published a collection of Army money boxes last year.”

The magazine has put the call out for readers to send in photographs of their mugs or cups, which will be used in a feature planned for the May issue. “We are sure that there are people who have an antique, original or very funny mug at home,” Willemijn said.

Soelaas is published quarterly as a hardcopy magazine and includes stories from people from within the organisation, from interviews to reports and columns by Dutch celebrities. Willemijn said some of the content was published online.

“Soelaas is our variant of the War Cry magazine. The title means something like ‘Solace and Salvation’,” Willemijn said.

The magazine has been in circulation for over 12 months, with the first issue being published on 21 January 2021.