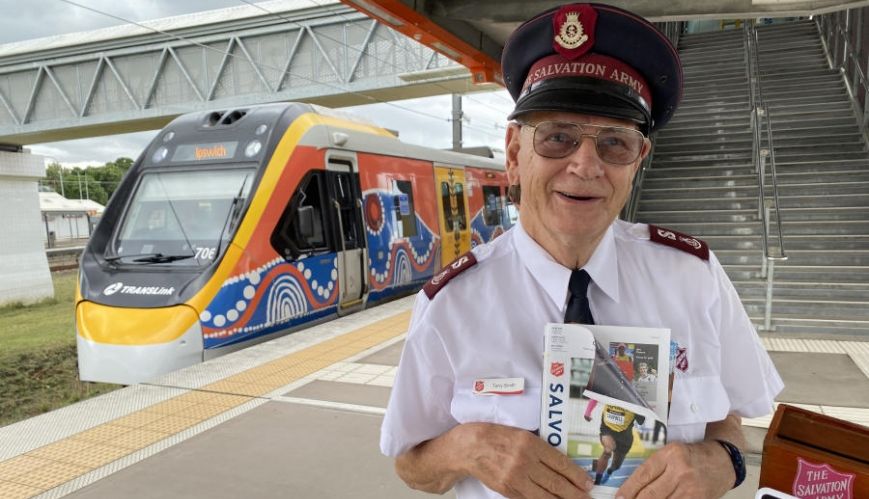 Major Terry Smith ... on platform five at Petrie railway station where he collects donations and greets commuters most Fridays.

Major Terry Smith has a broad, infectious smile, and nothing brings that smile to his face more than greeting commuters on Friday mornings at Petrie railway station, north of Brisbane – except his daughters and grandchildren.

Terry retired as an officer in The Salvation Army more than 20 years ago but has not put his maroon epaulettes and cap away.

After his last active appointment at Narrabri in northern NSW, Terry and his family moved to Brisbane to retire. They settled in “a nice two-storey house at Petrie” – within easy walking distance to the railway station.

“Once I retired, I had time on my hands, and I was looking around to see what I could do,” Terry said.

The first opportunity was a three-month role driving “a group of American evangelists” around Australia. They followed the 2000 Sydney Olympic Games torch relay and led outreach activities in each town visited.

“We travelled 10,000 miles and gave out 10,000 gospels,” Terry said. “The Army, wherever it was, give us a bed for the night and a meal before we set off again in the morning. I was a volunteer at the Olympic Games, too. I had to do eight hours a day for 10 days. When that finished, I went looking for something else.”

The then Pine Rivers Shire Council introduced a program for senior citizens where volunteer drivers would pick them up for appointments or go shopping and return them home. Terry said he did that three days a week for 10 years.

Around the same time as he began with the council, he started his platform ministry: “I went on Wednesday mornings from 6am to 8am at the Strathpine station and then, on Friday, I would do the Petrie station 6am to 8am – that's most Fridays from 2001 ... until today,” Terry said.

“I understand the Army needs money, but I take it as a mission in greeting the people and saying ‘Good morning. Have a good day’. I don’t ask for donations. I let the uniform ask that question.”

Terry said he had seen a number of commuters grow from school students in their uniforms to beginning their careers to even “pairing up”.

He said he labelled Strathpine “Cupid Station” as he’d see many students meet on the station with plenty of cuddling and holding hands as they boarded the train.

He said many of the younger students would take, back then, a Young Soldier magazine or, today, a Kidzone.”

Terry retired last year as a Red Shield Appeal area coordinator and from his regular visits to high schools to address students and call for doorknock volunteers.

“Many of the students, now grown up, come up to me on the station and say they remember me coming to the school at Red Shield Appeal time,” he said.

Then there’s his 20-year hotel ministry – going armed with Warcry/Salvos magazines, a collection box and his joke of the week “to put a smile on the faces of patrons” – and having visited Woodford Correctional Facility most Thursdays for 16 years and doing Sunday services on a roster.

While Terry has seen Petrie station develop into a state-of-the-art rail hub, it was more difficult to get technological advances to his platform ministry. He said it took some persuading, but the Army eventually provided him with a $5 ‘tap and go’ machine a few years ago.

One of the highlights has been his relationship with station staff, particularly the Station Master, who has been at the facility for as long as Terry. His name: Terry Smith! Major Terry cherishes the invitation to make a cuppa in the station office “any time”.

Terry turns 82 this year and has no plans to give away his ministries.

“While I’ve got the strength and the Lord gives me the strength, I’m happy to continue. I enjoy meeting people and seeing a smile on their faces. They look forward to seeing me, too. I know that because when I’ve not been there for one reason or another, they ask: Terry, where have you been?”