Dell has been a Salvation Army Family Store volunteer for 30 years. She says she loves volunteering with a close-knit team, which is just as well because she spends most of her week knitting for the Salvos.

Most of her three decades as a volunteer has been at the Broken Hill Family Store, “ ... except for four years when I was in Wagga, but I still knitted eight hours a day for the shop.” 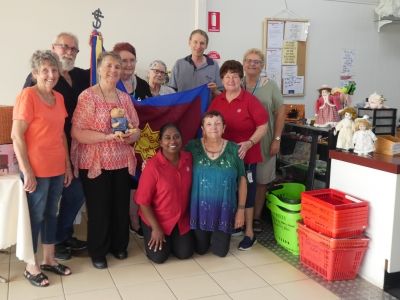 Dell (holding the doll) and the “close-knit” team at Broken Hill Family Store.

Dell makes 14 dresses a week, sewing six days a week using donated dress patterns, fabric, lace and buttons. She only needs to buy the bias and Velcro. Aside from dresses destined for dolls donated to the store or to dress up a child’s favourite doll (some have ended up as far away as South Africa!), Dell also knits baby clothes for premature babies, sending Ronald McDonald House a hundred pieces at a time.

Tuesday is Dell’s day in the store, and “that’s why I don’t sew seven days a week! I’d go mental if I didn’t have it, really I would – sitting at home doing nothing all day is just not me.”

Dell believes the Broken Hill team sticks together because “we’re all mad!”, but really “we are good friends and have loads of fun”. She cites one example of a customer who suffers from depression, who especially comes in on Tuesdays and says she doesn’t need her medication on that day because the Tuesday volunteer team really help her connect and have fun.

Dell says she was experiencing a “significant time” in her life when she decided to start volunteering. “A lady I knew said come and volunteer at the Salvos”. And so she did, and she has been there ever since.

When asked to describe her volunteering experience in one word, Dell gently answers, “lifesaving”. Soon the other volunteers chime in with their one word – “friendship” says one; “togetherness” says another; Grant, who has delighted the team with dress-ups in donated costumes of Superman and Chewbacca, says “entertaining”. With many having volunteered for decades, they say the team’s stability is due to being consistent, feeling valued and appreciated. They are “all there for each other”, says Grant.

Dawn has been the store’s manager, in a volunteer capacity, since 1980. “Being a volunteer manager makes it work better – we are all the same, we are all equal,” she says. Grant describes her as “... a rock, treats everyone like family”.

Dawn believes her friendly team demonstrates Christianity at work and values every visitor to the store. “If we can’t get them to church, we can get them to come here,” she quips. “[But] the most rewarding part of volunteering is the fellowship, meaningful chats, and being a part of this big family.”