As the floods subside, the Salvos rise 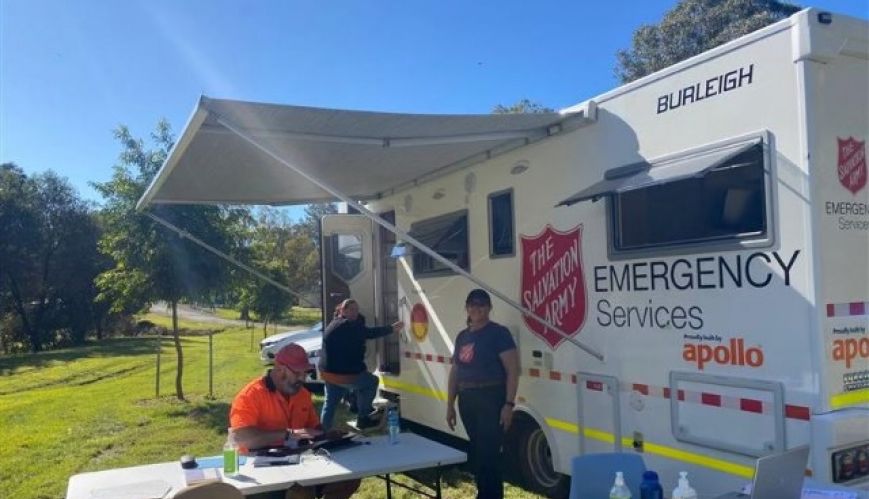 As the floods subside, the Salvos rise

The team working from The Salvation Army Emergency Services (SAES) Winnebago distributing relief for people affected by the recent floods.

“The reality is that people impacted by the recent floods in Northern NSW will be forgotten as the news cycle moves on,” said Captain Philip Sutcliffe, Northern Rivers Corps Officer.

The Salvos are doing their best to ensure they aren’t forgotten and getting help recovering from the devastating events.

The Northern Rivers and Tweed Heads corps are heavily involved in reaching out to those affected, listening to their stories, providing physical needs and being present in the various communities to follow up and refer to available help.

“For me, I can try to understand and feel for them and discuss their options,” said Aleasha Yaxley, Ministry Assistant/Community Engagement Worker at Tweed Heads Corps. “I just be compassionate, check we have ticked all the boxes to make sure they have all the available supports and feel connected, especially if they are on their own.” 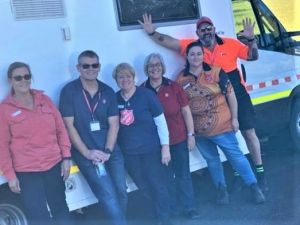 Many families affected by the Lismore floods now live in motel rooms near Coolangatta and Tweed Heads. They can’t cook in their rooms, they are away from their community supports, they have lost cars, and funds aren’t meeting their needs, so they come to the Salvos to get food and clothing and chat about their circumstances.

“We had one couple who were so happy to sleep under the cross [when the corps was an evacuation centre],” Aleasha said. “I think it gave them so much peace.” She spoke of another person, who came to Australia as a three-year-old, needing help with paperwork so he could access government support.

The Northern Rivers Corps has access to a Salvation Army Emergency Services (SAES) Winnebago. Salvo workers drive it to areas isolated from supports to provide emotional support and information and address physical needs. Philip explained that teams of up to 10 volunteers travel with the Winnebago. Some stay with the van while others doorknock to check in with residents and refer them to help if needed.

“We still have people coming to the outreach van and haven’t applied for any assistance four months after the floods,” Philip said. They are telling outreach workers that it has taken that long to get into the headspace to deal with it and start working through recovery logistics. Based on previous flood recoveries, some people still access help for the first time over two years after the event.

“The response has been overwhelming because the size and scale of devastation is huge,” Philip said. He explained that over 4300 properties were damaged just in Lismore and well over 10,000 in the Northern Rivers region. “Dealing with all the damage, the memories and trying to literally rebuild their lives is emotionally draining for everyone.”

Any time it rains, people become nervous. Many have anxiety about being rescued from rooftops. Some talk about nightmares of hearing neighbours screaming for help; others dream of floodwaters rising to their chins. There is ongoing trauma of deciding where to live, dealing with the cold of winter, and living in a tent pitched inside their damaged home. Philip explained that some businesses are still repaying loans from the 2013 flood and can’t see how they can continue after being destroyed again.

“The support the community needs now will still be needed in five years’ time,” Philip said. The government has provided extra funding and mental health support, but no one is sure how long it will continue. “What does our response look like when we have no more money to give out? This is a big discussion now. How do we help build resilience? What is possible for the Salvos?”

Philip said he is keen on mission trips. “We need visitors to help out, listen and sit alongside those affected,” he said. “We often forget how important that can be. We need visitors to spend money to help the economy, too, and show they [Lismore residents] aren’t forgotten.

“The needs are always greater than we can deliver, but we have been in the Lismore region for 130 years, and we are part of the long-term recovery.”