BMW turns the key on generosity for young mum BMW turns the key on generosity for young mum

Life is a highway, and it’s best we don’t travel it alone. That’s the belief of The Well at St Kilda Chapel Corps in Melbourne.

The Well plays an active role in the community under Major Narelle Jacobsen’s guidance, providing a safe and welcoming space for people to connect, build friendships and learn skills.

Over the years, Narelle has forged connections with community groups and businesses, which has led to partnerships that support vulnerable people at The Well.

One of these partnerships hit the road recently when the BMW Car Club of Victoria (BMWCCV) donated a refurbished vehicle to The Well.

The car has been handed to a single mother of three who was a victim of family and domestic violence and found refuge and support at The Well.

Rosie Di Giovanni, Program Manager for The Salvation Army Bayside Peninsula Family Violence Services, said the car donation couldn’t have come at a better time for the 33-year-old client whose children are all under 10. 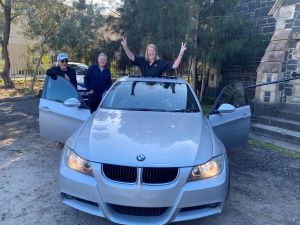 The relationship between The Salvation Army and BMWCCV began unofficially some years ago when Narelle, the Community Development Officer at The Well, met BMW club treasurer Phil Logan during an appointment at Kingston Garden Corps. Phil was The Salvation Army’s E-Plus manager in Cheltenham at the time.

“Phil contacted me once again to collaborate together to find a beneficiary to receive a car, and staff worked together with the Domestic Violence Service to choose a worthy recipient, which was a mother in need,” Narelle said.

After spying an old BMW in a Pick-A-Part car yard, which has locations in Kilsyth and Campbellfield, Phil contacted the business owner and Managing Director, Emma McIndoe, who agreed to donate the vehicle to the club.

Last week, after a working bee where 10 BMW car club members put together the best parts of two vehicles, the club handed over a BMW 2006 E90 320i car, valued at $7000. The remodelled, detailed, fully serviced and registered car also comes with the promise that all future services will be covered.

The club already owned a red BMW with a “dodgy engine”, so club members put the best of both cars together, giving the vehicle new tyres, a working engine, plus wooden trims and all the necessary fixtures. And what’s better, the ‘leftovers’ from the old red BMW now sit in Pick-A-Part’s yard, enabling the business to continue its sustainable and recycling-focused operations.

“I think this venture showcases The Salvation Army’s Vision Statement, which states that we aim to ‘transform Australia one life at a time with the love of Jesus’. To the mother receiving the car, our Vision Statement comes alive and becomes a reality,” Narelle said. The Well at St Kilda Chapel Corps was a perfect and picturesque location for the handover of the BMW to a client.

Hope on the road of life

With safety and reliability being paramount, The Salvation Army generally cannot provide vehicles to clients. Yet, in this case, due to the generosity of the BMWCCV, one family is on the road, and to ensure quality control, they will check the vehicle in three months.

The hope is the BMWCCV will be able to donate another vehicle in the next 12 months once members find suitable second-hand cars to modify. In addition, the club also supported a high-tea fundraiser at The Well earlier this month to fund the service’s ‘Harvest Love’ community garden and cooking initiative.

It just goes to show – this is about more than a car; however shiny and useful it may be. This is about collaboration, so a young family has a chance to start again and experience hope on the road of life.

“Thank God for the Salvos is something we hear often as we attend to the overwhelming needs of those who seek our help,” said Narelle. “This type of donation showcases what our mission is all about – transforming lives. It becomes a reality for people in need. Thank God for the BMW club.”

A special thanks to Sophie Mayes for her assistance in reporting.