You are here: Home › Reviews › Book Review You Shouldn T Have Joined A Memoir By Sir General Sir Peter Cosgrove In Sir General Peter Cosgrove’s latest memoir, ‘You Shouldn't Have Joined’, reviewer David Woodbury says, “one gets the feeling that behind the rank, the medals and the titles is a genuine, down-to-earth Aussie bloke”.

The latest offering of his life’s journey, You Shouldn’t Have Joined, A Memoir, compliments his previous book, General Peter Cosgrove, My Story, published 2006. 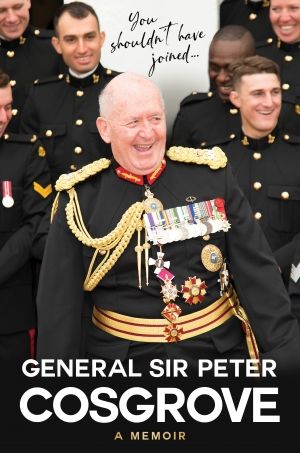 It is a kaleidoscope of his life from a scallywag lad on the streets of the inner Sydney suburb of Paddington, then one of Sydney’s more colourful suburbs, to the highest office of the land.

Each chapter deals with a segment of his life, including a chapter on his role in the Vietnam war, where he concludes by commenting about its impact on his life that he had “grown up” and “to use the old-fashioned word, it has become not a career, but a vocation”.

Of particular interest is Cosgrove’s discussion on the republic debate, which he concedes, “apart from minor and temporary eruptions, the republic volcano has just simmered away”. After looking at depth into the American system, Cosgrove concludes that the American Republic is as “divorced from the Australian situation as the earth is from the moon.”

Perhaps no one is better placed than General Sir Peter Cosgrove to bring some common-sense thinking to this debate and provide a rational and coherent insight: “We must preserve the notion of parliamentary government. That the authority and responsibility to protect, provide for and plan for the nation, for the moment and into the future, will be exercised through and within the Parliament.” He concludes the chapter with this comment, “But if on the crest of some perceived wave of national liberation we damage our successful system, that will be unfortunate”.

Throughout this book, one gets the feeling that behind the rank, the medals and the titles is a genuine, down-to-earth Aussie bloke, or one commentator has put it, Peter Cosgrove was a “person who walked with kings but kept the common touch”.

You Shouldn’t Have Joined, A Memoir by Sir General Sir Peter Cosgrove is available online and at major bookstores.