Someone once joked with me that if we really believed in Santa, we’d call the cops. What else would you do with a man who sneaks into your house at night, eats your food and warns you, “You’d better watch out!” if you fail to meet his standards? Fatman has just that sort of Santa. He doesn’t just dole out presents indiscriminately. And in drawing a line, he reminds us there is another figure behind Christmas with exactly the same attitude.

Right up front, readers should be aware that Fatman is not your usual family release. Rather, this is a production for the older viewer browsing the action section for their entertainment. There is teen-level violence and adult-level language, so just be cautious of inviting your little elves along for the ride. That said, it’s a pretty interesting story about a familiar character.

Santa has hit hard times. His operation usually benefits from a healthy government subsidy – his business actually encourages billions in toy sales across the planet. However, the number of deserving kids (and therefore deliveries) is decreasing, and so is his income. So, Santa decides to take on a government contract to build guidance systems for jet fighters, leading to his snowy compound being overrun by military types. Chris Kringle, played by Mel Gibson, is somewhat depressed by this, taking time out to spend time with his pistol and his punching bag. His wife, Ruthy, played by Marianne Jean-Baptiste, encourages him with her cookies and the reminder that, “... we knew what we were getting into.” But Chris remains down about the state of kids today. Kids like Billy. 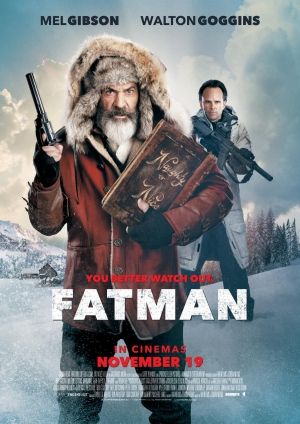 Billy, played by Chance Hurstfield, reminded me strongly of the horribly twisted minors in The Boys from Brazil. This privileged little brat is a thief, a torturer, and a boy with a hitman on speed-dial. When he gets a lump of coal from Santa instead of a present, he takes it very personally. He calls up his private assassin and sets him on the road north, with instructions to come back with the fatman’s head. What happens next is more like Reindeer Games than Miracle on 34th Street.

As we head into the silly season, there’s something refreshing about meeting a Santa like the one Mel Gibson presents. Sure, he possesses the usual heart of gold. His elves tell the soldiers that despite his grim outlook, “It’s the giving that keeps him going.” However, Chris’ gruff exterior is actually a throwback to Santas of yore, who were stern judges of behaviour. He is good to those who are good, but dismissive to those who are not. He goes out of his way to bring Christmas cheer, yet he is also aware of his constraints:

Assassin: This is the only thing that you got me [shaking a model car], after all the times I wrote to you!

Chris: I’m sorry son, there are limits to what I can do. I couldn’t replace your parents.

But this is also a fire-and-brimstone Santa. He menaces one delinquent with the palpable threat, “The fatman’s got his eye on you kid.” When the assassin comes knocking, a gun-toting Chris yells, “You think you’re the first? You think I got this job because I’m fat and jolly?!” This Santa is not the head-patting grandfather of Coca-Cola ads. He won’t let those who think they live, “… outside of morals and consequences” continue with their lack of respect.

Now, you won’t be surprised to learn that such a tale contains no reference to the original gift-giver behind Christmas. God, who gave the world his son in the form of a baby in a manger, is not anywhere to be found among the dialogue or decorations. However, some might say that he is present in Santa’s attitude. He, too, it might be pointed out, can be a very threatening character to the naughty and a blessing to the nice. But if that were only the case, we would all be in a great deal of trouble. Thankfully, Jesus tells us that the very people who realise they are undeserving can expect to receive the most from God:

“Jesus said to them, ‘It is not the healthy who need a doctor, but the sick. I have not come to call the righteous, but sinners’” (Mark chapter 2, verse 17).

And, thankfully, unlike Mel’s Chris, there are no limitations to his ability to save.

But let’s not put away the Fatman too quickly this festive season. The reason God created the first Christmas is because we are desperately in need of a saviour. And if we neglect so great a salvation, well, why would we expect to receive anything? If God and the Fatman have anything in common, it’s this: neither are moral pushovers.