You are here: Home › Reviews › Tv Review The Chosen The Chosen gives us a nuanced look at the life and times of Jesus and his disciples. (From left) Simon Peter (Shahar Isaac), Jesus (Jonathan Roumie), ‘Big James’ the brother of John (Shayan Sobhian) and Matthew the tax collector (Paras Patel).

Watching a film about the life of Christ is a great idea, but after years of seeing European actors give a less-than-nuanced shot at telling the story of Jesus’ time on Earth, I was ready to throw the towel in. 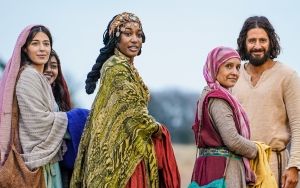 The Chosen highlights the pivotal role women played in the ministry of Jesus and the early Church. Key characters include Mary Magdalene (far left, played by Elizabeth Tabish), Mary mother of Jesus (second from right, played by Vanessa Benavente) and Jesus (right, played by Jonathan Roumie).

That was until I watched The Chosen, the first multi-season show about Christ of its kind. Because not only does this revolutionary TV series take the time to tell the cultural, societal and religious backstory of ancient Israel, but it gives us an insight into the beauty and power of Jesus and his followers.

The Chosen TV series has been crowdfunded by 19,000 people worldwide and began after filmmaker Dallas Jenkins created a Nativity-based short film for his church. The video gained so much traction online that it became clear people were thirsty for high-quality, authentic storytelling about the life of Christ.

So, instead of just wrapping the Gospels into a 90-minute movie, Jenkins and his growing team decided to raise $10 million to film one season, to chronicle the life of Christ and the early Church over seven seasons. And it worked – because season one became the highest-ever crowdfunded movie or TV series and has been translated into 50 languages.

In season one, we are introduced to Mary Magdalene, Mary (mother of Jesus), James, John, Matthew, Thomas and the ever-passionate (yet somehow still endearing) Peter and Simon.

Christ – a brilliantly warm and all-encompassing Jonathan Roumie – is the link between these diverse characters, and we see how they are each called to follow Jesus and what they must give up to do so. 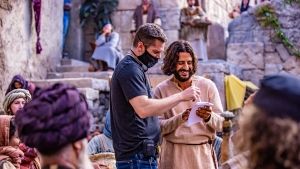 Dallas Jenkins (left) began the ambitious task of creating, directing and co-writing The Chosen after a nativity film he created for his church became popular on the internet.

Come season two, and we see the ministry of Jesus take shape. As his disciples grow and his miracles become widespread, so does his awareness that he is journeying towards death. And amidst all this, we witness the disciples proverbially wrestling with the concept of an authoritarian Messiah who will violently overthrow the Roman rule and the gracious, patient Jesus they live with.

The Chosen is truly heart-warming and spirit-provoking. I have found myself resonating with the humanity and insufficiency of the disciples and grieving with Jesus as he wears himself thin after ministering to people all day. This is by far the best iteration of Christ’s story I have seen portrayed on film – although it should be noted I avoided the realistic portrayal of violence in The Passion. It is yet to be seen how these filmmakers will handle the crucifixion and resurrection – but you can’t help but trust this cast with the tremendous responsibility.