You are here: Home › Salvation Stories › Detox Bus Took Me On A Journey To Faith

Detox bus took me on a journey to faith 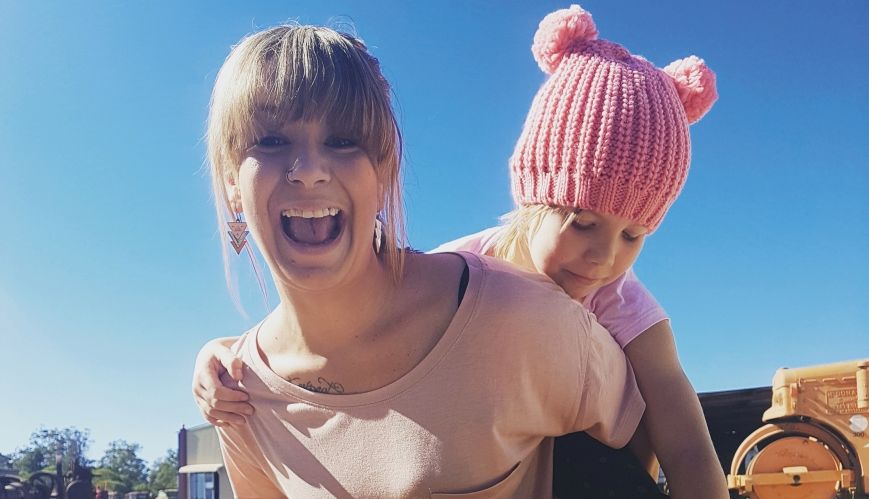 Detox bus took me on a journey to faith

Putting her faith in God was the turning point for Tash and her two daughters.

I never knew my dad, and my family life was full of the effects of mental health issues and drug use. I moved out of home when I was 15. My younger (half) brothers and sisters and I were close, but when I moved I lost those relationships.

I had a beautiful daughter when I was 16. When I was about 18, I started drinking heavily and my addiction started. I was already smoking a bit of pot. I was sort of functional; I had a job, I’d look after my daughter, and I was with her dad. But I was drinking every weekend.

When I was about 19, I first used the drug ice. I was a single parent by then. Things went downhill quickly when I started using intravenously.

I was buying ice all the time. I was working full-time but started using heavily and having really bad psychosis. I had nowhere to go and the place I was staying wasn’t suitable for my daughter. My work helped me get a rental, but I didn’t stop using. In the same week, I lost my job, my daughter was taken into care, and I lost my rental house. I was now homeless and living on the streets.

I was just a really bad drug addict; driving around with people, doing deals, and just kind of surviving. I finally got put into prison for a month and that was the best thing for me at the time. I got clean for a month and felt really happy and good.

But then I met a guy and fell pregnant again, and, sadly, I was using ice again by this stage. I got a unit when I was six months’ pregnant and in my head I was going to transform into a mum again, but when my baby was born – another beautiful daughter – she was taken straight off me in the hospital. She went into kinship care with her father’s family.

Life got worse, until I could clearly see what I had done. I jumped on an emergency bus to go to detox in Brisbane. At this stage, I hadn’t handed my life over to God, but from the minute I got on that bus I was at peace. I just trusted that whatever I was going to, had to be better than this.

After a handful of days, the detox had to discharge me. I ended up at The Salvation Army’s crisis accommodation centre, Pindari, and was so grateful to be there. My faith journey started when I got on that bus, but when I got to Pindari some ladies from a church invited me to an event, where I said yes to being prayed for and becoming God’s child.

I went from Pindari to the Moonyah (Recovery Services) centre and I was having contact with my youngest daughter every weekend. I graduated after eight months at Moonyah, then spent another two in transitional accommodation.

I now share-care with the dad of my youngest daughter and I’m building a relationship with my eldest child, too. I finished a Certificate 3 in business administration and I’m studying community services at TAFE. I go to the Salvos’ God’s Sports Arena church every Sunday – they have supported me the whole way through.

I also have a relationship with my siblings again. Like so many areas in my life, God has yet again done what I thought was impossible. There is no way I can deny that God put his hand on me and carried me all the way through this. I made so many mistakes, but I hope that my girls now have a much better future and that God will have his hand on their lives too!

* As told to Naomi Singlehurst.