You are here: Home › Salvation Stories › Stepping Into The Light

Stepping into the light Stepping into the light

Julie Maclean has lived in the Lake Macquarie area her entire life.

I grew up in Lake Macquarie in the Hunter region of NSW. We weren’t a church-going family. Mum and Dad had problems, as everyone does, and it was often kind of hectic. I could always run off into the bush, though, and down to the lake. I was very fortunate to have my grandmother, my dearest ‘Nanny Mac’, and I spent a lot of time at her place.

My first contact with the Salvos was in the 1960s when I was a young girl. I fondly remember that the Swansea Salvos band – in uniform and with drums, brass and timbrels – would march around the streets of Swansea. For a while, I was a member of the Salvos’ ‘Sunbeams’ [a group for girls aged 7-10 years].

I became a teenager and very rebellious around the same time my parents divorced. I was 15. I took off and went wild. I went anywhere and everywhere – I was a gypsy.

I became a sole parent at 19. It was heartbreaking for me, but I just set about doing the best that I could to look after my son. I was raised by parents who taught me that you don’t give up, that life isn’t a fairy tale, and you just keep going and always do your best.

Then I met a man who I thought was my ‘Prince Charming’ and we had two children – my beautiful twin boys. When they were three years old, I divorced my husband, and once again became a sole parent.

I was involved in lots of toxic relationships and doing all sorts of things. I did a lot of voluntary work and finished my education. I did a lot of good things, but they were temporary.

Deep down, I was just looking for love, real love. I now have four sons, praise God, and they are the joy of my life. They’ve always kept me going, even when I went through another relationship breakdown.

In February 2001, I just stopped one night and looked at myself. I took a long, hard, deep look inside because I was becoming very bitter. I didn’t like myself. I felt so bad that not only did my sons not have a dad, they didn’t have a very nice mum to look after them. That broke my heart. 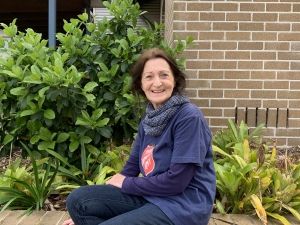 Julie Maclean is now an adherent at Eastlakes Corps and volunteers with the Green Team.

I was in a very deep pit. I had dug myself in so deep that I didn’t know what to do. I just knew I couldn’t go on another day feeling so bad. I was really desperate. As one does, I was calling out, “God, help me, if you’re real!” I’d been lost so long; I didn’t know anyone was looking for me.

The most amazing thing happened! I looked up and Jesus was there! And he didn’t condemn me. I had been condemning myself all those years. I looked up, and I can only describe [what I felt] as a perfect peace and a calmness that I had never known. And I looked [at Jesus] and I was awestruck, and I said, “You’re real! You are real!” And he smiled and said, “Yes, I am real.” And I recalled a verse of Scripture that I hadn’t heard since I was a little girl, since I was a [Salvos] Sunbeam – “I will never leave you or forsake you” (Deuteronomy 31:6).

On Sunday morning, 18 February 2001, I went to church at Eastlakes Salvos. There, at the foot of the cross, I was led by the lovely Salvation Army people to give my life to Jesus and be born again. It was the best day of my life so far.

Now, I have a purpose with our Eastlakes Salvos family, sharing the love of Jesus with others. Life is amazing – learning and growing on this journey with Jesus.