You are here: Home › Salvation Stories › Surrendering To God Ended My Battle With Addiction

Surrendering to God ended my battle with addiction 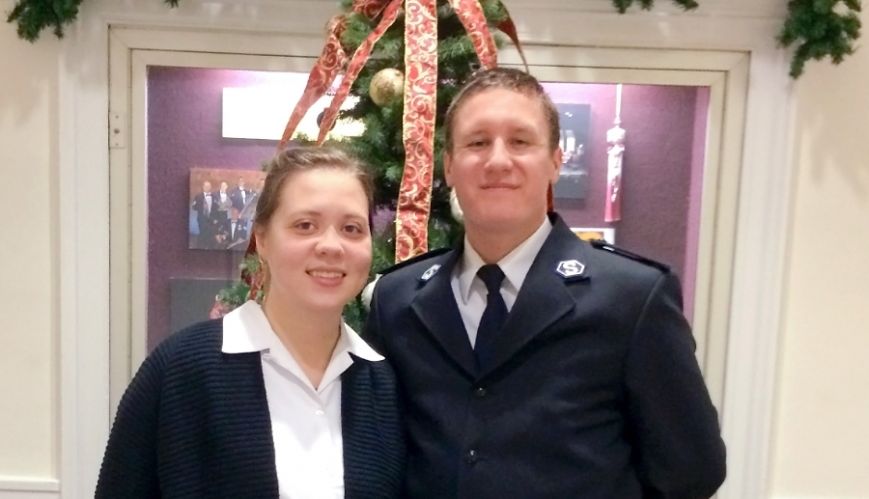 Surrendering to God ended my battle with addiction

Chris Edwards with his wife, Natalia.

I grew up in a good home with a hard-working family.

I had a Christian upbringing. I was about 13 when I got involved with drinking, marijuana and cigarettes.

It was a fun and rebellious kind of thing, but while others were dabbling, I took it to a very different level and was soon seriously addicted.

I was smoking marijuana every day and going to school stoned. Soon I was experimenting with other drugs like speed, ecstasy, cocaine.

It was pretty devastating for my family and others close to me to see that I was slowly destroying myself. I didn’t see that at all.

I was quite a high-functioning alcoholic/addict and thought I was fine. I got a job at McDonald’s so I had money for drugs and alcohol, but I was always in debt and always chasing to pay for the experiences that I’d already had.

There were a number of times I attempted to stop, and I had periods where I did, but it never lasted. I secured a job with a bank just before I was 18 and I managed a break from drug use, but unfortunately I relapsed and started to use the drug ice. Over this time, I’d lost cars, jobs, friends.

I was in a position to buy a house when I was about 19, but I lost that opportunity and spent the deposit on my addiction. My family always hung in there.

They never approved of my lifestyle but always tried to support me. They stuck by me throughout all that and kept encouraging me to get some help.

Everything was going wrong and, at a family gathering, I just sort of “woke up” and thought “what am I doing?”.

At that stage I prayed and said: “God, I hope there’s a life better than this because this is not what I want, but I can’t do anything about it.”

That was in early January 2013. I decided I really needed long-term rehab and The Salvation Army’s Dooralong Transformation Centre (on the NSW Central Coast) had just opened.

I’d gone to Dooralong as a kid when it was a resort, and so I had a great association with the place. On entering Dooralong, I started attending chapel and it was amazing just seeing everybody so happy and free.

I wanted that but, at first, didn’t know how to find it. I also went out to Bonnells Bay Corps, then connected with Long Jetty Corps.

I really respected the workers and caseworkers at Dooralong, who’d also been through the bad stuff but were now openly sharing about the Lord in their lives and helping in practical ways with people.

In my second week, I heard the gospel message – the message of forgiveness and love – and I just handed my life over. I asked God for forgiveness.

It was a very special day for me and I have never really looked back. God, through his son Jesus, has been continuing to transform my life in every way.

I graduated from Dooralong and have since married Natalia, a Salvation Army soldier from Russia whom I met at what is now called the Salvos Discipleship School.

I qualified as a youth worker and now serve as a ministry assistant at The Salvation Army’s Oasis centre in Wyong.

I was trying to fix things my own way, but when I really surrendered to God he restored and transformed so much of my life. A relationship with God is the only path in life that offers true hope and meaning.