You are here: Home › Viewpoint › Is The Party Over

Is the party over? Is the party over?

Will future historians look back on this ‘corona-year’ as the ‘end of the party’ for western culture? Photo Randy Tarampi

Belshazzar’s feast (Daniel 5) was a great display of wealth, power and hedonism with his wives and concubines entertaining a thousand guests using the golden and silver utensils from the temple in Jerusalem.

Suddenly the fingers of a human hand appeared and wrote on the wall. Summoned to explain the riddle of the writing on the wall – mene, mene, tekel, upharsin –Daniel speaks out the judgment to the Babylonian king: “You have been weighed in the balances and found wanting.” That very night, we read in the Bible, Belshazzar was slain and the forces of the Medes and the Persians entered the city. The party was over. 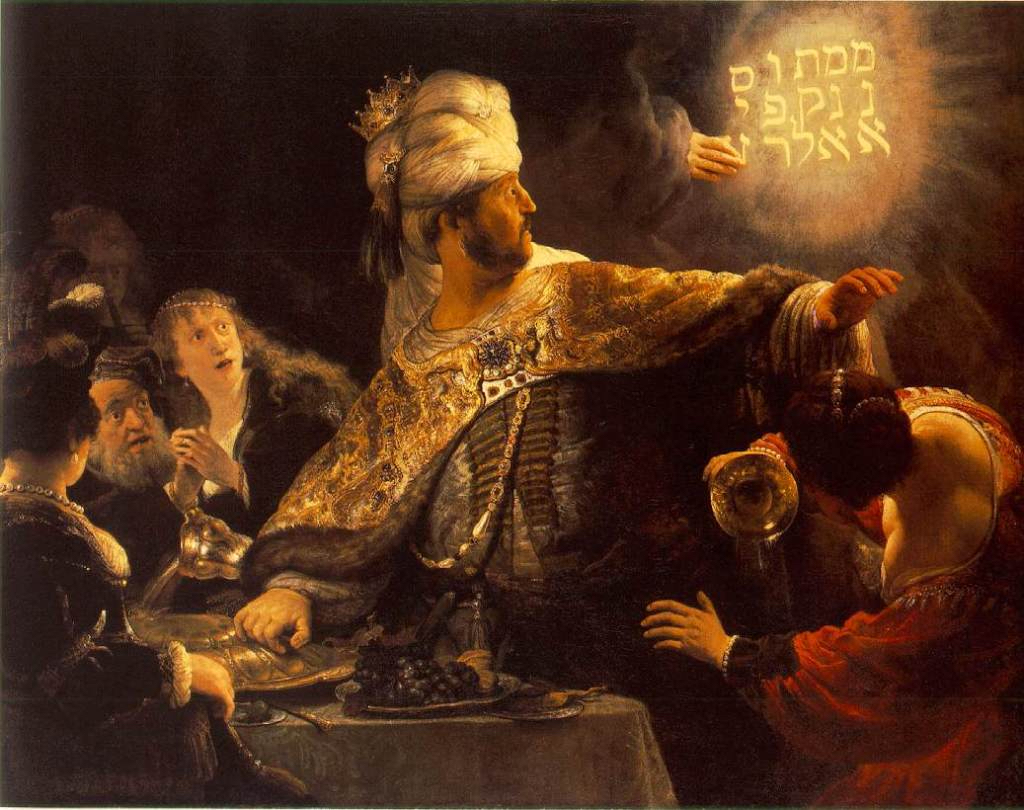 Rembrandt’s painting Belshazzar’s Feast, which is housed in the National Gallery in London.

In Rembrandt’s painting of 1635, the fear is palpable on the face of Belshazzar and his guests. The artist dressed the king luxuriously as an extravagantly rich Amsterdam merchant at the height of the Golden Age, when exploration, trade – and slavery – had made the fledgling Netherlands the richest and most powerful state on earth. Was Rembrandt warning his fellow Dutchmen about the transience of wealth, power and pleasure?

For Belshazzar, the end came overnight. For the Netherlands, the Rampjaar – the year of disaster – came a generation after this painting in 1672, when the republic was ravaged by the armies of England, France and the bishopric of Munster and Cologne. For 17 months, banks, schools, shops, courts and concert halls were closed. Many bankruptcies followed. Recovery took decades.

Will future historians look back on this ‘corona-year’ as the ‘end of the party’, a ‘rampjaar’? Suddenly we have been jolted out of ‘normal life’ and plunged into an uncertain, indefinite period of isolation and disrupted routine. Physical health, economic health, mental health, political health, family health, social health – all are at stake.

Creative responses, humour, goodwill and collective applause for our medical heroes working to minimise disaster have helped us weather the first month after awakening to the rude realities. But what if it becomes two months, six months, or, God forbid, the 17 months of the Rampjaar? Do our societies today share sufficient common values to prevent social unrest from erupting?

Even before the corona crisis, many had expressed alarm about what British Lord Jonathan Sacks calls the ‘cultural climate change’ we are living through. Titles like The Strange Death of Europe, The Suicide of the West, The Decadent Society, How Democracies Die and The Fate of the West talk of Western culture as “demoralised, decadent, deflating, demographically challenged, divided, disintegrating, dysfunctional and declining”.

Sacks, in his recently published Morality, explains that market economies and liberal democracies cannot themselves guarantee us freedom. Morality is the missing dimension, essential to freedom, he writes, quoting John Locke who contrasted liberty, the freedom to do what we ought, with licence, the freedom to do what we want. Markets and economics are competitive. Morality is cooperative. Morality is the conscience of society, the commitment to the common good, which governs our pursuit of private gain. Society is constituted by a shared morality, and creates trust.

The truth that free society is a moral achievement has been forgotten, ignored or denied since the moral revolution of the 1960s, says Sacks. Since then, he argues, a single underlying shift in the ethos of the West has produced identity groups, collective victimhood, loneliness, vulnerability, depression, drug usage, merciless markets, polarised politics, growing economic inequality and intolerance for free speech on university campuses. These are the long-term consequences of the move from ‘we’ to ‘I’. Social isolation has replaced community.

Prior to the watershed of the 1960s, Western open societies had been pluralistic, built on values of freedom, equality, democracy, rule of law and human rights. It was a limited ‘we’ pluralism that has been replaced by a far more radical ‘I’ pluralism divorced from the historic Judeo-Christian consensus. The human being was simply a sovereign will, an autonomous individual, an arbitrary centre of volition, free to make of oneself and the world whatever one chose. Sacks quotes research showing the use of ‘I’ has increased over the past half a century while ‘we’ has decreased.

But the unprecedented challenge of the corona crisis also presents an opportunity. Suddenly we have all realised our common vulnerability. Never in human history has our common fate been shown to be so interlinked – all 7.8 billion people on this planet. Our dependence on each other and the systems of society – local, national and global – have become obvious. Could self-isolation lead to a renewal of the ‘we’? Will ‘we’ prevail?

Jeff Fountain is director of the Schuman Centre for European Studies. He blogs at weeklyword.eu