You are here: Home › Viewpoint › Salvation Army What Happened To You

Salvation Army - what happened to you? Salvation Army - what happened to you?

Many smaller Salvation Army corps began closing to arrest a decline in membership in the second half of the 20th century. Maybe it’s time to reopen them with a new focus. Photo Tim Mossholder on Unsplash

I celebrated my 81st birthday this year, and, I guess, like many before me, it has become a time of reflection, review and evaluation. The world of my boyhood is a vastly different world from that which I exist in today.

For the first 25-30 years of my life, there were not great cultural changes. On any given Friday night or Saturday, if you walked down the main street of most suburbs, you would probably have to step off the footpath to get around the crowds gathered at the local pub. They were, in a sense, a place of community gathering and interaction, mainly for males.

RSL clubs overflowed with patrons, and membership of a service club like Lions or Rotary were prized relationships, only available to those who could be sponsored. Suburban movie theatres drew crowds every weekend, and the drive-in movies were a great family event.

For The Salvation Army, the Sunday night ‘Salvation’ meeting was a big event. In my home corps, the only people assured of a seat were the officers and band who sat on the platform. If you wanted your favourite seat, you needed to get there early.

By the mid-1960s, the impact of television saw families re-allocating free time at the expense of many of the social activities of the 1950s. In the decades that followed, suburban movie theatres began to struggle, and many simply closed. In the early ‘50s, a family motor vehicle was somewhat rare, but by the late ‘60s, most families had a vehicle, sometimes more, as teenage children acquired driving status.

By the late ‘60s, cultural change began to emerge with “the permissive 60s”. Social norms were challenged, and feminism and the availability of the contraceptive pill saw women seeking equality and freedom. Although the cultural changes were relatively small and incremental, they were seismic by the turn of the century.

Some organisations were awake to the cultural change and could read them and adapt; others just plodded on with the old, blinkered mindset. RSL clubs were a prime example: some quickly saw the changes and adapted their operations, particularly catering for family dining. Others began to decline, some merged and others just simply faded away.

In some ways, The Salvation Army was either indifferent or perplexed, perhaps unable to read the cultural changes and seemingly unable to adapt its operations and programs; a steady decline in interest and numbers began. Corps began to close or merge in what was a futile effort, in some ways, to arrest the decline.

In trying to comprehend today’s culture, perhaps the telling question we ought to be asking is: Where is the place of community gathering and interaction today? Certainly not the local suburban pub, since many of these are long gone, and most of the remaining ones no longer draw crowds that spill out onto the footpath. The reality is today that you may well have to step off the footpath to avoid the crowd waiting for a table at the local coffee shop. 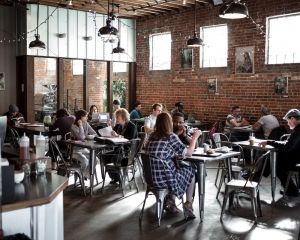 Cafes have become the place where people congregate socially.

What are we to read about today’s culture from this phenomenon? Perhaps it is simply this: people want the intimacy, friendship and strong familial style bonds that a small group provides, and no other group is better equipped in this area than members of the local Christian community.

I am well aware that there are some Christians switched on enough to understand this and have moved outside the confines of their churches and commenced such groups based on an incarnational framework. Unfortunately, they are few in number and ministry of this style needs to be actively encouraged.

As good as these groups are, they have their limitations. By their very nature, they are small groups and generally self-limiting unless they have the courage to divide and multiply. They have little impact on the public space unless they are willing to break out of their circle to embrace the wider community intentionally.

As we have already discovered, people are looking for small groups that offer intimacy, friendship and strong familial style bonds; that is today’s cultural landscape and the group best placed is the local Salvation Army, small corps. Curiously, as we realised this cultural shift to small, intimate groups, we were busy closing small corps and effectively removing our presence from the public space.

Many will take the economic argument that we can no longer afford the expensive upkeep of a set of buildings designed when corps had large bands and other sections that required many rooms, and I would quite agree. But to simply shut down a corps on basically economic grounds indicates a lack of vision. Perhaps all a small corps needs is an unused shopfront, of which there are many today. From such a place, the corps could run its usual programs, outreach programs such as community meals etc. and enable its incarnational groups a place to gather. Such a move would keep a Salvation Army presence in the public space.

Next week: What does a shopfront corps look like?

Major David Woodbury is a retired Salvation Army officer and was the first editor of the former Australia Eastern Territory's monthly magazine Pipeline.