You are here: Home › Viewpoint › Salvos Catch Sight Of The Big Picture As National Vision Rolls Out Aligned Vision, says Commissioner Tracey Tidd, is about, “ensuring all of our efforts are moving in the same direction, building strength upon strength through our diverse and complementing ministries”.

"A new vision? Seriously! Again?!” Hayley Grigg, Youth and Children’s Ministry Administrator in the NSW/ACT Division, admits that was her reaction when she heard about the National Vision being rolled out around the country. But that thinking did not last long.

“It’s actually been so refreshing!” she now says. “Last month, I visited three di erent corps and they were all teaching on the same vision. It makes sense for us all to align under one vision, rather than having lots of local ones. I think it’s making us stronger and more focused.

“I like that the vision shows how the different expressions of The Salvation Army fit together too. In my administrative role, I might not be engaging directly with people experiencing homelessness, but it is so helpful for me to realise that all of us – wherever we serve in the Army – are working to help achieve that same big picture vision.”

“Aligned Vision” is one of the six “whys” of the national transformation journey. On 1 June 2016, a video message was sent to Salvos around our nation. Within it, Commissioner Tracey Tidd, National President of Women’s Ministries, explained that Aligned Vision is about, “ensuring all of our efforts are moving in the same direction, building strength upon strength through our diverse and complementing ministries”.

Since that video announcement, significant progress has been made toward alignment of our vision across Australia. About 2500 people contributed to the shaping of the National Vision, thousands have attended Leading Our Vision and Living Our Vision workshops and, in recent weeks, Salvos throughout the nation have been engaging with our National Vision during a Vision Booster campaign.

Across the campaign’s six-week period, Salvos of every age and in every expression have been using video clips, sermons and discussion group materials to interact with the National Vision Statement line by line.

As the National Vision Booster campaign draws to a close, National Chief Secretary, Colonel Mark Campbell, reflects, “Some people were sceptical about the National Vision at first, with a lot of unanswered questions. But I am seeing a change as people come to a place of realisation that having one vision, and working towards the same big picture goal, is best.”

National Commander, Commissioner Floyd Tidd, agrees. “As I have travelled around the country, I have had an overwhelming sense of people embracing and aligning themselves with the vision,” he says. 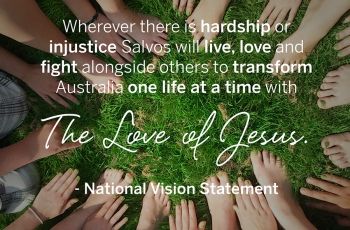 Captain Steven Smith, Head of Mission Resources, has enjoyed seeing Salvos from the breadth of Salvation Army expressions engage with the vision during the campaign. He was with the Indigenous Ministries team when they were watching one of the video clips about the National Vision for the first time.

“I saw their eyes light up and they got quite excited,” he says. “They saw a commonality with the vision graphic and the Indigenous artwork that we’ve been using. It was so good to see their heart and passion ignited. At its best, our vision awakens and inspires the heartbeat of people across our wide and diverse Army.”

The six-week campaign concluded on Sunday 18 March in corps and, in the days that followed, in support services and other missional expressions, with a special time of vision commitment and covenant renewal.

An additional opportunity to show solidarity with and commitment to the National Vision is available at others.org.au/visioncommitment.

This may be of particular interest to those who have not been able to attend a Vision Commitment event. However all Salvos are invited to head online and show their commitment to making the vision a reality in their own setting.

Claire Hill is the Communications Coordinator for the Transition Support Team.