You are here: Home › Viewpoint › The Soldiership Dilemma 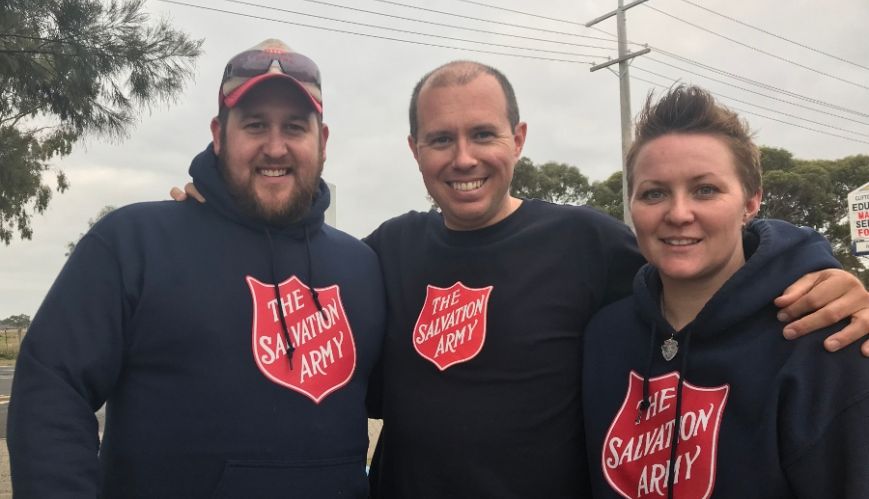 Peter Hobbs (centre) opens up the question whether we have made soldiership too exclusive.

To be a disciple of a rabbi in a Jewish system you had to be the best of the best.

You had to be someone who jumped through a lot of systemic hoops in order for a temple rabbi to invite you to “follow me”.

It’s interesting that when Jesus started his ministry, he changed the reality of disciple making. He shifted the requirement from being about moral motivation, to himself being the motivation.

He empowered people who didn’t fit the established temple/disciple mould. He connected with “unclean people”, those whom Jewish society wouldn’t have allowed to get anywhere near the temple to worship God. For example, the tax collector Matthew would not have made the cut because his profession and the port where he collected taxes were a disgrace to the Jews.

Jesus called the disgraced Matthew to “follow me”. “Follow me” is what a rabbi says to the best of the best.

So, when Jesus called the worst of the worst to follow him, he sent a strong message to the Jewish religious establishment that the mission had shifted. It was now not only for the Jews but for everyone, and this not only showed Matthew how special he was to God, but even more radical, that he could be a respected missionary of the Gospel and socially reconciled because of Jesus.

Jesus opened up the requirements for what it meant to be a disciple.

He simply saved and then sent, simplifying discipleship to what he originally intended.

Why did he do this? I believe it was for intentional missional strategy. He made this change because God’s answer to problem solving is involving all kinds of people.

Jesus recruited people who spoke the cultural language of those around them and didn’t let anything get in the way of his movement. He started a passionate and internally motivated Kingdom movement, got rid of the movement blockers, and empowered people to share the Good News that the Trinity would restore everything.

He invited/recruited everyone to be involved in his mission without discrimination. In a Salvation Army context, the idea of becoming a disciple is similar to becoming a soldier. To become a Salvation Army soldier, you have to do soldiership classes, promise to live a high and moral life where you’re not going to drink alcohol and smoke, etc.

Here’s the problem: Jesus would make a great adherent. Soldiership not only excludes Jesus but it also excludes the majority of people within our society who don’t wish to make these lifestyle promises. Many people will say, “What’s the problem? That’s why we have adherency, which caters for people who don’t want a ‘higher calling’.”

However, this higher calling creates a two-tier exclusiveness, which Jesus opposed, and allows for unbiblical power and segregation problems within community.

The adherents in my ministry setting are as equally passionate and active followers of Jesus as our soldiers, except the adherents can’t become officers because they are not soldiers. They would argue that they are genuine soldiers because they have encountered Jesus, and he has transformed their lives to the point where they now partner in the mission of God.

So, I ask the question, is soldiership as it exists today similar to temple discipleship in Jesus’ day? A movement blocker? If so, how do we fix this?

Well, the answer is to be like Jesus, remove the blockage and model a different reality. Soldiership would then be something close to: Anyone who follows Jesus and acknowledges his presence in their life and who is part of our Salvation Army family on mission together, is a soldier in The Salvation Army.

The benefit of empowering all people into a soldiership journey with Jesus like this, is that it creates an environment of equality without condemnation, simplifying soldiership to what Jesus originally intended.

When soldiers are raised by being on mission with Jesus, we will also see a radical increase in spiritually mature apostolic and prophetic leaders in The Salvation Army – the type of leaders who pioneer movements.

I’m aware this could be a controversial topic within The Salvation Army, but no more controversial than it was for Jesus when he introduced it to Judaism 2000 years ago.

If ever the world needed a movement of soldiers it is now. The only requirement is Jesus, and he is enough.