You are here: Home › Army Archives › An Army Behind Bars

An Army behind bars An Army behind bars

Captain Farquarson (left) was imprisoned in Wollongong in 1888 with a number of comrades. Elizabeth Adlington, one of the first members of the Wollongong Corps, was also imprisoned for preaching the Gospel and protesting about her comrades’ imprisonment.

For the early Salvation Army in Wollongong, south of Sydney, persecution and imprisonment was just part of the cost of proclaiming their faith.

The Salvation Army hasn’t always enjoyed the high level of support and respect in Australia that it does today. The reality is that many of our early Salvationists paid dearly for their right to proclaim the good news of salvation.

Public ridicule, harassment and imprisonment by civil officials were all part and parcel of life in the early Salvation Army. The fact that the Army didn’t shy away from persecution was evident in its readiness to take on municipal officials and the law and spoke of its commitment to its faith.

It may well be that this characteristic was what eventually endeared the Army to the hearts of Australians. Within months of taking command of the fledgling Salvation Army in Australia, Captain Thomas Sutherland was summoned before the court for singing in the streets of Adelaide in July 1881.

There followed many years of persecution and imprisonment for Salvationists throughout Australia. Central to the action taken against Salvationists was a council officer known as the ‘inspector of nuisances’, or the nuisance inspector. During the late 19th and early 20th centuries, many councils employed a person in such a role. It seems to have had a wide-ranging job description that allowed various inspectors to harass the early Salvation Army.

In the City of Sydney, the archives record that the inspector of nuisances was responsible for keeping the city clean, sanitary and safe. This included inspection and condemnation of food offered for sale in markets and on the streets, inspection of dangerous buildings, nuisances and hoardings, prosecution of breaches of the bylaws, and keeping thoroughfares free from obstruction.

In the City of Perth, the inspector of nuisances was also responsible for sniffing out bad smells, like those emanating from swamps and marshlands.

In Manly, the inspector was required to capture runaway horses, cattle, pigs, etc., and hold them at the council’s animal pound until reclaimed and a fine paid by the owner.

There seems to be no doubt that the wide interpretation of “keeping thoroughfares free from obstruction” and “prosecution of breaches of the by-laws” was ruthlessly implemented against The Salvation Army by individuals holding the position of inspector of nuisances.

Wollongong, south of Sydney, was the focal point of this activity by the inspector of nuisances. During the latter part of 1888, Lieutenant John Faulks Tuckerman was charged with violating a municipal bylaw by parading the streets in a musical procession without the written permission of the mayor.

The lieutenant had engaged in an open-air meeting by himself, blowing a cornet and singing salvation hymns. It was no doubt part of the passing parade of entertainment in Wollongong as there were many people in the street watching the proceedings, anticipating that the usual course would be pursued by the officer of the council who was empowered to take action, no doubt the inspector of nuisances. 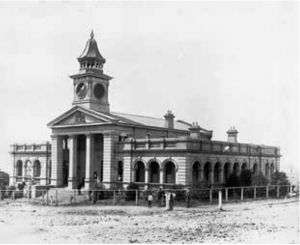 Wollongong Courthouse in the late 19th century, where many Salvationists found themselves after promoting the Gospel on the streets.

Defending himself at Wollongong Court House, Lieut Tuckerman contended that one person could not form a procession, and consequently, the by-law could not apply to him.

The police magistrate replied that there was no doubt the defendant was proceeding up the street, his so doing was a procession, and as he was playing a musical instrument, it must therefore be a musical procession. If he had not broken the law in the letter, he had in the spirit. Lieut Tuckerman was found guilty and ordered to pay a fine of £3 or go to gaol for two months.

Another officer, Lieut Henry Richardson, was also found guilty of a similar offence and received the same penalty. Both officers refused to pay the fine and were subsequently imprisoned.

Tuckerman and Richardson were soon followed by Captain Farquarson, a Salvationist named Bourke, and Lieut Haycraft, who all faced similar charges and found themselves in the cells with their comrades.

Not wanting his officers to feel abandoned, the divisional officer for Southern NSW, Major Charles Jeffries, arrived in Wollongong and immediately set about holding a street meeting. He had hardly sounded a few notes on his cornet when the inspector of nuisances took his name. His rank and position mattered little, and the major found himself supporting his officers from the gaol cell.

By November 1888, seven Salvationists were imprisoned in Wollongong, including a founding member Elizabeth Adlington, for proclaiming the Good News of salvation. At her funeral in 1922, the story was told of Elizabeth “... many times going out on her own and preaching the Gospel ... on one occasion after some of the soldiers had been imprisoned for holding a meeting in the street, she took the army flag and her baby and marched through the main street in defiance of what the hand of the law would do.” She was apparently “put in jail for a few hours”.

The situation began to escalate as other clergy and members of the public took up the Army’s cause, and a rally in The Domain in Sydney was told that the attitude of the mayor, Mr WJ Poulter, was one of persecution. Although Mr Poulter was present at the rally and sought to defend his position, it was soon obvious that public opinion was against him.

By early December 1888, the furore had reached the ears of the Governor of NSW, Lord Carrington, and he ordered the Salvationists to be released pending an appeal that The Salvation Army was lodging with the High Court in Sydney. In the subsequent appeal, heard before Chief Justice Sir George Innes and Justice Foster, the chief justice held that the bylaw made by Wollongong Council was unreasonable and ultra vires (beyond their powers) and that in any case, the punishment inflicted on Tuckerman was excessive.

Although the matter was resolved in Wollongong, Salvationists around Australia were still regularly imprisoned until around 1907, when official and public opinions began to change. Following the persecution, the Army embarked on a period when its presence on the street was not only welcomed but eagerly anticipated by many in the community.