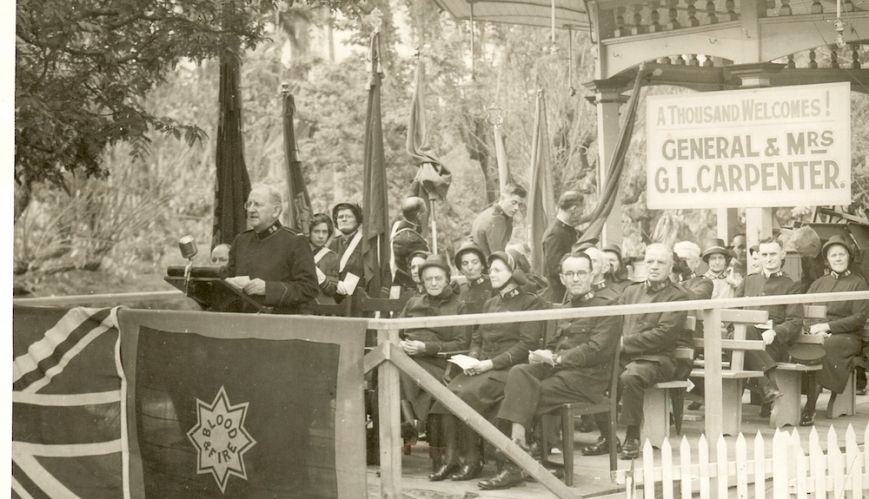 General George Carpenter addresses a crowd during an outdoor service on a visit to Australia.

In part two of this special feature, Others continues the profile of General George Carpenter who, after being banished back to Australia by General Bramwell Booth for his candour, was to rise again to lead The Salvation Army through the dark days of World War Two.

In January 1929, a High Council of The Salvation Army was called by the Chief of the Staff, Commissioner Edward Higgins. General Bramwell Booth, who had been ill for some time had been asked to retire, a request he’d refused. As a result, the High Council terminated the active service of General Booth, and Commissioner Higgins was elected the third General of The Salvation Army on 13 February 1929.

With the change in international leadership came a change in appointment for George and Minnie Carpenter. On 15 April 1929, George Carpenter was appointed as Chief Secretary of the Australia Eastern Territory, a post he held until 1933 when he was promoted to commissioner and appointed to lead The Salvation Army in Argentina, Uruguay and Paraguay.

Upon his arrival in South America, George Carpenter discovered the territory was in serious debt. George and Minnie Carpenter approached the dilemma as they had many times in their lives – on their knees to God in prayer. Soon afterwards, a phone call early one morning from an excited officer informed the commissioner of a considerable legacy that had been left to the Army. It was to become just one of the many financial contributions that came as an answer to their faithful prayers. 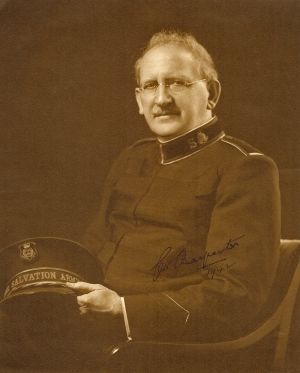 George Carpenter was The Salvation Army’s world leader from 1939-1946.

A cable from General Evangeline Booth, who had succeeded General Higgins as the international leader of The Salvation Army, arrived for the Carpenters in May 1937. It read: “DESIRE TO APPOINT YOU TO CANADA – WISH TO KNOW YOUR VIEW.” Commissioner Carpenter replied by cable: “SURPRISED HUMBLED DARE NOT REFUSE WILL GO IN THE STRENGTH OF THE LORD.”

While financial challenges in Canada were different from South America, George Carpenter soon discovered the Great Depression which had swept the world had left a severe stain on resources there. However, he soon realised that what was needed was not so much financial resources as human resources.

As he moved about the country he laid the claims of God through officership before young people. To his delight a number responded, resulting in a training session in 1938 of 50 cadets. With the imminent retirement of General Evangeline Booth a High Council was convened in London in August 1939, to which George Carpenter was summoned.

Searching through the list of officers with whom he had cultivated friendships over the years, George Carpenter looked for a man of vision, courage and faith who would lead the Army in the critical days ahead. Although there was strong feeling that he would be nominated he neither sought it nor expected it, but would consider it should it occur.

Rock in the storm

On 15 August 1939, with the storm clouds of war gathering over the world, the High Council of The Salvation Army met to elect a new leader. Commissioner Carpenter led from the first ballot and on 24 August 1939, was confirmed as the General-elect. Later he was to say of that occasion: “Were I not clearly conscious of the Divine overruling in the deliberations of the recent High Council, I might well have hesitated to accept such a charge.” George Carpenter went on to acknowledge that he anticipated that the days ahead would be dark and difficult. “It is possible that we are on the edge of testings and trials in the world. We must be steadfast in courage and faith.”

For George Carpenter, his time as General coincided with what was perhaps the most traumatic and disturbing period the international Salvation Army has had to face, as World War Two raged around his global organisation. His term began at a headquarters sandbagged against air attacks and ended with an Army whose officers and soldiers were decimated by almost six years of conflict.

To compound Carpenter’s leadership hardships, in May 1941 International Headquarters was completely destroyed by fire following an air raid, with the consequent disruption of every department of the Army. Many documents and records were either destroyed or so badly damaged or destroyed that it became increasingly difficult for effective administration.

With war restricting his ability to travel the world as Salvation Army leader, George Carpenter used his literary skills to not only reach but also encourage his people. His regular column, ‘From My Desk’, made its way into every War Cry that could be accessed during those difficult years. The funeral procession for General George Carpenter leaves Sydney Congress Hall after he was promoted to glory on 9 April 1948.

On 20 June 1945, General George Lyndon Carpenter was due to retire and vacate the office of General as required by Salvation Army regulation. However, wartime restrictions had made it impossible to assemble a High Council in time. Following correspondence between the Chief of the Staff and Salvation Army leaders around the world it was decided to extend General Carpenter’s term in office until June 1946.

George and Minnie Carpenter retired to the Sydney suburb of Earlwood. Sadly, the General’s retirement was brief; he took ill and was promoted to glory on 9 April 1948, aged 75. A funeral service was held at Sydney Congress Hall before his body was interned at Rookwood Cemetery in Sydney.

His successor, General Albert Orsborn, was later to pay tribute to Carpenter’s life: “My outstanding impression of our fifth General was of translucent honesty and simplicity ... He was not of the world, but he lived in it, and always made shrewd appraisals of men and events.”

The London Times, in its obituary, recalled: “He gave them what he promised on the day of his election – ‘an example in simplicity, an example in faith, an example in sacrifice, an example in courage’,” while the Sydney Morning Herald paid its own tribute to his life and ministry: “General Carpenter has been described as one of the greatest and most saintly sons of Australia.”