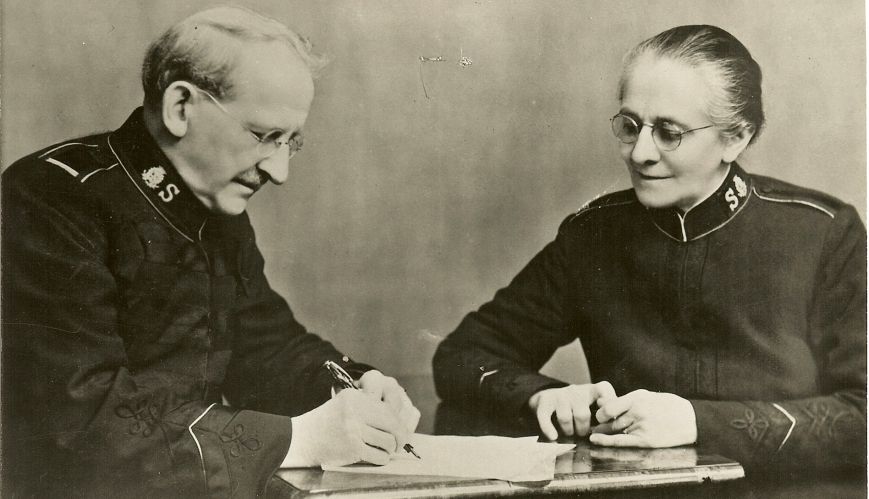 Australians George and Minnie Carpenter guided The Salvation Army through the turbulent years of the Second World War as the international leaders of the movement.

From the floor of a printing shop to guiding The Salvation Army through one of its most difficult periods, General George Carpenter may well be one of the Army’s most unheralded world leaders. In part one of a two-part series, Others profiles the first Australian to become General of the Army.

As the insanity of World War Two plunged the planet into a great abyss, The Salvation Army needed a steady hand on the tiller. That hand was the hand of Australian-born George Lyndon Carpenter.

The history of The Salvation Army is littered with stories of people who, under the direction of the Holy Spirit, have carved out a ministry for God and the Army from humble and insignificant beginnings. Perhaps none has been more remarkable than George Carpenter, the fifth General of The Salvation Army.

It may well be that George Carpenter is one of the unsung heroes of our movement. From the floor of a printing shop to lead The Salvation Army through one of its most difficult times; from a rebellious larrikin to a senior officer unfairly censured by General Bramwell Booth, George Carpenter’s character was refined and tried by the fire of adversity and conflict, yet he emerged as gold.

Born in the Hunter Valley region of NSW on 20 June 1872, the grandson of English immigrants from Bristol and son of Tristan and Hannah Carpenter, George’s initial urge was to become a teacher. However, as a young man, he took up a position as an apprentice compositor with the Gloucester Gazette (later to become the Raymond Terrace Examiner). His early experience at the Raymond Terrace Examiner and then on the Blue Mountains Express provided him with a good foundation for his life’s work.

One autumn Sunday, George was persuaded by his mother to attend a service led by Joseph Walker at the local Methodist chapel. Following a personal word from the preacher, George knelt at the communion rail and said “Yes” to God.

Shortly after being elected as the fifth General of The Salvation Army, George Carpenter was to tell a newspaper reporter of that experience: “My whole life was changed, and from that evening I decided to devote my life to spiritual matters. I joined the local Salvation Army and immediately took an active part in its work.”

By 1892, George had heard God’s call to be an officer in The Salvation Army and filled in the necessary forms. A letter of acceptance soon arrived from Commissioner Henry Howard, and George informed Army headquarters in Melbourne that he would arrive at the end of May to commence his training. 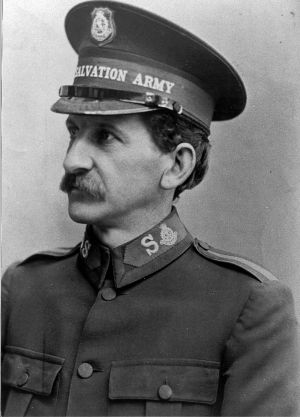 George Carpenter as a young officer in Australia.

On 27 May 1892, George Lyndon Carpenter arrived at The Salvation Army Training Home in Punt Rd, Richmond, Victoria, and with 35 other men cadets, commenced his training. Following six weeks of intensive training, Probationary Lieutenant Carpenter was appointed to special duties in the property department at Territorial Headquarters in Melbourne.

Among his many duties was the management of the officers’ hostel at Marchmont in Melbourne. The people skills learnt here were to stand him in good stead for the path God had chosen for him.

In 1896, and with the rank of Ensign, George was appointed as assistant to the editor of The War Cry. Here he was to meet Captain Minnie Rowell, and although he did not recognise it at the time, she would become his lifelong partner. On 21 June 1899, Commandant Herbert Booth conducted the wedding of Adjutant George Carpenter and Ensign Minnie Rowell in the City Temple in Bourke St, Melbourne. Various appointments followed, with a time as vice-principal at the new Federal Training Home in Melbourne. In 1911, following instructions from International Headquarters in London, Majors George and Minnie Carpenter sailed for London.

George Carpenter never forgot his humble beginnings and the transformation God had made in his life. Later in life, while territorial commander in Canada, he was to write to an old friend back in Australia: “We were none of us any better than we ought to have been in those days, and I am glad there came a time when I saw a higher and better way of life – a life with a purpose in it, and in which one can make a contribution to the moral and spiritual well-being of his day and generation.”

At International Headquarters, George was appointed to the editorial department and became news editor of The War Cry. Various editorial appointments brought him into close contact with then-Commissioner Bramwell Booth and, following the death of the Army’s founder and first General, William Booth, on 20 August 1912, George and Minnie Carpenter were valuable to him and even more so to the Army.

The Carpenter family now numbered five, with son George Raymond and daughters Renie and Stella. These were to become difficult days for George and Minnie Carpenter. 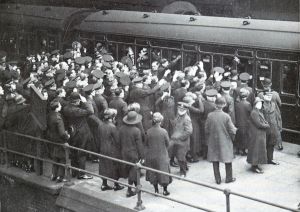 Despite an instruction that officers were not to attend the departure of the Carpenters from International Headquarters, a large contingent, including 14 commissioners, gathered at St Pancras Station in London to bid them farewell.

On 21 October 1921, they lost their daughter Renie. By the mid-1920s, there was growing unrest with General Bramwell Booth’s management of The Salvation Army and an anonymous pamphlet, The Blast of the Trumpet, criticising his leadership came to his attention. He demanded to know from George Carpenter, who was the author of the document, to which George replied: “General, it’s not so much who wrote it, but is there any truth to it?”

Aspects of the pamphlet were discussed, and the General asked for George Carpenter’s views. It became clear that Carpenter’s assessment was unacceptable to the General. A great deal of correspondence ensued between the General and George Carpenter with the result that, at the General’s bidding, the Chief of the Staff, Commissioner Edward J Higgins, despatched the Carpenters back to Australia, George to hold the position in the editorial department, which he had held some 20 years previously.

Lesser men than George Carpenter may well have had their spirit broken by such unjust treatment. On his last day at International Headquarters, during the daily midday prayer meeting, George responded to some of the consternation over his new appointment by saying: “I have long felt that a man’s opportunity is no bigger than the man.” They were words that were to prove not only the man’s character but also be prophetic for the days ahead.

Part two of this article will appear in next Friday’s Army Archives section.