You are here: Home › Army Archives › Big Hearted Bill A Casualty Of War

Big-hearted Bill a casualty of war Big-hearted Bill a casualty of war

Although many Australian Salvation Army chaplains and workers returned from war sick or injured, one never returned. It has often been said that Red Shield Defence Services personnel* have been “in the right place at the right time, every time” – through both world wars and subsequent conflicts, and during peacetime operations.

However, one of them, Bill Tibbs, was in the wrong place at one time during World War Two and lost his life as a result. In so doing, he became the only Red Shield worker to be killed on active service, although many others returned ill and injured.

Bill grew up in Armidale (NSW), and in 1930, at the age of 19, he became a Salvation Army officer. When war came, he was serving at Newcastle with his wife Norah. Leaving Norah and their two young children, he boarded the HMAT Aquitania troopship with the 9th Division to the Middle East.

Affectionately known as ‘Big-hearted Bill’, he was involved in the 241-day Siege of Tobruk in 1941. In a letter to his wife, he referred to the help he was able to give, often in simple but very welcome ways, such as giving the men ‘PKs’ [chewing gum]. “Didn’t the men just appreciate them! They help to keep their tongues moist,” he wrote.

Later in the same letter, he wrote: “You will be pleased to hear that in the eight days we have been in these parts we have served to the boys 256 gallons of hot coffee and 17 gallons of tea with biscuits, 2500 packets of PKs and comforts, including soap, shaving soap, face washers, toothpaste and brushes, mirrors and sewing kits, underpants and talc powder. The good name of the Army soars high as a result of it, but I pray that the name of our God will be honoured by it too. I am very jealous for His name and cause, especially as I see so few who care at all.” 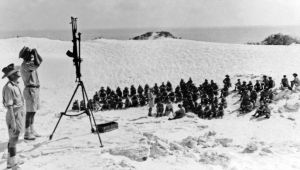 Australian soldiers at the ‘Sermon in the Sandhills’ commemoration service in Egypt, led by Bill Tibbs. In the foreground are two observers keeping a watch for enemy activity, alongside a tripod ‘Bren gun’.

Perhaps Bill’s most memorable act of service came in Egypt in November 1942, shortly after the Battle of El Alamein, during which the AIF ‘performed magnificently’ against the advancing Axis forces. Bill led a commemoration service, which became known as the ‘Sermon in the Sandhills’.

The sermon was preached amid the distant sound of gunfire and in a sunken valley protected from enemy aircraft by anti-aircraft posts mounted on the surrounding sandhills.

After his Middle East service, Bill spent some time in Papua New Guinea. In December 1943, he was recalled by The Salvation Army to take charge of Sydney Congress Hall Corps. Obeying orders like a good soldier, his itinerary included stopovers in Townsville and Brisbane.

At Townsville, he was given permission to travel into town to pick up a new uniform. On his return to the airport, he learned that the plane had left without him and he had to wait for another. On 19 December 1943, his plane ran into difficulties and crashed at Canal Creek, 50km north of Rockhampton, killing all 31 on board. Bill Tibbs is buried in Rockhampton War Cemetery, Plot A, Row B, Grave 3.

His obituary is told simply in the words of his mate, Albert Moore: “I had the greatest admiration for his qualities as a man, soldier and friend, and last but not least, as a Christian.”

An edited excerpt from an article by George Hazell that appeared in The Salvation Army ‘Hallelujah’ magazine in 2008.