You are here: Home › Army Archives › Bush Baked Scones On The Kokoda Track

Bush-baked scones on the Kokoda Track 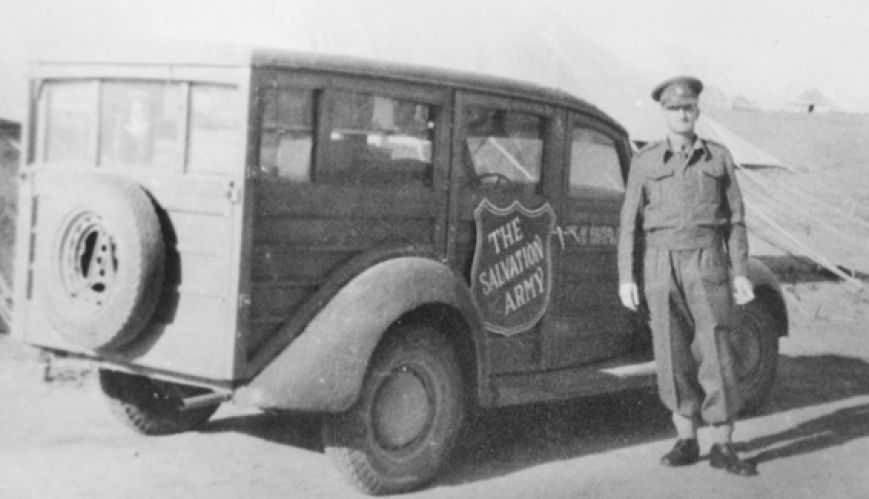 Bush-baked scones on the Kokoda Track

Salvation Army Red Shield Representative Major Albert Moore standing next to his Ford ‘Woody’ station wagon in the Middle East during World War Two. He later became a chaplain to the 2/14th and 2/16th Battalions in Papua New Guinea, who fought on the Kokoda Track. Photo courtesy of the Australian War Memorial.

This year marks the 80th anniversary of the World War Two battle of the Kokoda campaign in Papua New Guinea. Army Archives opens the vault on some Salvation Army memories of the battle that saved Australia.

Papua New Guinea was a strategic prize that the Japanese sought to secure. If the Japanese Army won Port Moresby, it could launch direct attacks against Australia. The stakes were high, and both sides were desperate – the ANZACs to defend the city, the Japanese to take it. With its port well protected by the allied forces, the Japanese decided to attack overland, using the Kokoda Track, which snaked through the Owen Stanley Ranges.

The Kokoda Track today is a major tourist trail attracting thousands of people every year, yet it remains a formidable undertaking that tests trekkers’ fitness and tenacity. Add to that the uncertainty and mortal danger of a war zone, and one starts to get a glimpse of the hardships faced by the ANZACs and those supporting them. 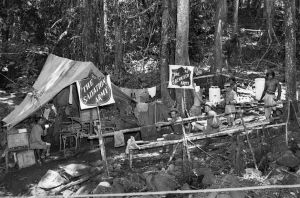 One of The Salvation Army ‘Hop In’ tents set up for the Australian troops on the Kokoda Track.

Into this nightmare went Red Shield Defence Service personnel and military chaplains. Using the services of local porters, their ‘Hop In’ coffee points were highly mobile, enabling them to keep up with, and sometimes outpace, the troops. A permanent plaque erected near the Goldie River Barracks on the track reads: “Captain John McCabe, taking with him only what he could carry, became the only philanthropic rep to traverse the entire length of the Kokoda Track and rendered valuable assistance with the regimental Aid Post.”

Red Shield Representative Major Albert Moore and his assistant, Jock Inglis, spent weeks at a time on the Kokoda Track supporting the troops, only leaving to secure more supplies. Jock seemed to have a knack for sourcing the impossible. “Jock was a tremendous ‘scrounger’ with a fantastic ability to both get things and get things done,” Major Moore wrote about Jock in his diary. “These hard-to-come-by delicacies delighted the exhausted troops who sometimes crawled, sometimes collapsed into the Hop In area.”

According to the Australian War Memorial account of Major Moore’s ministry, one of his most-loved treats was bush-baked scones. The ingredients were pretty basic but still hard to acquire, and yet Major Moore managed to produce hundreds of his scones from the oven he had made from a biscuit tin buried in the ground. Despite on occasion having been baked from flour that “came alive” with weevils, the scones and jam tarts were greatly appreciated by men who had seen nothing but hard rations – bully beef and hard “dog biscuits” – for weeks. Major Moore’s philosophy was that “when you are hungry, sour grapes can taste sweet”.

When the war ended, The Salvation Army’s Red Shield representatives and military chaplains arrived back at headquarters in Australia with a new invasion plan. The people of Papua New Guinea, particularly the ‘Fuzzy Wuzzy Angels’, held a special place in their hearts. While some moves had been made before the war to establish The Salvation Army in Papua New Guinea, it could be said that World War Two and the momentous months of battle on the Kokoda Track set the stage for that peaceful ‘invasion’ to take place in 1956.