You are here: Home › Army Archives › Evangelist Of The Goldfields Part 2

Evangelist of the Goldfields - Part 2

Evangelist of the Goldfields - Part 2

While Major William Randall was part of the duo who pioneered the Army’s work in Kalgoorlie-Boulder, the Spirit continued to move as the corps flourished over the coming years. In the meantime, Major Randall and his family also experienced blessings and hardship. (clockwise from left) Twin Salvationists Sarah Jane Bunnage and John William Bunnage – husband of Dulcie May Randall; Kalgoorlie bandsman Jack Kroenert in 1934; the original Kalgoorlie-Boulder Army hall on Brookman Street*; Major Schofield and his family; the Kalgoorlie-Boulder Senior Staff Band in 1903.

Last week, we heard about William Schofield Randall and how he pioneered the remote Kalgoorlie-Boulder Corps in 1895, ministering to miners in the Goldfields of Western Australia. This week, we learn more about the life and calling of this incredible Salvationist. 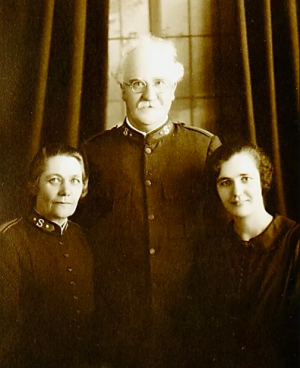 Major William Schofield Randall, pictured in his later years with his wife Major Margaret Randall and daughter Dulcie May. The couple was appointed to service in every Australian state during their officership. Major Schofield was promoted to glory in 1944 at the age of 73.

William Randall was born in Golden Square, Bendigo, on 20 November 1871, the third child of Henry and Maria Randall [nee Lees]. He started training as a Salvation Army officer at 23 after serving a seven-year apprenticeship as an engineer.

He married Margaret Sangster in Adelaide on 16 April 1907, and they served as Salvation Army officers in all states of Australia. According to the War Cry, Mrs Margaret Randall was from a well-known Army family living in Broken Hill.

Much of William’s work during his early years in the Army was pioneering – a philosophy of the Salvos that endeavoured to reach out to potential converts in remote locations. He went to many outback districts and found the people eager to listen to his message.

William spent about five years on the Western Australia goldfields (1895-99) before being appointed to serve in 15 corps over the next eight years, including corps such as Broken Hill Central, South Broken Hill, Petersburg [Peterborough], Hope Valley, Mount Barker and Clarendon.

In 1909, William, now 38, and Margaret, 30, were appointed to Eaglehawk on the goldfields in Victoria. Two years later, they were on the move again, this time across the Bass Strait to Devonport in northern Tasmania, where their daughter, Dulcie May, was born on 30 March 1911. Burnie was their next appointment in 1912, but other issues soon intervened. Due to Margaret’s poor health, the family moved to Junee in NSW Central West. It was thought that the warm, dry air of this outback town would improve her condition.

Life for a Salvation Army officer was one of selfless duty, and the Randalls were no exception. They were true believers in what they were doing and were not at all concerned with the constant upheaval in their lives. Wherever Territorial Headquarters saw the need to assign them, they dutifully accepted.

They thrived upon their calling to the glory of God. During the war years of 1914-1917, William and Margaret were assigned to inner-suburban Melbourne before returning to Tasmania, where they served as the Hobart Corps Officers. They were there less than a year when William, now 46, was seriously injured while riding his bicycle. The fork suddenly broke, sending him crashing face-first onto the roadway.

He was admitted to Hobart General Hospital in serious condition on Friday 12 October 1917. He had suffered a compound fracture of the lower jaw, part of which was missing. Four teeth had been knocked out, and his lower lip was badly cut. His jaw was wired and his lip was stitched.

Days later, when he was discharged from the hospital, doctors were sceptical that he would make a full recovery. However, when he returned a few months later for the surgeon to assess what further medical treatment was required for his badly fractured jaw, the news could not have been better. William’s injury had healed remarkably well, beyond the surgeon’s expectations, and more surgery was unnecessary. To his great relief, he was free to resume his work, which now also included serving as a People’s Palace Officer.

His next appointment in 1928 was to Rockhampton in Queensland. In 1932, at the age of 60, he was sent to Bathurst (NSW), and, in 1933, he was posted to Sydney in the role of chancellor of the Sydney West Division. The next stop was Brisbane, where he was appointed to the Brisbane People’s Palace as sub-manager in 1934. Two years later, he returned to Sydney to serve in the suburb of Campsie.

Both joy and sadness would impact the family’s lives while resident in Campsie. In 1938, William and Margaret’s daughter Dulcie May married John William Bunnage in a ceremony at The Salvation Army citadel. Then, in 1939, William lost his life partner when Margaret died at 60. Five years after his wife’s passing, William died at 73.

William worked for The Salvation Army dutifully for 49 years and travelled thousands of miles across Australia. With his wife and daughter, they formed a team devoted to helping those in need and gathering respect and friendship wherever they served.

This article was republished with permission from Moya Sharp and the Outback Family History Blog, with family photos provided in conjunction with Brian Randall. Read it here.

* Photo of the George Street Barracks courtesy of the Western Mail, 16 December 1898.