You are here: Home › Army Archives › Evolution Of A Spiritual Army

Evolution of a spiritual army Evolution of a spiritual army

William Booth (seated at front) with his Mission staff in 1877, the year before his movement officially became known as The Salvation Army.

When William and Catherine Booth commenced their ministry, they had no thought of instigating a new religious movement, let alone one constructed along military lines.

Its arrival was not the result of some instantaneous “Boothian” thought bubble, but rather that of gradual evolution, under the direction of the Holy Spirit, from an evangelical mission organisation to an autocratic, military-based spiritual army.

After spending many years as an itinerant preacher and a Methodist minister, William was invited in July 1865 to take over a mission operating in a dilapidated tent in one of the poorest parts of London, the East End. The mission led by William had various names before it became The Salvation Army, but for simplicity, we shall refer to it as the Mission.

Neither William nor Catherine seemed to have entertained any idea of setting up a new religious organisation but instead saw their role as simply missional; to bring the lost to an experience of salvation. However, one of the major problems confronting the fledgling Mission was “the need to keep converts from falling away before they were established in the faith”. As recorded in The History of The Salvation Army – Vol 1 (p65), “William Booth had not reached the conclusion that it would be necessary to establish any new body. He regarded the purpose of the Mission as being, in the main, to form a link between the unchurched masses and the Churches.”

The Mission at this time was making an impact. The Wesleyan Times (20 August 1865) reported that: “The Rev. William Booth had held a series of special meetings in the East End of London where ‘Hundreds of working men and numbers of persons who never enter a place of worship have listened night after night to appeal of this devoted servant of God, and many conversions had taken place’.” 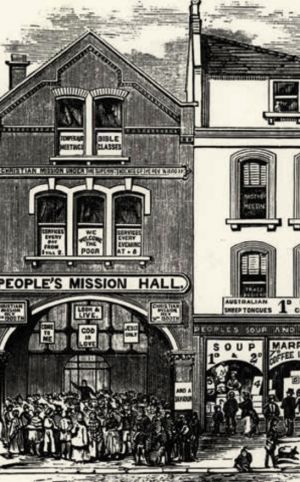 An artist’s impression of William Booth preaching to a packed forecourt of the People’s Mission Hall in the early 1870s.

Despite the Booths’ best efforts, integration of their new converts into the established churches finally proved all but impossible. In the first instance, the new converts felt secure in the Mission family and refused to go. Secondly, most established churches did not want these new converts who, more often than not, were from the lower strata of society. Thirdly, the Mission needed some of them to assist in its own ministry. The Mission had a simple yet effective strategy: 1. Insistence on a definite confession of faith in Christ; 2. The pastoral care of and teaching of new converts; and 3. Training them to bring others to the point of deciding for Christ.

By the late 1860s, the Mission was becoming well established and successful. James Dowdle became the first paid, full-time evangelist with the Mission, extending its ministry outside the East End of London. The purchase of a large market saw the Mission avail itself of its first building, and work on the building was completed by early 1870 on what was termed the ‘People’s Mission Hall’.

Administration of the Mission was along the lines of the Methodist form of government with its regular conferences, which William felt spent far too much time in discussion. Often meetings would go on for three to four hours without any worthwhile decisions being made. A delegation to William in 1876 summed up the frustration being felt by Mission workers: “We did not give ourselves to form a little church as an appendix to Methodism. We gave ourselves to you to be guided by you.”

Whether consciously or unconsciously, it would appear that the Mission was evolving into something more that had first been envisaged. It may well be this evolution was not so much planned as directed by the Holy Spirit, whose guidance William and Catherine Booth had always sought. Having already realised that their new converts needed pastoral care and other churches were either unwilling or unable to meet such a need, the Booths sought some sort of structural organisation for the Mission.

At a Conference Committee held in early 1877, a new form of government was discussed. In his later writings, William recalled: “Some of the evangelists whom I had engaged to assist me rose up and wanted to convert our Mission into a regular church.” William called them together and said: “My comrades, the formation of another church is not my aim. There are plenty of churches. I want to make an army.” Whether or not William foresaw at that point an organisation such as The Salvation Army, we may never know. What we do know is that from that point on, the Mission began to evolve into a militaristic organisation.

Mission members, such as Elijah Cadman, began to use military terminology. In the autumn of 1877, Cadman was stationed in Whitby [a seaside town in northern England] and set about advertising a campaign led by “Captain Cadman from London, declaring War in Whitby, appealing for 2000 men and women to join the Hallelujah Army. Mr Booth, the General of the Hallelujah Army, is coming to Whitby to review the troops.”

By 1878, the Mission was an ‘army’ in all but name. Booth, known as the General Superintendent, was often referred to as ‘The General’, and many of his workers adopted military terminology. A printer’s proof for the mission’s report of 1878 referred to the mission as “a volunteer army”. While there is conjecture about what actually took place, the official history of The Salvation Army records that William’s son Bramwell objected to the phrase “volunteer army”, declaring: “We are not volunteers, for we feel we must do what we do, and we are always on duty.” Without a further word, Booth is said to have picked up a pen and struck out the word “volunteer” and wrote “salvation”.

Although it would take some time for the use of military terms and organisation to be implemented, the evolution had brought the Mission from a derelict tent on an old burial ground to the commencement of The Salvation Army. On 17 May 1879, while addressing a meeting in Newcastle, north England, Catherine Booth declared: “We are an Army, we grew into one, and then we found it out and called ourselves one.”