You are here: Home › Army Archives › First Officer Gets Lesson In The Lingo On Arrival In Adelaide

First officer gets lesson in the lingo on arrival in Adelaide First officer gets lesson in the lingo on arrival in Adelaide

A composite image with a photograph of Captain Thomas and Adelaide Sutherland overlaid on a line drawing of James Hooker’s hotel with the Army’s hall beside it in Morphett Street, Adelaide. (Photos and illustration supplied by The Salvation Army Museum)

Dealing with a typical Aussie’s lingo and use of slang is something people born and bred in Australia are flat out (like a lizard drinking) fathoming, so spare a thought for people totally new to the country. The commission General William Booth signed to install Captain Thomas Sutherland as the corps officer at Adelaide 1 Corps. (Commission on display at The Salvation Army Museum in Melbourne).

Couple that with turns of phrase used from a person’s country of origin and there is a recipe for confusion.

That is precisely the situation that confronted fresh-faced Captain Thomas Sutherland when he arrived to become the first officer of the Adelaide 1 Corps way back in 1881 – 140 years ago (on 17 February) – which is Adelaide Congress Hall today (ACH).

History records that Thomas wrote that a small band of soldiers were waiting on the wharf at Port Adelaide for him and his wife, Adelaide, so, the moment they arrived in the South Australian capital they “commenced at once” their ministry: “The ‘Blood and Fire banner’ was soon unfurled and off we went singing.”

ACH historian Roger Allen said 68 converts and friends of the Army marched from the heart of the city the seven miles to Port Adelaide (then Port Misery) to welcome the Sutherlands as they disembarked the S.S. Aconcagua and then marched their new corps officers back to the city for a meeting.

Roger said the congregation was glad of their arrival as they had been petitioning General Booth for some time to send an officer to make the corps official.

Thomas wrote that, after the meeting, a bloke took him by the hand and “asked me if I would ‘shout’”.

“Being a new chum, I did not understand his way of shouting.”

Thomas quickly learned that the phrase meant to pay for the fellow’s drink in the pub – or “a public house” as Thomas wrote: “Praise God, my way of shouting is in apposition to the publican’s. I shout them out of such places and invite them to drink at the fountain of life.”

So, old chum, that was an instant introduction to life and lingo as an Aussie! 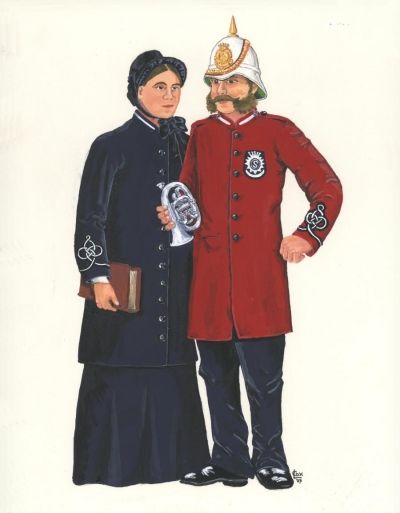 Adelaide and Thomas Sutherland in an artist’s impression of the uniforms they wore when they arrived in Adelaide. The pocket cornet Thomas brought is on display at The Salvation Army Museum in Melbourne.

The movement’s early history in Australia continues to be debated as Army historians uncover more information and documentation about its early days, but it is known that Thomas and Adelaide arrived on 17 February 1881 to establish the Adelaide 1 Corps, known then as ‘The Royal Blood-Washed’.

Army co-founder General William Booth signed the commission of Thomas Sutherland’s appointment, dated 5 January 1881, believing him to be a “fit and proper person to undertake the duties and responsibilities of that appointment” and “for the glory of God and the advancement of The Salvation Army”.

He charged Thomas to “faithfully, fearlessly and with a whole mind carry out the Orders and Regulations of The Salvation Army now and in force at any time hereafter to be issued”.

With that said, under the seal of the Army, he commissioned Thomas as a captain and as the Adelaide I corps officer.

When the Sutherlands arrived, it was the first time people had seen Army uniforms. Early reports indicate Thomas wore an ex-British Army scarlet jacket, navy-blue trousers and a spike-topped white helmet, while Adelaide wore a princess robe-style dress with a small bonnet. In their luggage, some say, were another dozen uniforms for the soldiers of the corps.

About 10 weeks later, the corps settled into its first permanent home – a hall in Morphett Street, which had been specially built by a James Hooker, an early convert, who leased it to the Army. A line drawing depicts the corps building being dwarfed by James Hooker’s Henry’s Lion Temperance Hotel.

It was not all smooth sailing in the early years as politician Alexander Hay is recorded as having said in Parliament in 1884 that “Salvationists should be required to conduct themselves like Christians and not as though they were rowdy drunken people.”

It is generally accepted that the Army’s first ‘unofficial’ service in Australia – and therefore the early heartbeat of a structured corps – as having been an outdoor evangelistic meeting in Adelaide’s Botanic Park on 5 September 1880, which was led by Englishmen Edward Saunders and John Gore famously from the back of a cart.

It is believed the Army initially held indoor services, too, in venues including Adelaide’s Labour League Hall but, with the arrival of the Sutherlands, a building in Light Square was rented for its “barracks”.

Roger said nicknames for corps were prominent in the early years of the Army. Adelaide 1 was known as ‘The Royal Blood-Washed’. It merged with the nearby Adelaide 2 Corps, which was then called ‘The Star in the East’, in 1899 to become Adelaide Citadel. In 1925, the name was changed to what it is today – ACH, with the nickname City Salvos!