You are here: Home › Army Archives › From Humble Beginnings 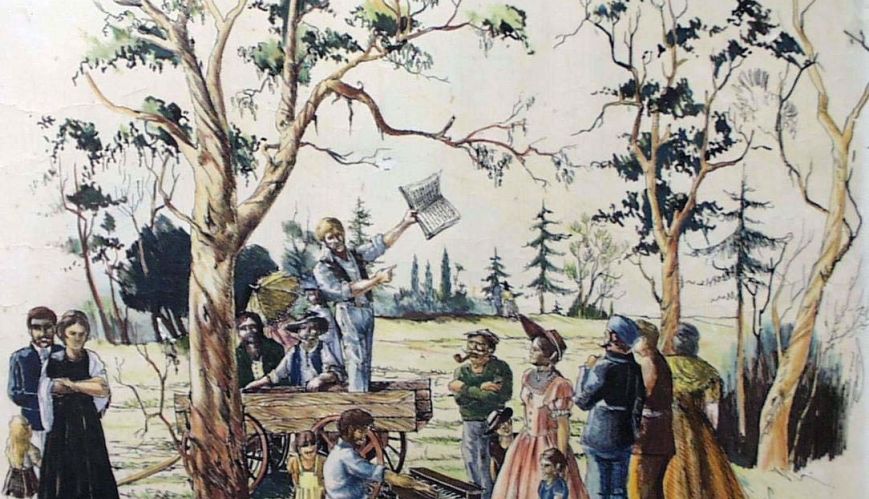 A crayon-coloured pen and ink drawing depicting the open-air meeting conducted by Gore and Saunders in the Botanic Park, Adelaide, 1880.

The Salvation Army’s typically Australian-style commencement, under a gum tree in a park, was epitomised by a characteristic act that was to symbolise the ethos of organisation in our country.

Standing on the tail board of a horse-drawn cart, Salvationist John Gore issued an invitation: “If there is any man here who hasn’t had a meal today, let him come home with me.” With a strong social conscience, The Salvation Army in Australia was born.

Gore and fellow pioneer Edward Saunders had been converts of The Salvation Army in their native England and had migrated to Australia, settling in the city of Adelaide. While attending a temperance meeting in the Pirie St Wesleyan Church during May 1880, they discovered their common Army connections and departed that very evening to hold an open-air meeting at 8pm at Light Square, an infamous part of the city.

Although Adelaide was ringed by churches, Gore and Saunders felt there was a need for an organisation like The Salvation Army to minister to those whom the churches overlooked.

Both men started writing to William Booth, the founder of the Army, asking for officers to commence the work in Australia. Saunders wrote that he was willing to pay the fare of any brother or sister who Booth thought competent to come, and said he had already encountered 12-15 persons who had been soldiers of The Salvation Army in England.

Gore and Saunders continued to conduct open-air meetings and after receiving an encouraging response from Bramwell Booth, the Army's Chief of the Staff, decided the time had come for them to officially launch The Salvation Army in Australia. Following a half-night of prayer in the dining room of the Saunders home on 31 August 1880, they nominated 5 September 1880 as the date of the first official meeting of The Salvation Army.

A notice, placed in the South Australian Advertiser, promoted a meeting in the Labour League Hall in Hindley St, Adelaide, on Sunday 5 September 1880, at 7pm. Prior to meeting, in true Salvation Army style, they went first of all to the place where people of Adelaide congregated – Adelaide Botanic Park – and declared the good news of God’s love and salvation under a red river gum.

Standing on the tail board of the horse-drawn cart, Gore commenced the meeting with the words of the song, We’re Travelling Home to Heaven Above. It is unclear whether anyone took up his invitation to a home-cooked meal, but what is clear is that on that day, The Salvation Army in Australia was born.

Gore and Saunders continued to further expand their fledgling Salvation Army. In hired halls, open-air meetings, and even in a stable at the Saunders home, they continued to win new converts and develop a company of committed Salvationists.

Although other Salvationists from England continued to carry out Salvation Army ministry in Sydney and Brisbane, the work in Adelaide seemed the most effective and it was General William Booth’s decision, in January 1881, to dispatch Captain and Mrs Thomas Sutherland to be the first officers in Australia.

From these humble beginnings under an Adelaide gum tree, The Salvation Army spread its roots throughout Australia and the entire Western South Pacific, flourishing as one of the most unique and adaptable churches the region had seen.