The mysterious Adjutant Emily Jackson has been recovered from history. This photo depicts her in the AANS Indian uniform. Perhaps the real mystery is, ‘who is the unknown British Military officer she is with…?!’

While researching and writing about a unique band of Salvation Army officer women who served in the Australian Army Nursing Service (AANS) earlier last century, Dennis Garland hit a stumbling block. Information about one of the nurses – Adjutant Emily Jackson – seemed to disappear from the history books after she resigned her commission. 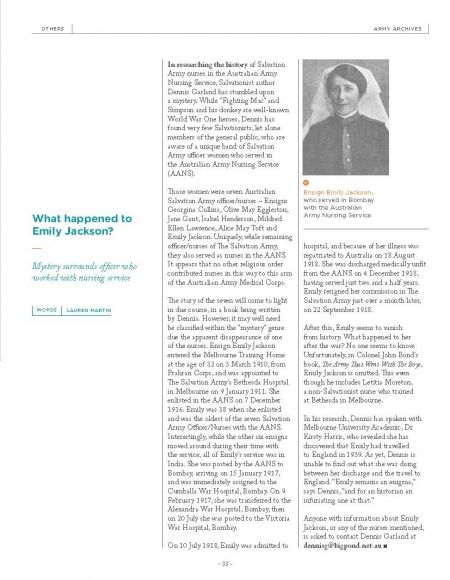 He contacted Others magazine and asked if a call for information could be made, and the February issue this year devoted its Army Archives column (pictured right) to the story, with the headline “What happened to Emily Jackson?”.

“As a result of the article I had exciting news,” Dennis says. “The family contacted me providing information and photos. Emily was an important member of the Jackson family, remembered with love and pride. She wasn't lost at all!”

On her return from service with the AANS in India in 1918, Emily (pictured below, right) resigned her Commission as an Officer in The Salvation Army and went on to work as a Sister in the Australian Repatriation Hospital System. According to Emily's family, Emily travelled to England in 1939. She went to finalise some family business and returned to Australia on the last regular passenger ship to arrive in Australia from England prior to World War Two. “It must have been an exciting trip home,” says Dennis, “Apparently, the ship’s captain was worried about the German U-boat threat!” “As a historian I was excited to receive all of this information,” he says. “It enables me to complete my history with the confidence that I can provide a fuller picture of these remarkable officer/nurses. I was not willing to complete my work unless I could provide a more complete history of each of the nurses involved.”

Dennis is now turning his attention to another one of the nurses – Adjutant Jane Gant. “Jane's history with the Army is somewhat unique,” he says. “Jane entered the Melbourne Officers Training Home from Burwood Corps in Sydney. Interestingly, she wasn't a soldier when she entered the Army’s Training home for officers.” He has discovered some contradictory information about Jane and would appreciate any reader to get in touch if they know anything about her.

The writing continues. Dennis and his wife will visit England this year and include The Salvation Army Heritage Centre and Imperial War Museum in their itinerary for further research.

Anyone with information about any of the nurses mentioned is urged to contact Dennis at dennisg@bigpond.net.au