The stories of Mary Anderson's work were legendary in the early 1900s.

Life often takes an unexpected direction when you serve God. That was certainly the case for many pioneering Salvation Army women, whose work a century ago among the disadvantaged, poverty-stricken and marginalised was trailblazing.

Mary Anderson was commissioned as a Salvation Army officer in 1901, but her life’s work really began 12 years later when she was appointed to the Melbourne Police Court. Her brief was to assist women and girls in distress.

As well as possessing a deep concern for the poor and disadvantaged, Mary was described as having a spontaneous sense of humour and great tenacity – two attributes that served her well during her decades of service in the court system.

The stories of her work were legendary at the time. Court officers and the police force placed great reliance on her judgement and many women were kept out of prison by her intercession and acceptance of responsibility for them. From 1917, she also oversaw Salvation Army women’s shelters, helping to assist and rehabilitate many women and girls who came before the magistrates.

‘The Little Major’, as she was affectionately known, was a highly-respected Justice of the Peace, given a Life-Governorship of the Royal Melbourne Hospital, invited to become an Associate Member of the National Council of Women, appointed a life member of the Honorary Justices Association, and was the first vice-president of the Probation Officers Association of Victoria. In 1943, she became the first Australian woman to be awarded The Salvation Army’s highest honour, the Order of the Founder.

Mary retired in 1935, but continued her police work for another 11 years. She was honoured in the Queen’s Birthday Honours of 1956, receiving her MBE from the Governor of Victoria. She died later that year; the courts closed on the morning of her funeral, with many judges and magistrates attending the service at The Salvation Army Melbourne City Temple.

The Salvation Army’s connection with the police continued in the early 20th century when, around 1910, Victoria’s police commissioner recognised the need to recruit women to the force. He asked pioneering Melbourne police courts officer Frances Gillam, a Salvo officer, to resign from The Salvation Army to “become the prototype police woman and to train others”. 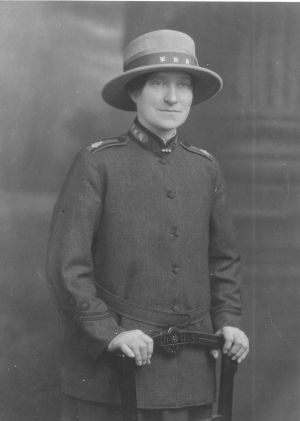 Captain Gillam, however, remained true to her calling to The Salvation Army, but was given permission by Commissioner James Hay to act in an advisory role to Victoria Police.

Salvation Army women, however, were destined to have further influence on the police force. In August 1917, Victorian Police chief secretary Mr Donald McLeod announced that policewomen would be appointed “for the better protection of young women and girls”.

Addressing the Legislative Assembly, he said: “I have been in communication with a number of societies –The Salvation Army and others – who have had women in what might be described as police work in different parts of the state and I have asked them to make recommendations. It will be necessary to employ women who know something about the duties they will be called upon to fulfil.”

Victoria’s first two policewomen, Madge Connor and Salvation Army officer Elizabeth Beers, were sworn in on 28 July 1917. As ‘police agents’, they were not put into police uniform but had a police badge behind their lapel to show when required and a detective’s warrant card ‘empowering them to extract information’.

Elizabeth was replaced in June 1918 by Ellen (Nell) Frances Davidson, described in police files as a ‘staunch member of The Salvation Army’. Nell gained the distinction of successfully completing Victoria’s first policewomen’s exams and being appointed a ‘woman constable’.

She retired in 1940, having achieved the rank of First Constable in 1934. She was renowned for her work in the slums of Melbourne and, with colleague Madge Connor, was highly commended for her work on the 1921 Gun Alley murder case.