Home for community now home in the community: The Salvation Army’s old Leichhardt Corps building given a new lease on life.

The Salvation Army’s former Leichhardt Corps property in Sydney’s inner west could be about to change hands for the second time in its history. 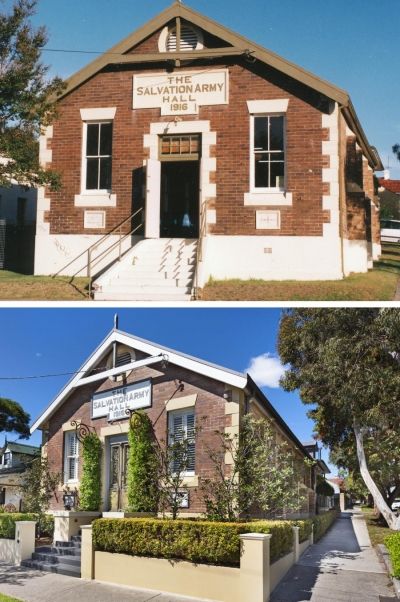 The Salvation Army sold its Leichhardt Corps building in Sydney to a private owner who has reimagined it into a modern, four-bedroom home.

The Army sold the building in Carlisle Street to its current owners in the mid-1990s. These owners have since transformed it from a place of worship into an upmarket four-bedroom home.

Real estate agent Ben Southwell said the owners had not planned for it to be their family home as they were looking to live in Sydney’s eastern suburbs, so originally leased the building to a photographer and later an antique dealer.

Ben said their plans subsequently changed around the time the tenants in the old Army hall vacated.

“The owners sat on the front step [of the old Army hall] one weekend and said to each other: ‘What if we made this our home?’” Ben said. “From this day forward, the rest is history. They lovingly restored the home hall to preserve the integrity and memory of the building while making some comfortable additions to the rear allowing for more sleeping options.”

Ben said the home has attracted significant interest since coming back onto the market.

The shell of the 1916 red-brick building remains untouched. It has a 200-year-old Argentinian front door, cathedral ceilings, unique fixtures, engineered flooring and a relaxing garden at the back.

Ben said the owners wanted to ensure the hall kept its character, having wanted to “do something sympathetic to the original design”.

It has been converted into an open-plan, four-bedroom house and retains the original Army signage and foundation stone and ornate ceilings. It is listed for sale around $4 million.

The kitchen of the renovated Leichhardt Corps building (left) and Captain Peter Ridley (right) takes part in the final service.

Don Callaghan, Assistant Manager at The Salvation Army Australia Museum, said that, in its later days, Leichhardt had been an outpost of Petersham Corps. Petersham recently became part of a merger between it, Dulwich Hill, Earlwood and Glebe corps to give birth to Sydney Inner West Corps.

The then Australia Eastern Territory Historical Society newsletter, Under The Tricolour, suggested the original Leichhardt Corps building, which was opened in 1899, was in nearby Jarrett Street and possibly the first citadel in Sydney.

The newsletter recorded in its January-March issue of 2012 that the Leichhardt Corps “passed into history” in 1975 when it became the Petersham Corps outpost. Before then, though, the two corps had “faced each other across Parramatta Road” in their early history and there have been suggestions they had merged for a short time.

“Meanwhile, the Army opened a corps across Parramatta Road at Petersham” on 5 May 1890, the newsletter said, which was recorded in The War Cry of 24 May 1890: “God enabled us to take and conquer another fort.”

Parramatta Road serves as the boundary between Petersham and Leichhardt councils.

A newspaper report on the opening of the barracks at Petersham suggested the two corps merged on the new site but was called Leichhardt yet the Leichhardt Corps history book recorded the opening of the Carlisle Street citadel, on the corner of Cromwell Street, took place on 6 September 1903, allowing Petersham to become a corps in its own right. The first official mention of Petersham Corps appeared in The War Cry on 5 September 1903.

The Petersham history book suggested 18 soldiers transferred from its roll to the ‘new’ Leichhardt Corps.

In 1916, the corps opened a new ‘James Hay-style’ senior hall – which is the building now for sale – and the original barracks became the Young People’s (YP) hall.