Groundbreaking Army production was not for the faint-hearted Groundbreaking Army production was not for the faint-hearted

An opening slide of The Salvation Army production Soldiers of the Cross, which premiered at Melbourne Town Hall on 13 September 1900.

Soldiers of the Cross – billed as the ‘Commandant’s soul-thrilling lecture’ – premiered at the Melbourne Town Hall on 13 September 1900 to an audience of more than 2000. Soldiers of the Cross was a mix of film, lantern slides, music and oratory.

Often erroneously referred to as the world’s first feature film, Soldiers of the Cross was, in fact, an ingenious mix of motion-picture film, lantern slides, music and oratory, with the film segments only making up less than a quarter of the whole presentation. This lengthy religious epic was, however, an extraordinary achievement for its time, with its film segments arguably being some of the earliest narrative drama produced, and certainly being the first local films with costumed actors on elaborate sets.

The cast of Soldiers of the Cross were Salvation Army officers and cadets. The large film sets were erected at the Murrumbeena Girls Home, using the tennis court fencing to support the large, painted canvas backdrops. Smaller sets were set up in the Life Model Studio at 69 Bourke Street, and some scenes were shot on location, such as the Richmond Baths where Calepodis met his watery fate.

The result was 19 motion-picture film segments of no more than 90 seconds and some 240 hand-coloured, glass-lantern slides. Music was provided by a 20-piece orchestra and small choir presenting typical Salvation Army choruses and songs, and selections from the Masses of Mozart. It was a startling, stirring, and often brutal portrayal of the sufferings of the early Christian martyrs.

The premiere of Soldiers of the Cross lasted two and a quarter hours. The next day the Argus newspaper reported: “Opening with the last days of Christ, Commandant Booth dealt with the lives of the disciples. Bold as the lecture was in conception, the illustrations were even more daring.” The Age printed: “It is a thrilling, novel and instructive lecture.” The War Cry stated: “It was a knock-out. Possibly ‘knock-out’ is slang, but it is rapidly becoming good English, and we like to be ahead of the times.” 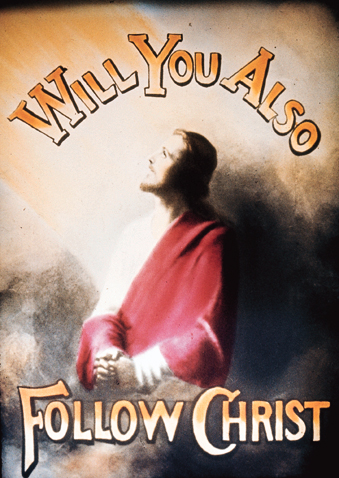 The final slide of The Salvation Army's ‘Soldiers of the Cross’, which premiered in 1900 in Melbourne.

Soldiers of the Cross commenced with an opening song and prayer. Commandant Booth then came on stage and explained the purpose of the lecture was “not an entertainment” but an endeavour to accurately depict the scenes of suffering and sorrow experienced by the early Christians. He dedicated the lecture to the recruiting of 200 cadets for the new Officer Training College in Victoria Parade.

“The house lights went down,” reported The War Cry. “The audience were hushed into breathless silence as the immense pictures were thrown upon the canvas. The Commandant’s voice alone broke the stillness, thrilling the enthralled audience with burning words, forming an eloquent and beautiful tribute to the heroic deeds of the saints whose pictorial reproduction riveted every eye.”

Coloured lantern slides depicting the arrest and trial of Stephen filled the screen, and as the sequence faded, brilliant black and white moving images continued with the stoning of the first Christian martyr. The illustrated lecture then proceeded through segments depicting ancient Rome, the martyrdom of Peter, the life of Paul, the massacre of the Christians in the Catacombs, the deaths of Polycarp and Calepodius, the slaughter of Christians in the Colosseum, and the sacrifice of Perpetua. Soldiers of the Cross finished with the screen filled by a coloured lantern slide asking: “Will you also follow Christ?”

The world was a less sophisticated place in the year 1900; well before instantaneous global communications, modern mass media and computer-generated graphics. Soldiers of the Cross affected audiences in a way not understandable by modern audiences so used to images of violence on television screens and in cinema. The projected images in Soldiers of the Cross were so stark and graphic for the time that The War Cry reported that “members of the audiences fainted”.

Herbert Booth and Joseph Perry’s epic multi-media production was unashamedly for propaganda purposes. Herbert said: “I am anxious that, as a result of all the labour, ingenuity and anxiety, which have been followed by prayerful dedication to the cause of Jesus, hundreds will be drawn to the cause of Jesus.”

Herbert reiterated that his lecture was “not an entertainment”, but here he failed; Soldiers of the Cross was definitely entertaining – and it was a real ‘knock-out.’