You are here: Home › Army Archives › Remarkable Women Who Shaped Our History

Remarkable women who shaped our history 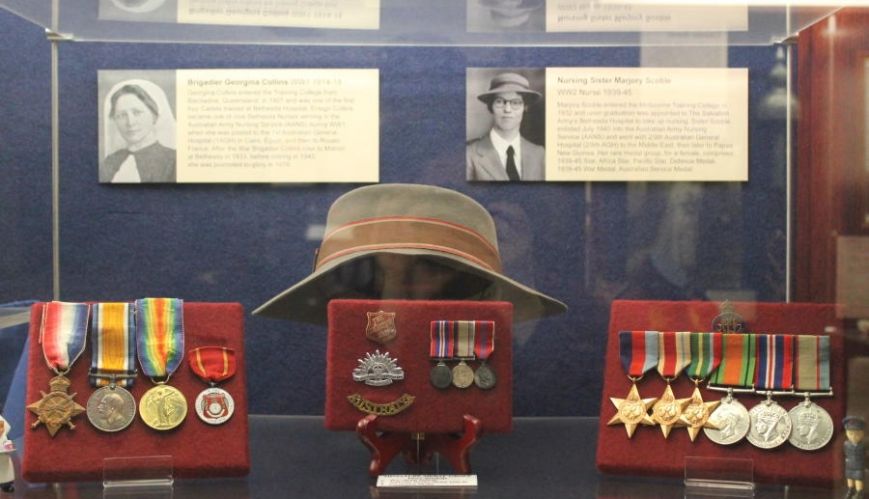 Remarkable women who shaped our history

One of the displays honouring Australian Salvation Army women at the Salvos’ Australia Museum in Melbourne.

International Women’s Day is celebrated every year on 8 March, yet women are honoured every day of the year at The Salvation Army Australia Museum. Taking a stroll around the Melbourne museum exposes you to the inspiring stories of a handful of trailblazers.

Sitting discreetly among shelves of famed Salvation Army hats, General Burrows’ bonnet evokes the same humility as its former owner. She requested that her bonnet should be given to the museum after she died, and it was duly delivered to Australia Museum Manager Lindsay Cox six weeks after she was promoted to glory.

An array of medals honours the role of two Salvationist women who played pivotal roles in the Australian Army Nursing Service. The emblem of King George V is displayed on one such medal, given to Brigadier Georgina Collins, one of nine Australian nurses from The Salvation Army Bethesda Hospital in Melbourne who served during World War One in Egypt and France.

Major Anderson was a legendary figure at the Melbourne Police Courts in the first half of last century. Appointed in 1913 to support women and girls in distress, she spent the next three decades of her life interceding for them at the courts. She also oversaw Salvation Army women’s shelters from 1917. The museum displays her Order of the Founder medal, which she received in 1943, and her MBE, awarded by the Governor of Victoria, which Major Anderson received just months before her promotion to glory in 1956.

Adjutant Murray served as the Assistant Secretary of the Naval and Military League in the Boer War from 1899-1906, risking her life to support troops on the front lines. Her handbook and a memorial china plate pays tribute to this extraordinary woman.