You are here: Home › Army Archives › Salvation Army Continues To Stand With Olympians The relationship between Australian Olympic gold medallist Nova Peris (left) and the Bellarine Peninsula Salvos carries the legacy of Salvationist Peter Norman (pictured on the left of photo two) at the 1968 Olympic Games when he stood in solidarity with athletes giving a human rights salute.

When Australian sprinter Peter Norman stood in quiet solidarity with athletes giving a human rights salute at the 1968 Olympic Games, the Melbourne Salvationist forever tied his faith to a global commitment to inclusion, equality and justice. 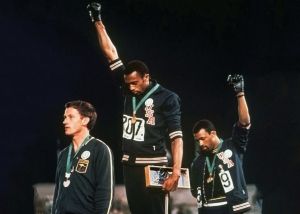 Top: Australian Salvationist Peter Norman (left) stood in solidarity with US sprinters Tommie Smith and John Carlos as they gave a human rights salute at the 1968 Mexico City Olympic Games. Bottom: Tommie, Peter and John are pictured here in this photo taken before Norman's death in 2006. They all remained close friends, and the United States Olympians were pallbearers at Norman’s funeral.

Only minutes before the 200m sprint medal presentation, Tommie Smith (gold medallist) and John Carlos (bronze medallist) told the 26-year-old Aussie schoolteacher and devout Christian of their plan to use the occasion for their protest. Without hesitation, Norman reportedly said, “I will stand with you”. He even suggested Tommie and John share the black gloves used in their salute after Carlos left his pair at the Olympic Village.

Norman, who had won the silver medal, stood silently beside them, his badge for the Olympic Project for Human Rights glinting under the stadium lights. He came home and was ostracised for his actions, unofficially sanctioned for taking a stand.

It’s a thin thread tying The Salvation Army to the Olympic Games, along with the many chaplains, volunteers and athletes who have kept the story going. But with all eyes now on Tokyo, you’d be forgiven for missing another monumental moment that happened 54 years later right here in Australia, between Olympian Nova Peris and the emerging leaders at Bellarine Peninsula Salvos in Victoria.

Nova was the first Aboriginal woman to win an Olympic gold medal after being part of the successful Australian women’s field hockey team at the 1996 Games in Atlanta, USA. She later switched to running and won gold in the 200m race at the 1998 Commonwealth Games in Kuala Lumpar, Malaysia, and also competed in the 2000 Olympic Games in Sydney.

On 15 July, Peris, a Murran and Bunitj woman, attended the unveiling of a 2.2-metre-high statue made in her honour at Melbourne’s Federation Square. Sculptors Gillie and Marc Art designed the bronze likeness in collaboration with Yorta Yorta and Dja Dja Warung descendent and artist Jandamarra Cad. And the team from the Bellarine Peninsula Salvos were right there with Nova, celebrating the momentous occasion with her.

“We got to know Nova in 2020 as part of our Youth Ambassador Program, and the kids involved last year that couldn’t do anything because of lockdown,” explains Corps Officer Captain Peter Hobbs. “So, it was good for them to come and support her. This is so significant for us because the Bellarine Salvos are passionate about empowering and including Indigenous culture into everything we do.

“Our going was purely relationship building – there with no strings attached to that gathering other than to support her. She is such a great ambassador for women and Indigenous people.”

The statue’s significance can’t be overstated – it was created as part of the Statues for Equality initiative, which redresses the lack of gender diversity and representation of black, Indigenous and people of colour in Australian public statues. The bronze likeness of Nova is the first statue of an Indigenous woman in Australia and a part of only 1.5 per cent of statues depicting women in the country. Twenty-five years since the Atlanta Olympics, it seems fitting that Nova has been immortalised not just for her athletic achievements but also for the way she is shifting Australian culture.

After she retired from elite sport, she was awarded an Order of Australia in 2007 and became the first Indigenous woman to be elected to the Australian Parliament in 2013 as a member of the Labor Party.

Today, she is a motivational speaker and an official ambassador for the Australian Aboriginal Education Foundation, which provides scholarships for Indigenous students. The avenues that connected Nova to The Salvation Army as a guest speaker enabled her to build relationships with the Bellarine Peninsula Salvos. Olympian Nova Peris’ new statue in Federation Square depicts moments and symbols from her time at the Olympic Games and Commonwealth Games as a sprinter, as well as symbols representing her time as a Hockeyroo, the totems of her peoples in the Kimberley and West Arnhem Lands, and flowers representing family members who were a part of the Stolen Generation.

It’s important to note that Nova, her family, and the Bellarine Peninsula community are purely relational. The Olympian has poured out her knowledge and expertise to their emerging leaders and is shifting the way the corps community navigates their understanding of Country, and the complex history of injustice on Victoria’s south-west coast.

Symbiotically, Bellarine Peninsula Salvos supported Peris on that historic day in Melbourne – standing in solidarity and support and committing themselves to walk the journey of reconciliation, inclusion and equality no matter what the cost, just like Peter Norman did in 1968.

Coincidentally, it is comforting to know that just down the road at Albert Park, there is a statue of Peter – a reminder that it is better to amplify the voices of those who are oft-silenced and marginalised than to step into the spotlight yourself.

And whether your stage is the Olympic Games, the Australian Parliament, or a small event in Melbourne, that is how the Kingdom of God comes to earth. By building relationships, learning, and standing alongside those using their voices to change the world.