You are here: Home › Army Archives › Seizing The Day Was The Early Armys Way

Early Army's way was to seize the day

Early Army's way was to seize the day

While most early Salvationists would not have known the meaning of ‘carpe diem’, Major DAVID WOODBURY says their willingness to think quickly and creatively in response to an opportunity shows they clearly behaved in the spirit of the Latin phrase

Carpe diem: to seize the day

To many in Australia, The Salvation Army is a multifaceted organisation that touches the lives of many in the community. Its influence reaches not only those who are disadvantaged or in need but also into areas of government and the corporate sector.

Many of the programs and innovations reflected in today’s Salvation Army resulted from a spontaneous response to a need, motivated by love for God and man; an immediate response to seize the day rather than the result of lengthy analysis and planning.

The insight and spontaneity of early Salvationists enabled the Army to quickly identify and address areas of human need and opportunities for mission.

In 1885, five years after the Army commenced in Australia, field secretary Major Alfred Barrett was confined to hospital. Barrett soon realised there was a mission field among those confined to hospital and arranged for Salvationists to commence visitation.

In 1897, this became the League of Mercy, a mission that became, for many people, the face of compassionate caring. Today, Salvationists in Australia continue to minister to those in hospitals, nursing homes and other facilities where people need a listening ear and a comforting hand.

On 21 September 1882, the ministry of The Salvation Army was significantly reinforced with the arrival in Melbourne of Major James Barker and his wife Alice, appointed by General William Booth as the Australasia Provincial Commander. Barker proved to be a man of great insight and innovation and impacted The Salvation Army world far beyond Australia.

Soon after his arrival, he was given the privilege of conducting weekly meetings with prisoners in Melbourne Gaol. Barker soon realised that what many of these men needed was a fresh start in life, and he organised a house not far from the gaol where they were provided with accommodation and guidance.

His work with the Prison-Gate Brigade became a model for ministry within courts and prisons throughout the world.

For early Salvationists, it was imperative to find innovative ways to communicate the Gospel. While visiting one of the Army’s Prison-Gate Homes in Ballarat in 1891, Major Alfred Barrett observed the use of a “magic lantern” by the manager, Joe Perry. He was intrigued by the possibilities that such equipment might provide. 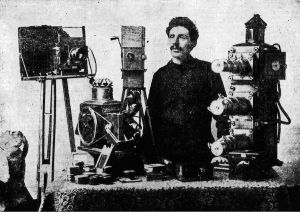 Pioneer in the Australian film industry, Joseph Perry, with some of the early equipment used by the Limelight Department.

Perry was brought to Melbourne initially to advertise meetings to be held there by William Booth. So successful was the venture that a Limelight Department was set up under Barrett, with their first show on Boxing Day 1891, at South Melbourne.

Perry soon realised the potential of the Kinetographic (movie) Camera, invented in 1894, and persuaded The Salvation Army to invest in the new technology. Perry was to make history by producing one of the world’s first audio-visual productions, Soldiers of the Cross, and the Limelight Department was commissioned to record the Federation of Australia. Limelight Brigades were to travel the length and breadth of Australia and New Zealand, drawing large crowds to hear the Gospel message.

In 1891, severe flooding in the Brisbane area gave The Salvation Army its first experience of ministry during an emergency. Many people were made homeless by the floods, and Salvation Army halls were quickly utilised to provide shelter and meals. The Army’s ministry during natural and man-made emergencies has become to many an illustration of ‘Christianity with its sleeves rolled up’.

Today, the Army has a fleet of specialised emergency services vehicles available to meet the needs of those traumatised by disasters.

While many of the Army’s early leaders in Australia, such as Charles Jeffries, were not native to this part of the world but originated from England, they were not daunted by the vast expanses of the bush.

In 1887, Jeffries, then-Divisional Officer for Southern NSW, secured the loan of three horses and a caravan to extend the ministry into many remote rural areas.

The Cavalry Forts, as they were known, proved to be a great innovation in not only spreading the Gospel but also establishing new Salvation Army corps. Similar travelling units were also established in other parts of Australia.

Taking the opportunity to seize the day, pioneer Salvationists in Australia developed many diverse aspects of Christian ministry and service. While these early pioneers had little concept of the extent to which The Salvation Army would impact the community as it does today, their faithfulness in planting mustard seeds has resulted in many mighty works.

Their obedience to God’s leading, their willingness to innovate and take risks, and their “holy boldness” provided a secure foundation on which generations of Salvationists have built today’s Army. This stands as an example of what can be achieved when men and women are fully obedient to the leading of God’s Spirit.