You are here: Home › Army Archives › Sparks That Lit A Fire Of Salvation Part 1

Sparks that lit a fire of salvation - Part 1 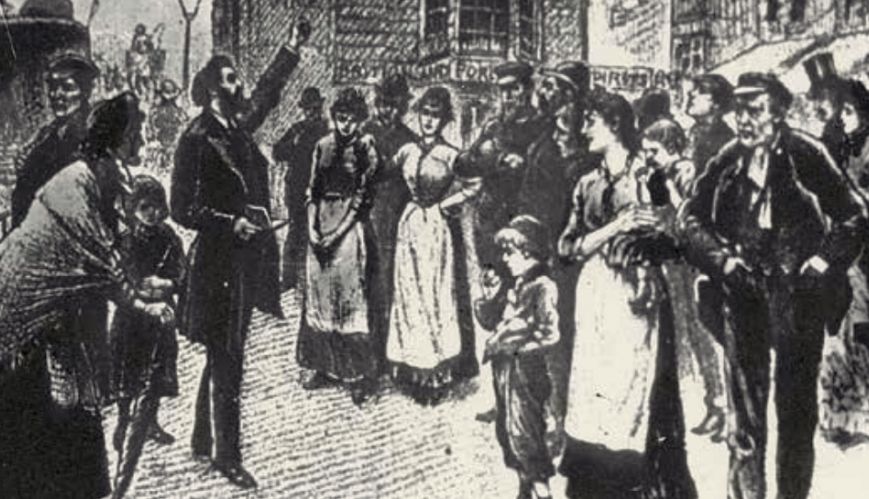 Sparks that lit a fire of salvation - Part 1

An illustration of a young Reverend William Booth preaching on the streets of London with his Christian Mission.

The early life of William Booth was anything but promising. He was born in Nottingham, the third of five children, on 10 April 1829 to Samuel and Mary Booth. In that era, Nottingham was an important centre for manufacturing clothing material, but life was difficult for most families who existed on poor wages.

It would appear that, initially, the Booth family was well off, as they could afford to employ domestic help. William’s father was a builder and was obsessed with making money. Around 1837, he experienced a significant business failure. The family found themselves under financial strain, resulting in William being withdrawn from the private education he was receiving at Biddulph’s Academy in the city. 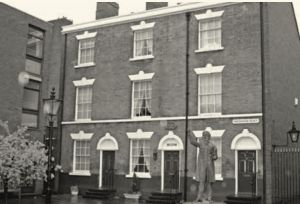 William Booth’s birthplace in the village of Sneiton in Nottingham, England. He was born on 10 April 1829.

One of the most formative influences of William’s early life was his mother, whom he described as being an unselfish and compassionate woman. He later recalled that she aimed to make others happy, particularly regarding her children and domestic help, and that no beggar ever left her door empty-handed. It may well be that her influence on his life was to mark out his later ministry to the poor.

Because of the family’s deepening financial situation, William was forced to leave school at age 13, and his father apprenticed him to Francis Eames, a pawnbroker. This was a life that was little more than legalised slavery; a life William was later to refer to as a “humiliating bondage”. Here the young William was exposed to the sheer poverty and oppression of the working-class masses, which was undoubtedly instrumental in forming his strong social conscience later in life.

Perhaps one of the most meaningful influences in the early life of William Booth were Mr and Mrs Dent, who took a genuine interest in the tall, gangly teenage boy. His resemblance to their deceased son resulted in them inviting William to their home, an invitation he readily accepted, no doubt influenced by the presence of their two teenage daughters. Occasionally, William would accompany them to the Broad Street Wesley Chapel, a place that was to become crucial in the spiritual journey of William Booth.

While attending the chapel, he was challenged about his spiritual life and, in his own words, had a “sense of the folly of spending my life doing things for which I knew I must either repent or be punished in the days to come”. It was here, in a small basement room that William knelt and determined that “God should have all there was of William Booth”.

Whatever the encounter entailed, God lit a fire in the heart of the young Booth that was never extinguished.

William was soon to make the acquaintance of Will Sanson, an enthusiastic evangelist. Sanson persuaded William to accompany him, with a small group of like-minded friends, in conducting evangelical street meetings in Nottingham. Although a reluctant participant initially, it wasn’t long before William’s natural ability saw him become the leader of the group. William and his group were making a significant number of converts, and it seemed only fitting to him to bring his new converts to the Broad Street chapel.

However, it appears that the regular presence of a large group of young ruffians did not sit well with the church authorities, particularly as William often placed them in the seats reserved for the more wealthy parishioners. Finally, the church leadership told William that he was to bring his ragtag bunch through the back door and seat them in the more obscure pews. Here he was to have his first lesson in the resistance of the established church to his evangelical efforts.

In 1849, William Booth moved to what was then the world’s largest city, London. Not wanting to go back to his old trade as a pawnbroker, he soon found himself among the ranks of the unemployed. Finally, not being able to find employment, William reluctantly went to work for another pawnbroker at the Elephant and Castle, William Fillmer, renting a small room above the shop. 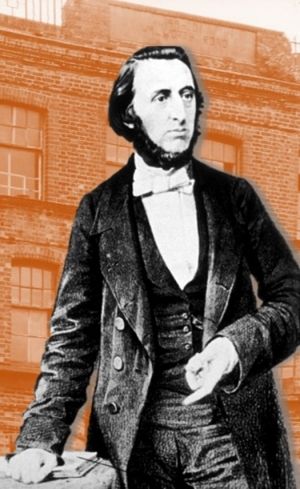 William Booth is his preaching days with a Wesleyan reform movement.

William began attending Walworth Wesleyan Chapel. It was not long before his talents were recognised, and he began to serve as a lay preacher at Walworth and other churches on the circuit. The fire that burnt in his soul led him to offer himself to ministry in the Methodist Church, but he was informed that “preachers of his type were not wanted by the Methodist Connexion”.

He resigned as a lay preacher, fully intending to retain his membership of the Walworth Wesleyan Chapel. However, the minister refused to renew William’s membership, effectively expelling him from the church. For a while, he toyed with the idea of serving as a chaplain on an Australian-bound convict ship.

Nevertheless, William’s fiery preaching style had caught the attention of Edward Rabbits, owner of a chain of footwear shops. Disillusioned with the stagnation of the Methodist Church, Rabbits, along with many others, left the established church to join a Wesleyan reform movement. The reformers soon welcomed the disillusioned William Booth into their community.

His preaching at Binfield House, the reformers’ chapel in Clapham, impressed the congregation – among them a young lady called Catherine Mumford – to the point where Rabbits persuaded William to resign from the pawnbrokers and enter into full-time ministry.

When William raised the issue of funds, Rabbits offered to underwrite his stipend of 20 shillings a week for the first three months. Quitting his job with the pawnbroker on 8 April 1852, William found lodgings on nearby Prince’s Row and set his feet on a path that was to change the course of religious history.

Part two featuring the life of Catherine Booth will appear next Friday.