You are here: Home › Army Archives › Tea For Transformation A wrapper from a Hamodava tea packet around the turn of the 20th century.

By 1750, tea had become the national drink of England, and in 1788 it was part of the cargo manifest on the First Fleet. It didn’t take long for tea to become part of the Australian way of life.

There was money to be made in importing and selling tea, and Commandant Herbert Booth, in command of The Salvation Army in Australia in the late 19th and early 20th century, saw the market as a means of financing the work of the Army, particularly its missionary work. In 1888, Commandant Booth appointed Adjutant Ashley Lamb to enter the tea market as a fundraising enterprise. Tea was marketed through the local Salvation Army corps and Salvation Army representatives, and several agents. 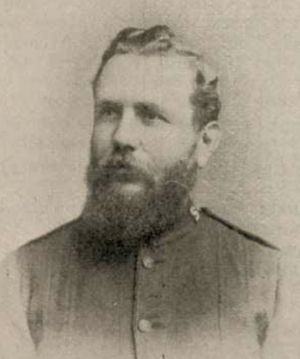 Adjutant Ashley Lamb was appointed in 1888 to start a Hamodava tea fundraising enterprise in Australia.

An advertisement in the Port Macquarie News and Hastings River Advocate on Saturday 13 February 1909 from the local agent, a Mr Orr, clearly spelt out the philosophy behind the venture into the tea market:

The Tea
WITH A DEFINITE OBJECT
“TO MAKE OTHERS HAPPY”
Because every penny of wholesale profit made by the sale of “HAMODAVA” is spent on that work. This includes the whole of the beneficent undertakings of The Salvation Army, which are directed to helping the needy wherever they may be found. Our Officers, day after day, year after year, spend their lives in searching in the villages, in country towns, in the suburbs of the great cities and also in the darkest slums for those to whom they can extend a helping hand. – Mr Orr, Local Agent.

Adjutant Lamb’s initial response was to acquire tea from local merchants and resell it from his office at Territorial Headquarters in Bourke St, Melbourne. So successful was the venture that
a warehouse was purchased in Westwood Place, Melbourne, where Lamb, now a Staff-Captain, began to blend his own distinctive product now known as Hamodava tea; Hamodava being a Singhalese word for salvation. So successful was the blend that larger warehouses were acquired, with a building in Smythe’s Lane, off Lonsdale St, behind Her Majesty’s Theatre still carrying a faded Hamodava sign.

As well as local agents, officers were appointed with the sole purpose of promoting and selling the tea. An advertisement in The West Australian newspaper of Saturday 14 February 1903 listed a number of meetings taking place around Perth. One advertisement promoted Captain Wyatt, Hamodava traveller, as the leader of a meeting at the Midland Junction Public Hall. The product was well received in Western Australia, with the Kalgoorlie Miner of Thursday 21 September 1905 reporting that Hamodava tea was the popular and favourite drink of the miner.

With the success of the enterprise, coffee and cocoa were added to the Hamodava range. An advertisement in The Western Champion and General Advertiser for the Central-Western Districts of Saturday 26 September 1908, by the local merchant Mr A Parnell in Barcaldine, Queensland, advertised: Hamodava Essence of Coffee, per bot. 1/-; Hamodava Pure Cocoa, per tin 1/-. The front page of the War Cry in Melbourne on 13 March 1897, launching Hamodava tea.

Corps officers were encouraged to retail the product as part of their fundraising activities, with a percentage from sales going to the local corps. All manner of promotional ideas were utilised by corps officers, with the Euroa Advertiser in Victoria reporting on 21 January 1898 that: “Hamodava [tea], may be purchased at the barracks, Is 4d and Is 6d per lb. The profits from the sales go towards missionary work, the officers receiving a slight commission in furtherance of local work.” Hamodava tea tasting was part of the evening’s entertainment in many harvest festival programs.

There is no doubt that early officers were an enterprising bunch when promoting The Salvation Army and its ministry. The Dubbo Liberal and Macquarie Advocate of Wednesday 23 August 1899 ran the following report: “‘Fun in the Army – The humorous side of Salvation Army warfare’ is to be treated in a lecture by Ensign Sam Renshaw at The Salvation Army barracks on Thursday evening. The lecture has been delivered in several other towns and is described as one full of entertaining recitals of amusing adventures in the Army’s work. A small charge is made for admission, in return for which, however, sample tins of the Army’s famed Hamodava tea will be distributed to patrons.”

The product continued until 1930, when competition from other importers made the enterprise unviable. However, during those years, The Salvation Army had assisted peasant farmers in southern Asia to purchase their own land through a scheme financed by its Hamodava tea enterprise.