You are here: Home › Army Archives › The 95 Year Divide 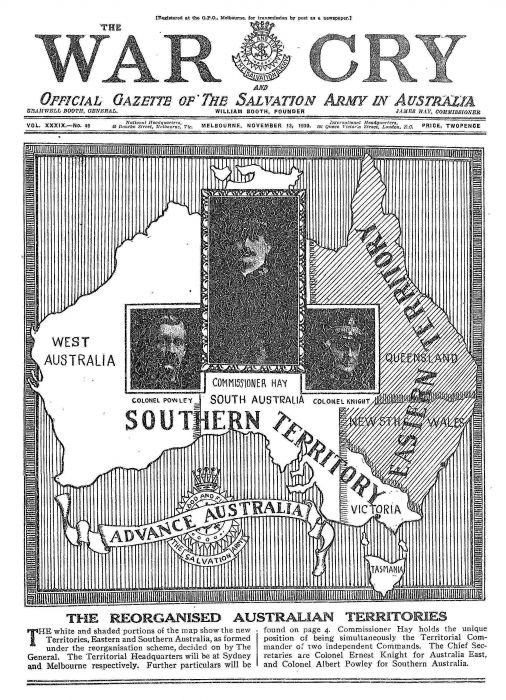 Front page of the War Cry on 13 November 1920 announcing the division of the territory.

There is no definitive answer in Salvation Army history books as to why The Salvation Army in Australia was split into two territories at midnight on 1 January 1921. We know that the challenges of how to administer large territories and inspire evangelism and corps growth was often discussed at International Headquarters in London. Without the modern conveniences of efficient and cost-effective transport and modern methods of communication, it is easy to imagine that breaking large territories down into smaller, more manageable chunks, seemed like a good idea.

Canada was the first to be divided. It was split in 1915. India followed in 1920 when it was divided into three distinct territories and by 1924 two more India territories had been created. Also, in 1920 the United States was split into Eastern, Western and Central territories, with Southern formed in 1927. Australia was also divided at this time but who initiated this and for what reasons seems to have been lost in history. Most likely it was proposed by either Commissioner James Hay, then territorial commander for Australia, or General Bramwell Booth who visited Australia in early 1920.

However the idea developed, it seems little was reported in Salvation Army publications and it was left to Sydney’s Daily Telegraph to keep the soldiery informed through items like this published on 29 April 1920: “The arrival of General Booth, chief of the Salvation Army in all lands, is being awaited with considerable interest by his followers in Australia, because of some very important changes that are pending.”

The article went on to detail the proposal to divide the nation into Australia Eastern and Australia Southern territories due to the fact that, “the administrative work that the area now superintended by the commissioner is far too great for one man to be expected to be in control; that much valuable time would be saved if the chief were not expected to travel from Perth to Sydney or Melbourne to Brisbane at frequent intervals of the year as occasion demanded, and that generally matters would be better for all concerned if the continent were divided between two ‘territorial commanders’ with equal powers”.

The Daily Telegraph printed a further item on 12 June 1920. It announced that The Salvation Army in NSW and Queensland would be administered from a new headquarters in Sydney. It also noted that the rest of Australia would continue to be controlled from headquarters in Melbourne. It wasn’t long before the wisdom of splitting large countries into different territories was being questioned. The depression in the early 1930s saw the rejoining of the two Canadian territories. Australia may well have gone down the same path, with the depression crippling its finances and the demands for assistance overwhelming.

However, in 1929, Joseph Gill, a grazier of Winderradeen Station (near Goulburn), died and left most of his estate (valued at the equivalent of several million dollars today) to The Salvation Army. This gift meant the Army in Australia could meet its debts and survive intact as two territories.

This is an edited excerpt of an article written for Hallelujah! magazine by Major Ken Sanz. Above photo courtesy of Australia Eastern Heritage Centre.