You are here: Home › Army Archives › The Evangelical Entrepreneur 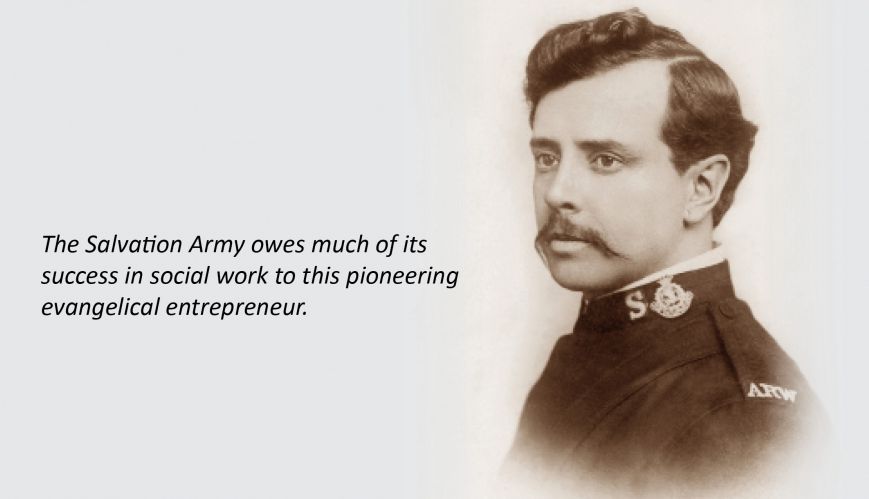 James Barker in the late 1800s at the height of his influence as a Salvation Army officer. The ARW on James’ shoulder signifies ‘Australian Rescue Work’.

Of all The Salvation Army pioneer officers, James Barker stands out as someone who could make things happen, writes Major DAVID WOODBURY

Within his short life, James Barker pioneered many of the social ministries that epitomise The Salvation Army today. Sent by the Army’s co-founder, William Booth, to take over the newly established work in Australasia, James and Alice Barker were to write their names into the annals of Salvation Army history in Australia.

James Barker was born on 17 January 1852 in Ipswich, about 100km north-east of London. Coming from an Anglican background, he was apprenticed to a printer and trained as a compositor, a trade that would serve him well in later years. Desiring to be his own master, he ran away from home, intending to join the military. However, when faced with the discipline of military life, he changed his mind and returned to the print trade in London.

Drawn to a ragtag crowd of Christian Missioners, Barker found himself at one of their meetings. The speaker seemed to be directing his message at Barker, who soon became convinced of his sinfulness and found himself at the mercy seat, accepting Jesus as his Saviour.

The Christian Mission’s philosophy of putting new converts to work saw him given a job in the organisation’s printing office. He came under the notice of Booth, who saw potential in the young man. By 1878, he had become an officer in what was now The Salvation Army.

Following his only corps appointment in the Manchester 1 Corps, Booth felt Barker was the man to take over command of the newly established work in Australasia. Barker was engaged to Alice Sutton, a soldier of Bethnal Green Corps, so Booth conducted their wedding in 1882, promoting them to the rank of major and commissioning them to take command “in all the colonies of the Southern Seas”. The very next day, Major and Mrs Barker sailed on the SS Cotopaxi, bound for Adelaide.

Due to a labour dispute on the Adelaide waterfront, the Cotopaxi was diverted to Melbourne. The Barkers disembarked not knowing anyone in the city and with only a few shillings in their pockets. However, their arrival had been noted by William Whitchurch and Captain Isaac Unsworth, an English officer temporarily in Melbourne, who met them on the dock.

Accommodation was found, and it wasn’t long before Barker was introduced to Dr John Singleton, a meeting that proved highly significant both to Barker and The Salvation Army.

Dr Singleton was an ageing, passionate social reformer who not only made his mission hall available to Barker but also arranged for him to hold religious services inside the gaols and also visit prisoners, an event that was to launch the Army’s worldwide court and prison ministry.

Barker’s forceful and charismatic personality proved an invaluable asset in attracting and holding an audience. Although not tall, his military bearing and dark glowing eyes, together with his quick mind and decisive action, proved to be the catalyst The Salvation Army needed to commence its ministry in Melbourne. By the end of 1882, he had established a corps in the suburb of Hotham and in January 1883, a second corps was opened at Collingwood.

Under Barker’s command, the Army in Melbourne expanded rapidly. By the end of 1883, it had 33 officers, a two-room office used for the headquarters and was able to publish The War Cry with a circulation of 60,000 copies. Fifteen months after their arrival, meetings to mark the first anniversary of The Salvation Army in Victoria were held in the Exhibition Building and attended by 10,000 people.

Concerned that the men he met in prison would slip back into their old ways after their release, Barker invited them to come to him for help. He acquired a large dwelling in the Melbourne suburb of Carlton, which was opened on 8 December 1883 as what he termed a ‘Prison-Gate Home’.

The Barkers’ social conscience didn’t stop with those in prison. In the back streets of Melbourne, they sought out women addicted to drugs and coerced into prostitution and established a residence where they could escape their circumstances. Before long, Prison-Gate Homes and Rescue Homes for Fallen Women were established throughout Australia and New Zealand.

The training of officers for his fledgling Army also exercised the mind of James Barker. Following his own training experiences, the first three cadets were set to work building the Prahran Hall by day and studying at night. Progress in Victoria was rapid, and two years after the Barkers’ arrival, their command boasted 100 corps, 75 outposts and 200 officers. It may well be that Barker was a ‘big picture man’ rather than a ‘detail man’ as Colonel Ballington Booth and Major T Henry Howard found out when they arrived, following orders from Booth to review the work in Australia. Although their welcome meeting in Melbourne was attended by government ministers, members of parliament and the wealthy, they discovered that Barker had not closely supervised the work, with Howard referring to a corps in NSW as “an army of lions led by asses”.

In 1885, Colonel Herbert Booth, William Booth’s son, assumed command in Australia, with Barker given a lesser appointment to oversee Victoria's work. However, the popularity of Barker, now a colonel, had not waned with now-Commissioner Howard commenting: “Without doubt, the colonel was the idol of the people. Few men in the Army have been the object of more admiration and flattery than he received in Melbourne.”

In 1890, James and Alice Barker were recalled to London to commence ministry among the prisons as he did in Australia. In May 1901, at the age of 49, Barker was promoted to glory after suffering from diabetes for many years.

In no small way, The Salvation Army owes much of its success in social work to this pioneering evangelical entrepreneur.