You are here: Home › Army Archives › The Little Majors Medals

The medals of the 'Little Major' The medals of the 'Little Major'

A life dedicated to helping the poor, the disadvantaged and those with special needs is reflected in the trio of prestigious awards illustrated here.

The Long Service Order on the right of this group was awarded for 25 years of continuous faithful service as an officer in The Salvation Army; this particular example is dated 1927.

The award in the centre is that of a Member of the British Empire, and it was announced in the Queen’s Birthday honours of 1956 as being for “distinguished service to the community”.

The most interesting award of the group is the Order of the Founder to the left of the group. This is the highest honour and acknowledgement of service in The Salvation Army.

The Order of the Founder (OF) was inaugurated in 1920 to recognise Salvationists who had rendered distinguished service, such as would have specially commended itself to the Founder, William Booth, and the ‘OF’ has been awarded fewer than 300 times in just over 100 years. 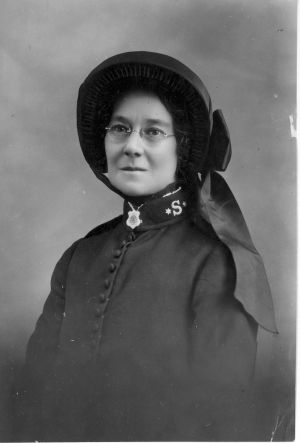 Mary in her younger years as an influential Salvation Army officer in Melbourne.

This particular OF was the first one granted to a female Australian Salvationist and was awarded in 1943 for “a sacrificial and remarkable blessed ministry as Police Court Officer in the City of Melbourne, highly appreciated by magistrates and the public, also powerful in influence among wrongdoers of many degrees”.

Major Mary Anderson MBE OF was the deserving recipient of these awards. The stories of her work in the courts are legend. She was never concerned with religious denominations, and her vibrant faith in God meant she never gave up. She had a wonderfully spontaneous sense of humour and the knowledge and tenacity of purpose to see a task through, which meant that many of the women and girls who came before the magistrates were assisted and rehabilitated. The courts placed great reliance on her judgement, and many young women were kept out of prison by her intercession and acceptance of responsibility for them.

Mary was a highly respected Justice of the Peace, was given a Life-Governorship of the Royal Melbourne Hospital, invited to become an Associate Member of the National Council of Women, appointed a Life Member of the Honorary Justices Association, and was the first Vice-President of the Probation Officers Association of Victoria.

She retired officially in 1935 but continued her police and courts work for a further 11 years until actually retiring in 1946.

Mary – the ‘Little Major’ – died in 1956, and her funeral service was held in the Melbourne City Temple. The Temple was crowded out with judges and barristers as the courts had closed that morning as a sign of respect to the Little Major.

E.W. Tipping devoted his whole feature headlined ‘In Black and White’ in the Herald-Sun newspaper to a description of her funeral service as the City of Melbourne paid tribute to a selfless ‘Advocate for the Troubled’.