You are here: Home › Army Archives › The Rise Of Catherine Booth

The rise of Catherine Booth

The rise of Catherine Booth

Salvation Army co-founder Catherine Booth was a woman ahead of her time, and her partnership with fiery evangelist William was a true union of heart, mind and spirit.

Over recent years, Salvationists have begun to ask questions about the place of The Salvation Army in the modern world. There is a renewed interest in looking at the early days of the Army to find what many early Salvationists knew and understood about their movement and just what we may have lost along the way; most significantly, the place of Catherine Booth, not just as “the mother of The Salvation Army” but as a notable figure in Victorian England, both for the church and in the history of modern feminism.

In 1864, the year before William and Catherine Booth set up the Christian Mission, the British Government passed what was called the Contagious Diseases Act. It became a significant marker on Catherine’s journey into some of the dark places where The Salvation Army was destined to shed light.

The Contagious Diseases Act was set up to try and deal with the huge rise in sexually transmitted diseases following the return of thousands of soldiers from the Crimean War. The law criminalised prostitution by criminalising the prostitutes, not the procurers. Catherine was approached by Josephine Butler, a leading Anglican crusader on women’s issues, to fight to repeal the act. They argued that guilt in that situation, if it’s going to go anywhere, should be with the procurer, not with the women who, by the dreadful circumstances that they found themselves in, were reduced to selling their bodies for sex: radical thoughts at a time when women were treated by law as largely the property of their husbands.

Catherine, in joining this fight for social reform, was not only standing up for principles she had been thinking through for some years regarding the place of women in society but also with the tradition of evangelical social action going back to the founder of Methodism, John Wesley, and the fight to end slavery.

Over the past century, we have come to associate evangelical Christianity as principally concerned with getting souls saved and putting them securely in the lifeboat to heaven. But this was not the tradition of Catherine Booth and the early Army. Catherine’s understanding was that God created men and women who are all radically equal before God and that we are responsible for building the Kingdom of God here on earth, to make earth as it is in heaven. Social reform was the responsibility of all Christians.

William shared Catherine’s strong sense of social justice. However, as a successful evangelist, his focus was on getting people saved so that they, in turn, could save others, and eventually, as they became better people, society was changed for the better. But Catherine was doing something different. She argued that our social structures carry sin with them – that the structures help create the situation where sin thrives – so we have a duty just as we do to reform people, to actually reform the structures.

The ‘maiden tribute’ campaign was probably the most sensational British tabloid story of the late 19th century. It was centred on the scandal of widespread child prostitution.

The age of consent in England had remained fixed for more than 500 years, at 12. For poverty-stricken families in the desperately overcrowded slums of industrial England, the sale of children into the sex trade could be a last desperate bid to survive. Eventually, in 1875, the age was raised by one year, to just 13. To reformers, Catherine Booth among them, this seemed only to confirm the reality and evil of the trade.

The issue was also close to the heart of Anglican feminist and reformer Josephine Butler, who had drawn Catherine into the campaign to change the Contagious Diseases Act. In this new campaign, their efforts were facilitated by leading journalist and editor of London’s Pall Mall Gazette, W.T. Stead. 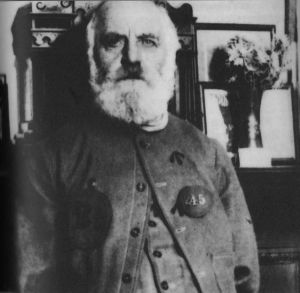 W.T Stead created an uproar with his newspaper ‘sting’.

In 1885, Stead came up with what could be described as perhaps the first newspaper ‘sting’ operation. He intended to expose this whole trade by setting up a front for a brothel and arranging to purchase a young girl. To oversee the scheme, a small committee of leading citizens, including the Roman Catholic Cardinal Henry Manning, was established. Stead and Catherine’s son, Bramwell Booth, undertook much of the' sting' organisation. To execute the operation, they enlisted the service of a reformed brothel-keeper, Rebecca Jarrett.

Jarrett was set up as a procuress and arranged to purchase 13-year-old Eliza Armstrong for five pounds from her alcoholic mother, with the mother’s full consent that the girl would be put in a brothel. Stead was there, in hiding, recording the entire transaction.

The young girl was then taken to another room where a Salvation Army matron spirited her away to a place of safety. Stead then published the entire account in the Pall Mall Gazette under the headline, ‘Maiden Tribute in Modern Babylon’. Such was the sensation that it is said the young George Bernard Shaw raced down to Stead’s office, grabbed as many copies of the newspaper as he could and went out to distribute them. Society was in an uproar.

Up to this point, Catherine and Bramwell Booth were the key Salvationist participants in the project. As soon as the story broke in the Pall Mall Gazette, William Booth swung the public efforts of The Salvation Army behind the collection and presentation of a massive petition to Parliament of 393,000 signatures calling for a change in the law. They succeeded, and the age of consent was raised to 16. Young girls were protected.

Through the 1880s, Catherine continued to develop her views about The Salvation Army and its purpose. The following quote gives a terrific insight into her thinking at the time: “A barracks is meant to be a place where real soldiers would be fed and equipped for war, not a place to settle down in or a comfortable snuggery to enjoy ourselves,” she stated. “I hope that if ever they, our soldiers, do settle down, God will burn their barracks over their heads!”

This is a woman who wasn’t prepared to stop.

In 1888, Catherine again joined forces with W.T. Stead and others, including Annie Besant, one of the founders of Theosophy, and Emmaline Pankhurst, the great campaigner for women’s suffrage, in a crusade against ‘White Slavery in London’. It led to 1400 women taking strike action against the poor wages and appalling conditions under which the ‘match girls’ of London were forced to work. Most horrifically, the matches were made with poisonous yellow phosphorous, leading to an illness known as ‘phossy jaw’ involving facial disfigurement and often death. Midway through the campaign, Catherine herself became ill and was diagnosed with breast cancer.

William’s ideas on social reform had also been developing through this period. His thinking was made public in 1889 in an article he called ‘Salvation for Both Worlds’. He wrote: “As Christ came to call not saints but sinners to repentance, so the New Message of Temporal Salvation, of salvation from pinching poverty, from rags and misery, must be offered to all.”

As Catherine’s illness confined her to home, William began to work on a coherent vision of ‘Temporal Salvation’. Stead, who had become close to Catherine and William, came alongside to assist. According to one account, William set up a study outside Catherine’s bedroom where he and Stead would work on the manuscript, and William would take their notes to Catherine for discussion and correction. 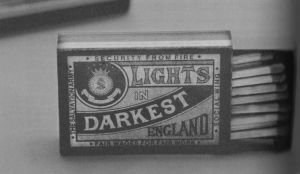 The safe matches produced by The Salvation Army.

Booth’s book, In Darkest England and the Way Out, was published in October 1890, the same month Catherine was promoted to glory. The book was a comprehensive plan for social reform of British society and the transformation of the wider world. It rapidly became the subject of controversy, some even suggesting the real author was not Booth, but Stead. But even here, Catherine’s voice can be heard. In one of the first and most successful ventures of the ‘In Darkest England’ campaign, the Army purchased a match factory, changed the method of manufacture, and raised the worker’s wages. By 1901, the match industry was transformed. The Match Girls had won.

Today, the ‘Lights in Darkest England’ campaign, as it became known, also raises the question as to what extent the whole of ‘In Darkest England’ is underpinned by Catherine’s social and theological worldview.

In his study of Catherine Booth, John Read says not only was Catherine “a powerful advocate for social reform”, but she was also “the visionary thinker whose ideas inspired the movement’s radical departures from churchly norms and the principal architect of the Army’s theology”.

Catherine Booth’s role in shaping The Salvation Army as an evangelical and social mission-focused movement cannot be downplayed. She was a woman ahead of her time, and her partnership with fiery evangelist William was a true union of heart, mind and spirit. The question for us may be, how much of the Army’s future depends on recovering that spirit?

(To find out more, read Catherine Booth, by John Read).