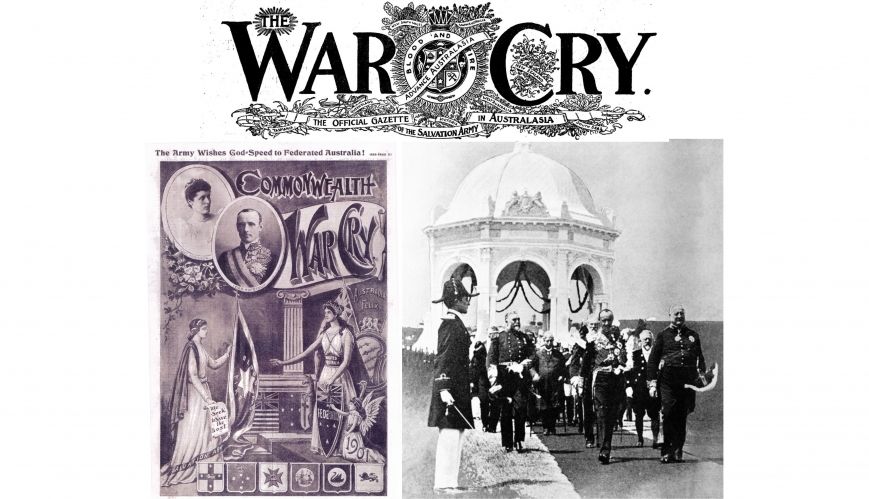 In the push for Federation, The Salvation Army’s War Cry adopted a new masthead incorporating an Australian coat of arms and an ‘Advance Australasia’ banner. Also pictured is a slide from the Limelight Department’s federation film of Lord Hopetoun departing the Rotunda after signing the Federation document (right) and a special edition Federation War Cry.

In 1897, The Salvation Army was to use its central publication, War Cry, to support not only the message of goodwill to all men but also the drive towards a federated Australia, writes Major DAVID WOODBURY

In the late 1890s, Australia was in the grip of Federation fever as its separate colonies, which had developed independently since European settlement, explored the possibility of nationhood.

Among the most vocal supporters of Federation was The Salvation Amy, through its official publication, War Cry. The Army saw in Federation something of the all-inclusive concept of the Bible, where we are “all one in Christ Jesus” (Galatians 3:28 NLT).

The cover of the Christmas issue of War Cry for 1897 depicted a multi-racial group holding The Salvation Army flag. The accompanying article suggested that “in the midst of the colonies, there has been for many years a living object lesson in Federation. The Salvation Army is the embodiment of it.” 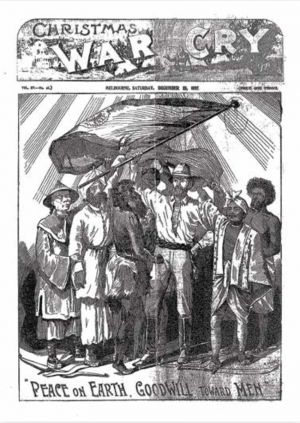 The cover of the 1897 Christmas War Cry was used to promote the push towards Federation in Australia.

War Cry was referring to the quickly expanding internationalism of the Amy, which by 1897 saw it at work in Europe, the United States, South America, Australia, New Zealand, Sri Lanka, and Africa.

The Army saw this concept of multi-racial inclusiveness as part of the fabric of its Christian ethos. The article was to go on, “No jealous-eyed local government, no hostile tariff laws, or complicated questions, militate against the harmony existing in our great brotherhood.”

Such a sense of internationalism had not always been part of Army ethos. In its early years, The Salvation Army’s co-founders, William and Catherine Booth, seemed to have little interest in anything outside its ministry in the United Kingdom.

William was focused on the immense need he saw around him in England and was to tell his wife in 1865, “Where can you go and find such heathen as these, and where is there so great a need for your labours?” Catherine, for her part, was opposed to any overseas ministry.

All this was to change by 1880, the year The Salvation Army spontaneously commenced operations in the United States and Australia.

Driven by this expansion, William Booth announced to a meeting in the Exeter Hall during October 1884 that a great international gathering was being planned. In 1886, just six years after the Army had ventured from English shores, its first international Congress saw Salvationists travel from Australia, Canada, France, India, Ceylon [now Sri Lanka], New Zealand, South Africa, Sweden, Switzerland, and the US to attend.

The concept of multi-racial inclusiveness was one of the stated objectives of the congress, “That, there may be a great increase of that brotherly love and mutual sympathy, which at present so largely prevails but which it is very desirable should be increased.”

In the drive toward Federation, the Army in Australia saw its own structure as an example of what could be achieved when men and women worked together toward a common goal regardless of race or colour. In a season where there was a focus on goodwill and joy, it sought to gather a divergent group of individuals from various ethnic backgrounds and reinforce the central message of the Prince of Peace.

The 1897 Christmas War Cry went on to report, “This Christmastide the whole of the Salvation federation will spread abroad the fame of Christ in back block and city slum, and in all parts of the commonwealth they will make men feel that the principles of the kingdom of Jesus Christ are established in their hearts, and in the fullness of their love toward all men will seek to bring them into harmony with the Prince of Peace.”

By that year, people of many races had become part of an international Salvation Army, enabling it to demonstrate a unique ability to embrace all cultures and strata of society. One of the geniuses of The Salvation Army is its ability to cross social, cultural and ethnic divides. Its capacity to speak with corporate and political leaders in the corridors of power is matched only by its ability to minister to the dispossessed and starving masses in many of the 127 countries across the world where the Army now operates.

In no small way, this is influenced by a theology and mindset that sees all people as equals in the sight of God, as well as a sweeping and all-inclusive internationalism. Whenever Salvationists meet in international gatherings, such as international congresses or a High Council [to elect a new world leader], a mixture of skin colours, cultures, and languages is apparent, characterised by a remarkably similar viewpoint and a commitment to a common belief and purpose. Here there is a oneness of mind and spirit and a sense of equality and brotherhood. Not only do Salvationists subscribe to the same doctrine, but they also share a great mission and a vision of a world redeemed by the love of God.

I have experienced first-hand this unique sense of oneness and brotherhood which binds Salvationists regardless of race or culture.

For several years, I was given the task of producing the Army’s Self Denial Appeal promotional video for countries in the Western South Pacific and found myself being hosted by Salvationists in many countries worldwide. I was overwhelmed by the unique sense of brotherhood and collegiality I experienced when visiting these countries.

In supporting the Australian Federation in the 1897 Christmas War Cry, The Salvation Army reinforced the mindset to which William Booth had come. Writing to his son-in-law, Frederick Booth-Tucker, in India, Booth stated, “In order to conquer you must stoop, becoming with the apostle Paul all things to all men ... to the Indians you must be Indians ... Go to the Indians as a brother, which indeed you are, and show the love which none can doubt you feel.”

When Paul urged the Corinthians to “become all things to all men that they may, by all means, save some”, he probably had no concept of an international Salvation Army that would encircle the world almost 2000 years later with the good news of God’s love.