You are here: Home › Features › A Lesson For The Scripture Teacher

A lesson for the Scripture teacher A lesson for the Scripture teacher

One of the students produced a lighter from his pocket and set the lesson plan during the Scripture class.

Many years ago, I volunteered to be a high school Scripture teacher.

After several years of doing youth work for the Salvos, I felt sufficiently fit for the task. I had visions of young students responding to my Bible presentations and enthusiastically joining my church youth group within the first couple of weeks.

“Scripture teaching can’t be that hard,” I thought with a touch of arrogance as I put a lesson plan together. “I’ll tell the kids a story or two from the Bible and then give them a quiz. Easy.”

Now, I’m not sure whether it was my lack of training or that I didn’t bring the right lollies to class, but the year 9 boys assigned to me simply didn’t want to listen to my lesson plan. In fact, when I handed out worksheets, one of them produced a lighter from his pocket and set his on fire.

It went downhill from there, and a teacher in an adjoining classroom needed to rescue me from behind a desk when the boys started pelting lollies back at me. It was chaotic.

Undaunted, either through wide-eyed naivety or rash bravado, I decided to give it another go the following week. This time, however, I had another plan. Bribe them.

Basketball was all the rage at the time, so I made the following announcement at the start of the next lesson: “Ok boys, give me one minute of your time, and I’ll give you 39 minutes of basketball.” As most classes were 40 minutes long in those days, the boys thought that was a pretty good deal and went along with it.

I held the boys’ attention for perhaps 45 seconds, giving them a quick outline of who I was, what I did and why I was there before they rumbled out the door and onto the court in the nearby gymnasium, where I nervously joined them in a rough and tumble game.

The following week, I asked for two minutes of their time, giving them 38 minutes of basketball. This pattern continued, and I felt like I slowly gained an ounce of respect over time. By the end of Term 1, I had gained their attention for 12 minutes. My basketball skills had unwittingly improved out of sight, but, more importantly, I felt I had built a small bridge of trust with the boys.

By mid-year, I managed to broker a 50-50 deal – 20 minutes in class and 20 minutes on court. But it was a hard slog. Just when I thought I’d made some progress during my few precious minutes of class time, one of them would break wind or fall off his chair or make a smart comment that resulted in an uproar.

In desperation, I enacted another plan. Ask God for help. So, I prayed. 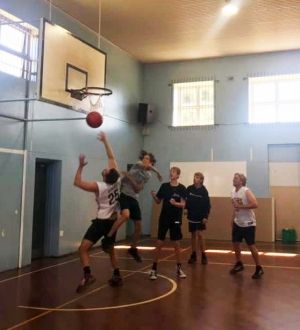 Basketball became an integral part of the class.

It wasn’t until I handed over the class to God, and let him lead, that an amazing transformation occurred. The boys started to ask questions. Not simple questions. Hard questions. Questions about life, about their stresses and anxieties, about God and faith, about war and death, and the big question: where was God and what was he doing about all the world’s problems?

So, we talked. Openly. Each boy began sharing from his heart, and, in some ways, the boys took the lead. They’d come up with a subject or a question, have their say, and I’d give the biblical perspective, focusing on God’s love for them. And one day, perhaps a week or two before the end of the school year, they talked until the bell rang. One boy, wide-eyed, suddenly exclaimed: “Hey, we didn’t get to play any basketball!”

I retained that class the following year. And it was an awesome year. Now year 10 students, the boys shared, they discussed, they argued, and they were unruly at times, but they bonded. I’ll never forget the time when a boy’s mother died, and when he returned to class all the other boys gave him a huge group hug for five minutes and tears were shed. Oh, and we never did get back onto the basketball court.

Years later, I ran into one of the boys, now grown up, and he told me that many of this class were still in contact with each other. He shared that he had a deeper relationship with them than some of his other friends: “I just find it easy to talk about life with them,” he told me. “And we just support each other on another level when life gets tough. Sometimes, you know, I think it all stemmed from that Scripture class.”

And then it all made sense to me. My original lesson plan was exactly that – my plan. But God had other plans for that class. I wanted instant success as a Scripture teacher, but, really, I had no idea. God simply wanted me to hand over that class to him, have patience and facilitate relationship and connection with the boys.

The Bible says something about this: “‘For I know the plans I have for you,’ declares the Lord. ‘Plans to prosper you and not to harm you, plans to give you hope and a future” (Jeremiah 29:11).

What’s your plan in life? Are you forging ahead by yourself, or is God leading the way? Hand your plans over to God, and you’ll be amazed at what he’ll do with them.

DEAN SIMPSON IS PART OF THE COMMUNICATIONS TEAM FOR THE SALVATION ARMY AUSTRALIA.