You are here: Home › Features › A New Day Breaks At Preston

A new day breaks at Preston A new day breaks at Preston

The spirit of freedom is palpable at Preston Corps in Melbourne’s inner north. Enter through the double doors, and a wave of relief washes over you – as if fears and worries about the outside world evaporate. To some extent, they do. The Preston community went through the trenches of multiple lockdowns and COVID surges last year, yet the local Salvation Army has witnessed an extraordinary breakthrough in recent months. Not only are new people connecting through programs, but corps members are posturing themselves outwards, and it’s become the norm to welcome every newcomer like they are a long-lost friend.

“After a difficult year with COVID, this has been such a reward. Prayer has been a big breakthrough point,” shares Corps Officer Captain Tara McGuigan. “This year, particularly, we are really putting our energy into connecting with the community. We are seeing the results. People are just walking in off the streets!”

Story after story rolls off Tara’s tongue as she tells me about the latest members of the corps family. I hear about Alice, manager of the Northern Terrace Supported Residential Services in Reservoir, who works with people experiencing mental health issues and homelessness.

Alice connected with the Salvos through their Street Outreach Ministry at Preston Oval when she chatted with the outreach leader Marty Stewart. Alice and her team were invited to the Sunday service, which she happily attended. While enjoying morning tea afterwards, she learned that the corps hosted ‘Just Song’, a music therapy program catering to people with different abilities. So, naturally, Alice began bringing along a group of clients to the program – and they joined her at the next Sunday service! Two months later, and Alice has been back every Sunday. The corps is now bussing a group of her clients to and from the program and Sunday services every week. They are also coming to a community lunch each Thursday.

“Alice brings people to programs and Sunday meetings, and they stay after,” says Tara. “People come around them, and their faces light up. Once, one of the men refused to leave the church because he just didn’t want to go!”

I also hear about Emelio, who had attended his first Sunday meeting a few weeks prior. There’s no hiding in the back pews at Preston because no sooner had he been warmly welcomed than over the next weeks he brought his mother and a friend. Now a regular and willing volunteer who helps pack up after the service, he also joined a group of collectors at Marvel Stadium to fundraise for the corps’ ministries.

“People just came around and talked with Emelio. Then he showed up at the men’s Bible study on the Tuesday!” says Tara.  “Emelio is so engaged and such a blessing to the corps.”

Alice and Emelio are not rarities at Preston; they are just two of many people who have wandered into the church and found themselves a home. Damian Rawlings, the coordinator of Preston Salvos Project M (M for Men, Mission and Men’s Mental health), puts his barista skills to work following a Palm Sunday meeting in March. On the same day, Preston conducted its annual Self Denial Altar Service, raising more than $20,000 towards the international mission of The Salvation Army.

Some visitors connect to the corps through their twice-weekly Street Outreach Ministry and then attend the corps for its Thursday community meal. Fathima, a grandmother originally from Turkey, attends the community lunch and brings her grandson Zain, who is about five years old. He has never spoken, smiled or got out of his pram during the entire time they’ve been coming.

“A couple of months ago, I invited them to our Sunday church,” says Tara. One of the young mothers warmly welcomed them, and the next thing I saw Zain out of his pram, sitting on the carpet playing Lego with some of the other kids. They now attend regularly on a Sunday, and Zain happily goes off with the other kids to JAM [Jesus and Me – Sunday school], and he joins Fathima after church with all the other families for morning tea.”

Meanwhile, with Alice’s prompting, bandmaster Stuart Lees, who runs Just Song, is looking into the corps band playing at Alice’s workplace regularly and holding a sausage sizzle. And did I mention that the corps recently dedicated a new six-burner Jumbuck barbeque, donated by their local Bunnings during an Anzac Day concert presented by Preston Band? Oh, then there was the multicultural service and meal in March that boasted foods from no less than six different nations.

It’s enough to make anyone’s head spin. But that’s the beauty of God’s divine timing – because even though the McGuigans and the corps community are a part of this, they credit God as the one directing it. And after a year where the church doors were all but closed due to COVID, every member is reaping the fruit of God moving among them and their community.

“The difference is the freedom – that has been a massive spiritual breakthrough. I can’t name it, but God is so present,” explains Tara. 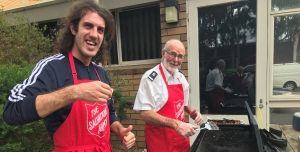 Emilio Viegas (left), a recent addition to the Preston Salvos team, and long-time member Alan Russell cook for Preston’s Anzac Day barbecue. It was the first time the new six-burner barbeque was used after being unveiled during the Anzac Day service and concert at Preston last month – a donation from Bunnings Northland.

“We have lots of new people coming that say there’s freedom in the church. And every Sunday, we use different people to lead songs, give testimonies, and read Scriptures. Everyone is equal here. Everyone has a part they are playing.”

Just as God declared he was doing a new thing in Isaiah, the people at Preston Salvos are experiencing a renewal in their life as a community of worship, faith and mission. And it’s because everyone is on the same page, poised to welcome in the newcomer and play their part.

“The whole corps is amazing. I’ve never seen anything like it!” says Tara.