You are here: Home › Features › Above And Beyond The Call Of Duty

Above and beyond the call of duty Above and beyond the call of duty

The Salvation Army Emergency Services (SAES) in Victoria connected with the Doon Reserve Caravan Park community after the 9 June floods last year. In the months following, they helped the community farewell a friend. Top left: Members of the Ringwood Corps band play at Bob’s memorial service. Bottom Left: A memorial for Bob, with two plants in remembrance of his life. Right: SAES volunteers serving residents after the storms in the Yarra Ranges.

When storms raged across Victoria in June 2021, thousands of people were impacted by flash flooding, power outages and, sadly, loss of property.

The Doon Reserve Caravan Park in the Yarra Ranges was hit hard, with about 50 people helplessly watching their lives wash away before being evacuated to temporary accommodation 50km away in Rowville. Top: Adam Clark and his team of SAES volunteers set up the Emergency Services truck outside the Rowville International Hotel in June to serve residents of the Doon Reserve Caravan Park who had been evacuated there after flooding. Bottom: A drawing of the iconic SAES truck by one of the younger residents.

Yarra Ranges Council needed someone to take charge of the situation, and that’s when they called Adam Clark, Assistant State Head of the Victorian Salvation Army Emergency Services (SAES).

Twelve hours after the storms hit on 9 June, people needed food and basic supplies while processing their trauma. Adam and his team of volunteers, including Moonee Valley Corps Officer Captain Erin Mains, set up the SAES vehicle outside the Rowville International Hotel. But what could have been a one-off event turned into an ongoing relationship and made way for a friend’s send-off.

“One of the most difficult [aspects] was that this caravan park is quite isolated and remote. They all really wanted to get home, and they were displaced in a completely different setting. It would have been quite traumatic for them,” reflects Adam.

With the hotel kitchen closed due to COVID-19, the SAES became the emergency relief hub. Adam and the team fed the residents three meals, provided them with underwear, toiletries and clothes, and gave them a space to arrange assessments for disaster payments. This was essential, but what they needed most was a chat.

“I went along to help feed people, and through that, we formed a relationship. Some people had been living in the caravan park for up to 25 years,” said Erin. “Guys would come up before mealtime to the coffee station and have conversations [with us]. I remember sitting in the carpark while they sucked on their beers, just talking about life. One man was walking around in socks ... so I went down to Kmart and got him a pair of shoes.”

Captain Erin Mains leads the memorial service for Bob at the Doon Reserve Caravan Park. Some members of the Ringwood Corps band also attended to play for guests.

Over the next few weeks, the SAES continued to support the Doon Reserve Caravan Park residents, as well as serve at relief centres from Belgrave Heights to Healesville.

When it was safe for the caravan residents to return home some months later, Adam and Erin were thrilled when they were invited to visit them.

“We found out that some people in the caravan park hadn’t applied for funding, so I arranged a barbecue,” says Adam. “and we agreed that Erin would come because she would be the meat between sandwich for residents and the council for paperwork so they could receive compensation.”

During this time, Erin learned that one of the popular residents, Bob, had died.

“I was shocked. [Bob] was the cohesiveness – he was on their doorstep. He fed the kookaburras in the park. And they [the residents] knew if there was a problem, he was there,” says Erin. “He was a character, and when he passed, there were new COVID-19 restrictions in place, so no one else knew as he wasn’t living in the park at the time. The first anyone knew was a couple of weeks later.”

Bob’s long-term unit had been bulldozed, and there was no funeral. So, when residents expressed they would like to hold a memorial for their friend, the Salvos were happy to help out. And it soon became a community effort.

“The Yarra Ranges Council jumped on board, as did Anglicare and the Red Cross. It was a huge multi-organisation thing. And the best part was I put the call out saying I needed a band – and some members of the Ringwood Corps band came!”

With the strains of ‘Amazing Grace’ and ‘Abide With Me’ echoing through the valley, Erin conducted a memorial service for Bob in the caravan park, with refreshments offered afterwards. The Salvos also planted kangaroo paw and grevillea bushes in the place where Bob’s unit had once stood so that his legacy, a legacy of love, would stay forever in the Doon Reserve Caravan Park. 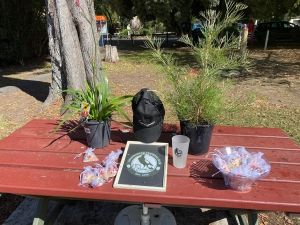 Captain Erin Mains helped the Doon community set up a memorial for Bob in lieu of a funeral. Pictured here is a tribute to his beloved Collingwood Magpies AFL club and two native plants placed in the ground where his unit once stood. Attendees then threw birdseed over the area in honour of Bob.

“[The SAES] went from feeding [the residents] from one night to two weeks, to an extended relationship where we could honour them and Bob through a horrible flood that happened, and yet it wasn’t a once-off,” Erin shares. “These guys are completely forgotten in the middle of nowhere. It’s a huge community just needing to be loved. And they have been loved.”

For all the call-outs that the SAES receive, some stay with volunteers long after they’ve finished handing out hot meals and coffee. For Adam and Erin, their time with this community was more than an emergency – it was an encounter with people made in the image of God.

“It’s about what we do in emergency services. At the end of the day, to have a faith discussion with someone is why we do what we do,” says Adam. “From the storm right through to where they are today carrying on with their lives, building their community and looking out for one another – it’s quite a special community.”