Experiencing a life-changing adventure while enabling transformation in the lives of others is the focus of The Salvation Army’s new initiative, the Adventure Fundraising Program (AFP). In partnership with Inspired Adventures, the AFP is focused on inspiring ordinary people to do something extraordinary for a cause they are passionate about.

The AFP organises treks, rides and runs throughout the year in which individuals, corporate groups, families and friends can take part. No relationship with, or knowledge of, The Salvation Army is required. All participants pay a registration fee, their expenses for the adventure, and raise additional funds to a set minimum target. The Salvation Army will then use these funds to help change the lives of the most marginalised, at-risk, and vulnerable people in our communities.

“The funds raised by trekkers through the adventures they experience will have an enormous impact on Australians in crisis and Australians who desperately need a helping hand,” says Peter Cleave, Territorial Development Manager (Special Projects), who coordinates the treks. “The funds will go toward Salvation Army social welfare programs that service community needs and enrich people’s lives. These include services in areas such as homelessness, youth, emergency and disaster response, recovery (drug, alcohol and gambling addiction), and rural services. The AFP will assist the trekkers to set up an online fundraising page, provide fundraising tips, as well as training and preparing for their chosen adventure.”

The AFP’s first adventure was the sevenday trip to conquer the famous Larapinta Track in Central Australia, in May. The adventurers spent five days trekking sections of the Larapinta Track from the old Alice Springs Telegraph Station to the peak of Mount Sonder and along the backbone of the West MacDonnell Ranges – taking in the breathtaking scenery, breaking out of their comfort zones, learning more about the work of Oasis and the broader Salvation Army, meeting personal goals and bonding as a group. They experienced the diversity of desert habitats, learned the history of the local Indigenous people and slept under the stars. 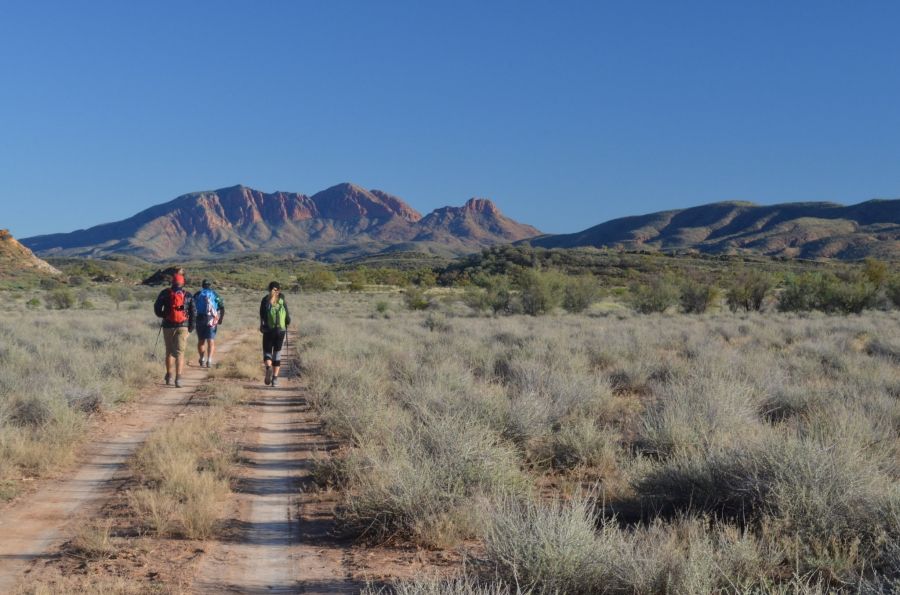 The adventurers spent five days trekking sections of the Larapinta Track from the old Alice Springs Telegraph Station to the peak of Mount Sonder and along the backbone of the West MacDonnell Ranges.

Highly motivated, the 10 trekkers had all met, and exceeded, their fundraising goals – with just over $40,000 going to The Salvation Army’s Youth Support Network, Sydney. Peter Cleave; Major Bryce Davies, Sydney Inner City Mission Director; Katie Kirkpatrick, Oasis Youth Worker; Mark Dalgleish, Salvation Army Advisory Board member, and his wife Sophie, represented The Salvation Army on the trek. A corporate group from Virgin Mobile, including one of the team’s spouses, made up the rest of the trekkers.

At the end of the trek, Major Davies and Peter interviewed the adventurers about their motivation for going on the trek, their expectations, their experience, and whether they would recommend the treks to others. They were unanimous in their positive reviews, glowing recommendations and reports on how the trek had challenged and changed them physically, mentally and emotionally.

“The trip exceeded all expectations,” said Mark. “They definitely undersold it. The majesty of the environment, the culture and fitness angles, and making a tangible contribution to the work of Oasis ticked off all the boxes for me.”

Peter Cleave was also delighted with the outcomes from the trek. “It was good to be able to spend the week talking about life with trekkers, giving them a greater understanding of The Salvation Army and the difference we make on the ground to individuals,” he said. “The treks are designed to be challenging and reflect in many ways the challenges the people we are helping go through. By doing the challenge together, the trekkers also share a great bonding experience.”

Other events this year include the “Salvos Striders” – runners in various sporting events around the country, including the City2Surf in Sydney, the Bridge to Brisbane in Brisbane, and the Army’s Aged Care Plus Walkathon, to raise money for The Salvation Army’s services and programs. Together, the 10 trekkers rasied over $40,000 for to The Salvation Army’s Youth Support Network.

In 2017, the Kokoda Track in Papua New Guinea, one of the world’s greatest treks, is the destination for AFP trekkers. The Kokoda Track traverses the rugged Owen Stanley Range, tropical rainforest and passes remote villages. The 12-day trip in April includes the nine-day 96km trek, Anzac Day ceremony on Brigade Hill, a visit to Bomana Cemetery and a look at key Salvation Army programs in Port Moresby, PNG’s capital. Significantly, 2017 marks 75 years since the Kokoda Campaign in WWII. The adventure has been named the Salvos 2017 ANZAC Kokoda Trek.

“This historic track is a great fit for The Salvation Army, as the “Sallymen” – Salvation Army personnel – were there on the track in 1942, making a difference to the lives of the troops on the front line,” said Peter. “Now it’s our turn to do something to help change lives.” During the 1942 Kokoda Campaign, 650 Australian soldiers were killed and more than 1000 injured, fighting the Japanese invasion force. Salvation Army personnel served drinks and snacks to the men, as well as provided encouragement and support.

“Not for the faint-hearted, this truly is a oncein-a-lifetime adventure on which, with every step you take, you will be helping The Salvation Army empower hope, recovery and resilience for Australians who need it most,” said Peter. “The trek will certainly test your endurance, improve your fitness and help us raise funds for the Red Shield Appeal to transform lives and help where the need is greatest. “This trek is also being offered in the Australia Southern Territory, and places are limited.”

In the lead up to the trek, AFP will organise monthly training treks out of Sydney, and possibly Brisbane and the Sunshine Coast also. Already signed up and training for the trek are three family groups – a father and son, father and daughter, and father with two sons. “This is a great bonding experience for the families as they work together to help make a difference in the lives of people doing it tough,” said Peter. 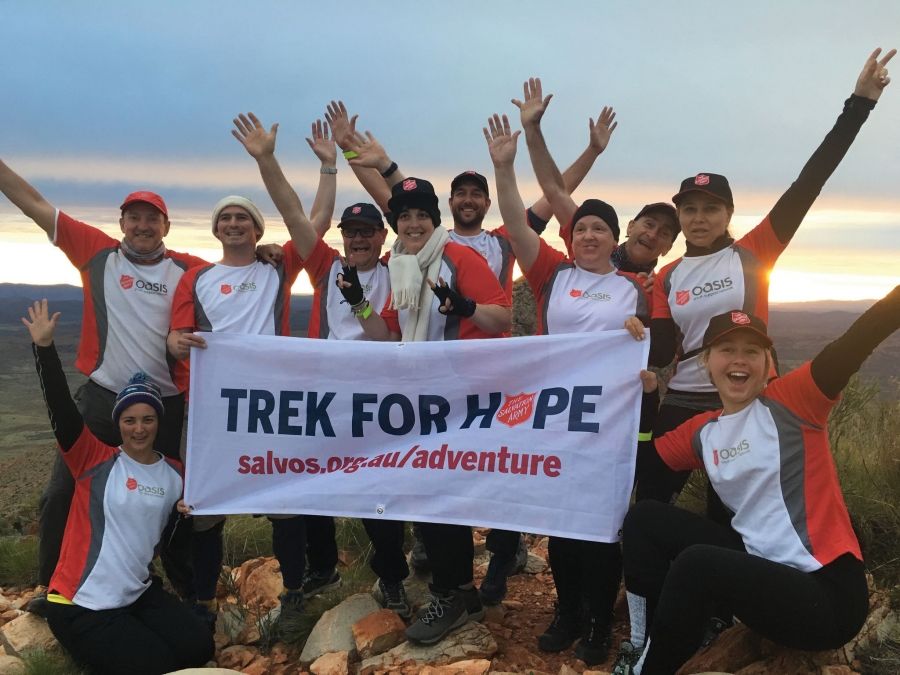 The trekkers celebrate their achievements on reaching the top of Mount Sonder on the Larapinta Track.

Gympie business owner, Gary James, and his son, Brad, are preparing to conquer the Kokoda Track together, in honour of Gary’s two uncles who were killed in PNG during WWII. “For me this is a meaningful way, on behalf of my family, to show respect for the men who fought in PNG and honour the sacrifice they made,” said Gary. “Without their bravery and dedication we would not be able to enjoy the life we now lead in Australia."

The AFP will announce its 2018 adventure destination in the near future. “It will be an easier trek than Kokoda, and more broadly appealing,” said Peter. “There is definitely demand for Kokoda though, and we will go back there. All these treks, no matter their destination, are life changing experiences.”

For information about upcoming treks and other events, go to salvos.org.au/adventure.