You are here: Home › Features › Aussie Officers Around The World

Aussie officers around the world Aussie officers around the world

The Salvation Army officially commenced in Papua New Guinea on 31 August 1956. Papua New Guinea became an independent command in 1994 after 38 years as part of the Australia Eastern Territory, and was elevated to territory status in 2000.

Work began in the Solomon Islands (a South Pacific nation of hundreds of islands) in 2010 and was officially recognised on 1 February 2011. There are a number of Australian officers serving in the Papua New Guinea and Solomon Islands Territory.

Colonels Kelvin and Julie Alley, based in Port Moresby, lead the territory.

Captain Christine Gee is the Director of Health Services in Papua New Guinea, while Majors Rob and Vanessa Evans are the District Officers in the Solomon Islands.

In this land of extreme beauty, poverty and social unrest, The Salvation Army’s focus is on a number of areas: the growth of the church, social services including restorative justice and settlement ministries, health services, education, and development projects.

Three motels also help generate income for the territory. Ministries respond to the unique needs of the country. In Top Town just outside the city of Lae, there is a community of women, many with children, who are trapped in the sex industry in order to sustain a livelihood.

Many of the women are victims of domestic violence, which is rampant in the country, while others are separated or divorced. For them, this work is a matter of survival as there is no social security in PNG.

The Salvation Army works with the children, providing a basic education. “We also have a unique fellowship [small church] here, a fellowship made up entirely of sex workers,” explains Kelvin.

“With the influence of The Salvation Army, the ladies have built their own chapel in the bush.” Julie adds: “The ladies came to our recent women’s Bible weekend and sold billums [handmade carry bags] to finance the trip. Ours is a community where they are loved and not condemned, and they know it. Women from divisional headquarters are also involved in teaching them skills to earn an income in other ways. Many made decisions for Christ that weekend.”

Education is a key focus area in the territory, with several elementary and primary schools, a driving school, computer school and childcare centre. The Salvation Army is also focusing on teaching gender equality through its educational and corps programs. Health services, directed by Captain Gee, are spread around the country, including in some of the nation’s most remote regions. 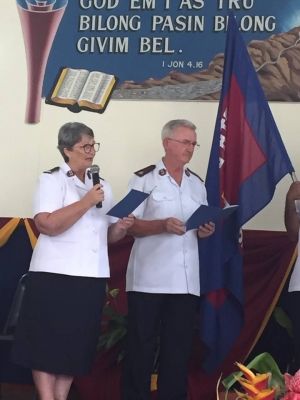 “We have the best urban clinic in Port Moresby, run in partnership with USAid,” says Kelvin. “This clinic serves the broader community – people who can’t afford health care – and specifically targets the high-risk population for HIV.”

There are four centres in the country which test for and treat HIV. There is also support for those suffering from tuberculosis, as well as maternal health and infant care services. The Salvation Army is growing across the territory.

“We are seeing many new corps openings, which is both exciting and a little bit scary,” says Kelvin.

“Our territory is just ripe for the growth of the church. People here value their Christian faith, they hear about The Salvation Army and want to be a part of this movement. Financially we live on empty tanks, tipping in enough fuel as we drive in order to just keep going. The Lord blesses us though. He is faithful and we completely trust in him as we lead Papua New Guinea and the Solomon Islands.”

There are five expressions of The Salvation Army in the Solomon Islands: Gateway Corps, Gou’ulu Mission, Honiara Corps, Moscom Fellowship, and Ramah Fellowship.

They are spread across islands and seas, making travel, which is largely by small boats and trucks, challenging and time-consuming.

In the first 11 months of 2018, 23 senior soldiers and 45 junior soldiers were enrolled across the country. Home League and Sunday school are also growing, and there are six Wednesday night fellowship groups operating throughout Honiara with an average attendance of 120 per week across all groups.

Majors Rob and Vanessa Evans, who are based in Honiara, are focused on raising the profile of The Salvation Army in the country.

“We’ve started by using the local coffee shop as our office, so everyone around knows us now,” laughs Vanessa.

“We’ve just recently had an emergency services trailer donated to us and are planning to use this for ministry during natural disasters, but also at events such as the upcoming general election. This will give us good exposure to the public.” 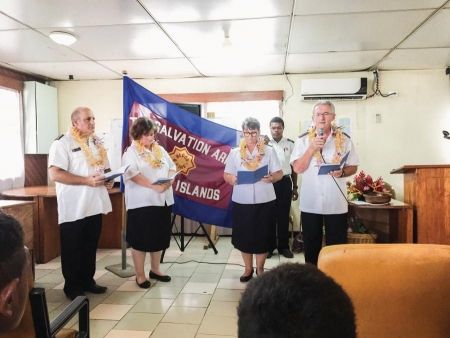 The Evans’ are also focused on helping The Salvation Army in the Solomons become more self-sustaining.

In partnership with Kokonut Pacific, the Army is planning to open a coconut oil extracting plant in North Malaita to help fund mission in the country.

“The Army already owns the equipment for this plant. We will employ locals in the operation and the income the coconut oil brings will help us achieve our goal of eventually being self-funded,” says Vanessa.

In addition to being a District Officer for the Solomon Islands, Vanessa is also District Director of Women’s Ministries.

“It’s really hard here for women to get into leadership and yet these ladies are some of the hardest working women I’ve ever met,” she says.

In July, The Salvation Army held a conference at Gateway Corps in North Malaita, bringing together Gateway Corps, Honiara Corps and Moscom Fellowship for the first time.

“During the conference they were dancing, speaking out and praising God that they were free from negativity and thinking they were not good enough for anything – which is what their society teaches them,” says Vanessa.

“To see the spiritual change in the women was an absolute highlight for me, that they were dancing and praising and not being afraid.”